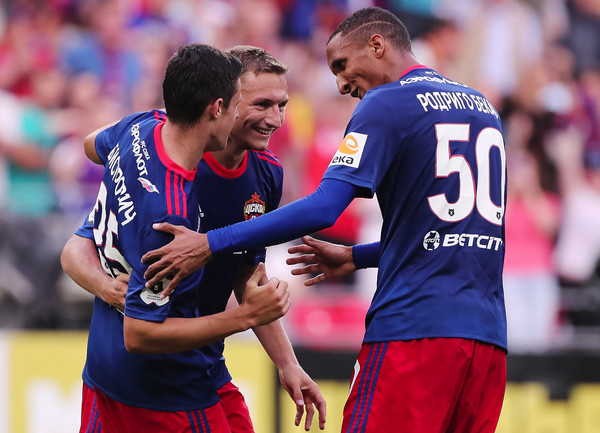 ZL: How do you expect CSKA to cope with the exodus of last summer?

DS: Before the season it was very pessimistic, but they’re doing better than expected so far. The squad is the same size as it was last year so depth is not a pressing issue, but the experience has dropped substantially.

ZL: How have they managed to cope with the exodus? Have they had to change to a new style, have they dropped a level?

DS: The level has dropped, there’s no way around that. The whole defence and midfield left and were replaced by a very young set of players. While there is some genuine talent, the lack of experience still shows in some places. The formation has stayed the same but the style isn’t quite the same. They lost a lot of physicality in players like Wernbloom and the centre halves and so they’re playing a lot of balls into the spaces and keeping the ball low more.

ZL: Of those who left, would you argue that Golovin has left the biggest hole in the team?

DS: I think the defence is the biggest hole after this summer. CSKA’s Cb’s for the last 15 season’s all retired this summer (Ignashevich and the Berezeutskiys) and they’ve essentially had to start from scratch. 15 years without having to worry about signing a Cb and then suddenly needing at least 2 first team ready this summer.

It’s a mish mash back 3 this year too, a young Brazilian with barely 20 senior apps, a youth product who has spent 2 seasons out on loan and Magnusson from Bristol City – it doesn’t inspire much confidence.

In Golovin they have loads of players who can help fill that gap – Vlasic has been brilliant in his role since arriving on loan from Everton, then there is Akhmetov, Oblyakov, Kuchaev, maybe Dzagoev too.

ZL: What would your predicted XI be for the CL?

DS: Based on available squad for next week Akinfeev Becao, Chernov, Nababkin, Fernandes Efremov Bijol Oblyakov Vlasic Akhmetov Chalov. Bistrovic would be a dead certainty but he’s out injured for a few weeks.

ZL: Out of those players, who do you think is the most important player for CSKA?

DS: At CL level it’s gotta be Akinfeev, gonna have to be at his World Cup best and not mess up on the big stage like he has done in the past.

ZL: Who has the most to prove for CSKA?

ZL: What’s one player you can see breaking through for CSKA this season?

DS: That’s almost tougher. Half the squad are breaking through! But the standout for me is Kristijan Bistrovic – so, so talented in midfield. Cost them €400k in January and already one of the first names in the team aged 20. Another big Croatian midfield talent.

DS: Inexperience, well over half this squad will never have played Champions League football before and so it’s gonna be a big test for a lot of them.

ZL: What’s one strength CSKA can use to their advantage to make it into the knockout round?

DS: I’d say home ground advantage but they’re now playing their home games at the Luzhniki, trading familiarity for a bigger crowd. Still, the Russian atmosphere, and as season goes on, climate, will be something they can try and hold over their European opponents.

ZL: Can you talk a little about CSKA’s style of play this season?

DS: CSKA are playing a lot more of a passing style than in previous seasons. They’ve had a large number of shots and attacks, and have been very patient in the build-up to their goals. They’ve also been pressing high and recovering the ball in the opposing half regularly. However they’ve yet to face any of the big sides yet, and they have been somewhat sceptical defensively. Despite some big wins, they still have conceded a lot of shots on their own goal and have been thankful for Akinfeev and some poor finishing.

ZL: Do you expect this new style to be a weakness or a strength against their group stage opponents?

DS: Against Madrid and Roma I expect them to regress into their old style, playing long balls and trying to sit in, but it’ll be tough with the new defence. Against Plzen they’ll concede chances as they have done domestically but I expect them to be the dominant side still.

ZL: What’s one thing CSKA have that you think will catch their opponents by surprise?

DS: Many of the players will have the unknown aspect. Of course with modern scouting and analysis they’ll watch as much as they can, but when some of them have such little first team experience there’s always the chance they’ll pull something out of the bag.

ZL: What’s one player who needs to step up if CSKA are to make it through the group stage?

DS: Despite the minute chances, I think perhaps Chalov. Even if they want to get into the 3rd place slot he’s gotta keep his form up. He’s very much a form player, get him going and he’ll be dangerous, but on low confidence he can have a drought quite easily. Chances will be at premium vs Real and Roma so if one falls his way, he’ll have to take it.

ZL: What kind of striker is Chalov?

DS: Hard to categorise him really. I guess the best you could do is poacher/fox in the box style. I remember Eduardo Da Silva at his peak and it’s similar to him, get it in the box to him and he’s typically very composed, but he can do a bit of everything else.

ZL: How confident are you in Goncharenko’s ability to manage this team?

DS: It should be perfect for him. He brought young players through at Ufa and BATE on a shoestring budget, so he should be able to work well with this group. He’s a fantastic coach.

ZL: What do you make of him as a coach stylistically?

DS: Other than preferring to use 5 defenders, I wouldn’t say there’s an outright style. He’ll adapt to whatever he has. When he left Ufa for CSKA many wondered if he’d bring the 5 defenders since Slutsky tended to use 4, but he did. But when CSKA had injuries last year he happily switched back to 4 again. He’s also switched the style since the departure of Wernbloom and some of the other big guns to be less physical and more technical. Back at Ufa with his weak squad is was very much well drilled defence and quick counters – to great effect.

ZL: Is there one thing the average fan needs to know about CSKA that not enough people know?

DS: It seems obvious to me but there was once a time where I didn’t know so let’s go with this: CSKA is not pronounced as spelled (see ess kay ayy) but just said as one word (sis-kah) in Russian.

That or that one of their most legendary players, whom their former stadium was named after, received such a serious arm injury that he played the last part of his career with it strapped tight to his body, as if he just had one arm- he then served in WW2. Grigoriy Fedotov.