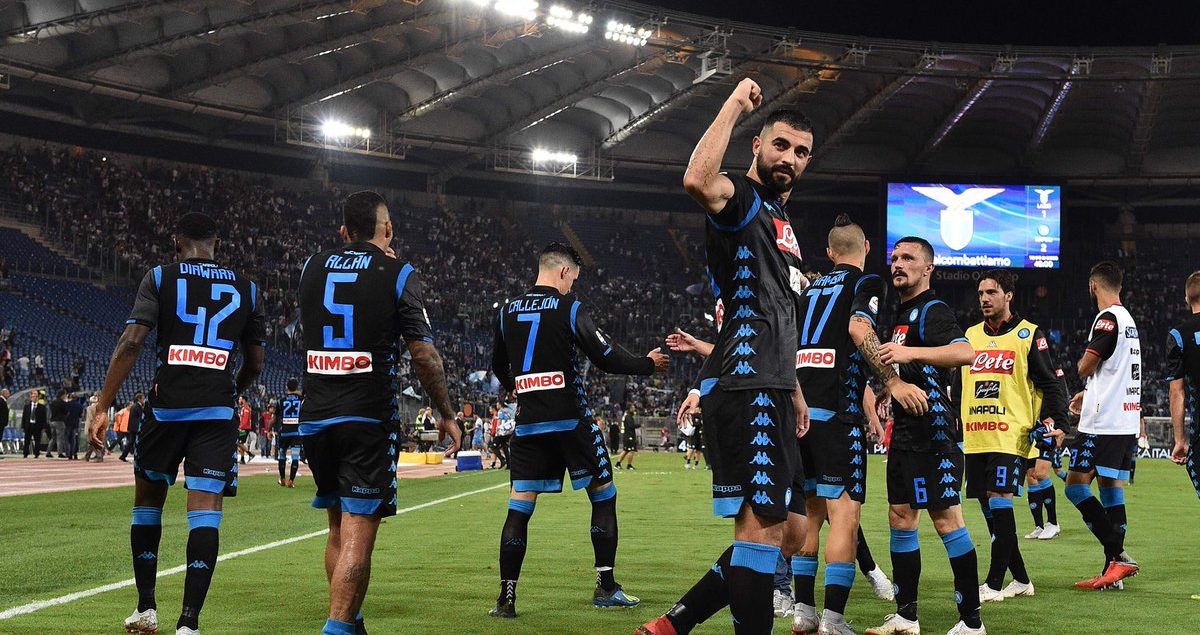 UEFA drew its teams for the UEFA Champions League group stages and Napoli found itself in Group C, aka the “Group of Death.”

It almost seems fitting that the Partenopei found themselves grouped with Paris Saint Germain, which features a former Napoli player still beloved by the San Paolo faithful in Edinson Cavani. Napoli’s summer transfer window was filled with drama as club president Aurelio De Laurentiis would take part in “True or False segments” on Radio Kiss Kiss Napoli, and even called himself the team’s Cavani during an appearance at the team’s retreat at Dimaro.

Fans had a sense of false hope that Cavani was going to return to the Azzurri after a rumored fallout with Neymar and were sent into a frenzy when fake plane itineraries of an incoming flight to Napoli with the Uruguayan’s name were floating around the internet. In the end, “Edi Torna” will actually happen, but it will be with PSG and teammates Neymar and Kylian Mbappe when they visit the Stadio San Paolo in the Champions League.

Liverpool will also feature in Group C as the Champions League runner-ups from last year’s campaign, which makes the group all the more tough to qualify from for Napoli. The English side actually defeated the Serie A runner-ups 5-0 in a preseason friendly in August, so it’ll be interesting to see how a couple of rematches in a competitive setting will turn out.

Red Star Belgrade closed out the group as the fourth team and secured the difficulty of the group for the other three clubs. Any team that must travel to Serbia will find itself in an intense environment and with the support of its home crowd, Red Star could cost Napoli and some of these other teams some points in the group stages.

Napoli will clearly face the tough task of qualifying out of the group, but those that watch the Serie A know that the Partenopei have what it takes to find a way into the knockout stages if the club plays up to potential. There is a lot of noise made about Napoli not fortifying the squad in the transfer window, but the club’s new additions clearly contradict that criticism.

Carlo Ancelotti: Simply put, Ancelotti is a winning manager in all of Europe. He has won at least one league title in Italy, England, France and Germany, and has won multiple Champions League trophies. Carletto has the winning pedigree that Napoli need and it might be what the club needs in order to take that next step towards a Scudetto and getting deeper into the Champions League competition.

Fabian Ruiz: Ruiz moved to Napoli from La Liga’s Real Betis in a transfer worth €30 million, which was Napoli’s biggest splash in the transfer season. The Spaniard helped Betis secure a spot in the Europa League competition for the 2018/2019 season and had been attracting the eyes of many around Europe.

Ruiz plays centrally in the midfield, but also has the playmaking ability to play the role of an attacking midfielder. He showed what he can do in the preseason, scoring an impressive long-distance strike and proving his influence in the attack from the midfield. He will most likely be ushered in as the new Marek Hamsik being only 22-years old and with the Napoli captain trying a new role deeper in the midfield.

Simone Verdi: Verdi finally joined Napoli from Bologna for a deal worth €25 million. The Italian almost joined the Partenopei last season in the winter transfer window, but elected to finish the season with Bologna.

Verdi will be a welcomed signing as he can play on both wings as well as a more central-forward position. He can use both feet and has proven that by scoring free kicks with both for Bologna. He provides a lot of depth in Napoli’s attack and will likely rotate with the likes of Jose Callejon and Dries Mertens. Napoli will enjoy having a player who is more creative on the ball from both sides of the pitch.

Alex Meret: Pepe Reina departed Napoli for AC Milan and the move was known about before last season even ended, so the club needed to look for another keeper and found him in Alex Meret. The 21-year-old player has been touted as one of Italy’s finest goalkeepers and came over from Udinese on loan with an obligation-to-buy for €22 million. Orestis Karnezis also came as part of a package deal since Napoli needed a backup goalkeeper.

Meret unfortunately fractured his left ulna in his forearm in one of his first training sessions with Napoli and has been out rehabbing the injury, but should be due back in September. The Italian already has Serie A experience and will be ready to take over the starting keeper position once he comes back, but his young age also points towards a long-term plan for Napoli to have a top keeper in place as he matures.

Kevin Malcuit: Malcuit signed for Napoli in a €12 million deal from Lille in Ligue 1. Napoli signed the Frenchman as fullback depth and he will back up Elseid Hysaj at right-back. Malcuit is a much more attacking-minded back than Hysaj and had a solid assist record in Ligue 1. When he’s on the pitch, he will be able to provide a threat down the right side of the field with his ability to send in dangerous crosses and dribble his way into the final third to create opportunities.

Maurizio Sarri: Sarri and his “Sarri Ball” tactics brought joy to many Napoli fans and many football fans alike in his three seasons at the San Paolo. He brought a fluidity to the movement of the ball and created some of the most beautiful soccer in the past couple of years. Sarri wanted his players to play out of the back instead of booming the ball forward and his team’s counter-attacks were something any fan would enjoy.

Sarri came up short by four points in Napoli’s quest for the Scudetto last year after they finished with 91 points – a magnificent feat in club history. Rotation was the manager’s biggest flaw as players seemed to be burnt out by the end of the season, but Napoli fans are thankful for the way of football he instilled in the club.

Jorginho: Aside from Pepe Reina moving on to AC Milan, Napoli only lost one other key player in Jorginho as he moved to Chelsea with Sarri. The deal was worth €57 million.

Jorginho will be missed in the Napoli midfield as the passing general who played the “Regista” role for the Partenopei. His ability to pinpoint passes and shape the field of play from the defense to the midfield, organizing the movement of the ball in the Azzurri midfield was nothing short of spectacular. People may make a big fuss about Jorginho only making short passes, but he has the ability to play accurate long-balls to create scoring chances as well. Amadou Diawara will likely be the one to step up and fill this role for Napoli now.

With three match-days in the books for the Serie A in the 2018-2019 season, Napoli has six points (two wins, one loss) and at times still looks to be working in finding its feet under Ancelotti.

Twice already, in the first and second matches of the season against Lazio and AC Milan did the Partenopei have to come from behind to win the game. Lazio held a 1-0 lead over Napoli in week one and Milan held a 2-0 lead at the San Paolo, but Napoli overcame both deficits to win 2-1 and 3-2 respectively.

The attack has looked just as threatening as last year. Napoli can still counter very well and the buildup play is still exceptional, but the players have lacked a touch in the final third at times, which has cost the squad in being more clinical.

However, the biggest issue seems to be defensively as Napoli has conceded more goals than it has scored: opponents have scored six goals on six shots on goal against the club in the three games.

All of the goals the team has conceded have been great goals, but some of them can even be considered wonder goals. The problem seems to be large gaps of space left open for defenders and some lack of focus on marking opposing players. There also seems to be a gap between the defense and midfielders, which may allow for more long-range takes and more space to create chances. With Jorginho gone, it could take Diawara and Hamsik time to adapt.

Sampdoria handed Napoli its first defeat of the season by a score of 3-0 in Genoa on match-day three (Sampdoria’s first home match of the season).

While the club is in arguably the most difficult Champions League group this campaign, it has what it takes to progress to the next round. Napoli can score goals against anyone, so it shouldn’t be any different against PSG, Liverpool and Red Star. Chances will be created and the team just needs to finish them. The attack and midfield are full of depth.

The biggest question will be if the Partenopei can stop the opposing attack from each team, especially PSG and Liverpool who feature the likes of Cavani, Neymar, Mbappe, Mohamed Salah and Sadio Mané. Kalidou Koulibaly and Raul Albiol will need to be up to the challenge. The midfield will need to help in that battle with the likes of Diawara and gladiator, Allan.

Napoli has a coaching mastermind with a lot of European experience in Carlo Ancelotti and will need to heed his guidance, but also play up to potential if the club wants to qualify from a very challenging group and advance further into the knockout stages.

If Napoli can win its home matches at the San Paolo against PSG and Liverpool as well as earn a tough six points from Red Star, it will be in prime position to qualify from the group. Earning points on the road would be a bonus that can enhance that possibility further.