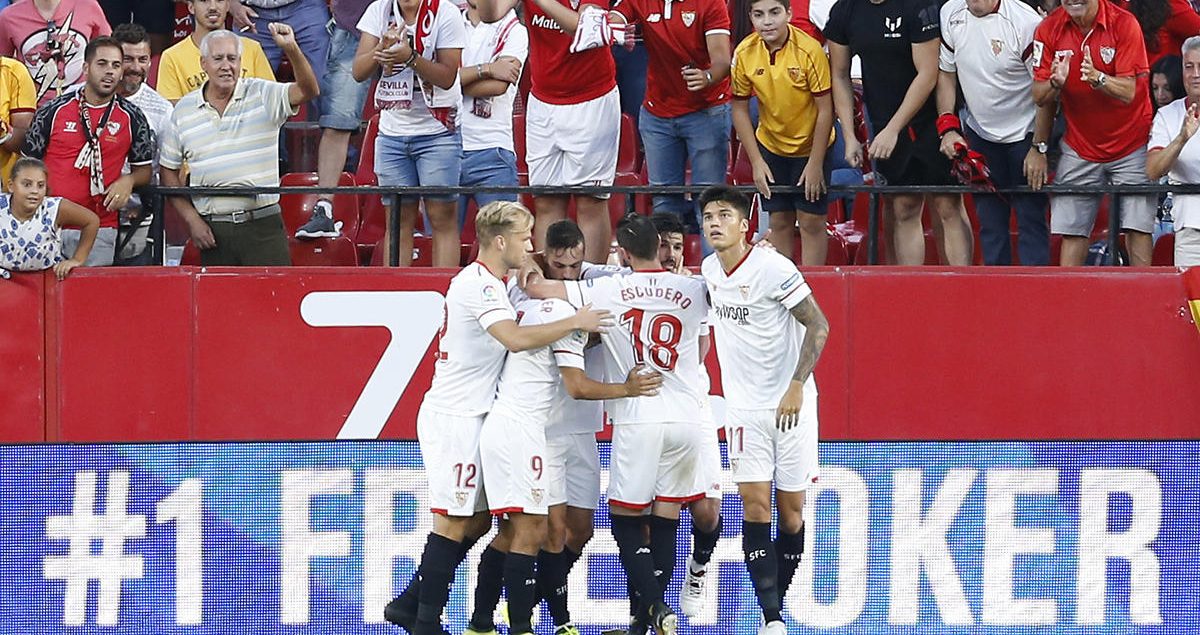 The past season was rather unusual for the fans of Sevilla FC. Under the direction of the Argentine coach Jorge Sampaoli (now manager of Argentina), they achieved the hottest form in their club’s history, and for a moment, they even fought for the first place against Real Madrid and FC Barcelona.

The start of this season was a little more bitter: they lost the European SuperCup (3-2 vs. Real Madrid) and the Spanish Super Cup (5-0 vs. Barcelona) in just 8 days. Little by little, the team improved, and an extraordinary feat against Real Madrid (in an emotional 2-1 performance at the Sánchez Pizjuán, they ended Real Madrid’s 40-game undefeated streak) made them one of the sensation teams of the season. Sampaoli began to be linked with Barcelona (Luis Enrique had already communicated that he would leave at the end of the season) and with Argentina (where he ended up eventually). Jovetic, one of Sevilla’s mid-season reinforcements, became one of Sevilla’s most important players. Talents from N’Zonzi, Ben Yedder, Sarabia, to Tucu Correa strengthened the team a lot. The dream of the Champions League ended in the Round of 16, where Craig Shakespeare’s Leicester defeated it (in which Sevilla missed two penalties). Sevilla ended the season in 4th (only 4 points away from Unai Emery’s record), behind Real Madrid, Barcelona and Atlético de Madrid.

To end the season, Sevilla’s fanbase went at odds with Sampaoli, who also had a controversial dissociation with the club. The team improved, perhaps, in contrast with Unai Emery’s team, but they did not win any titles, and after the Argentine’s departure, another Argentine replaced him: Eduardo Berizzo.

As Bielsa’s ex-assistant, he managed O’Higgins in Chile (a trait he shared with Sampaoli) and won the league for the first time in the club’s history. Then, he quickly made his way to European football, as coach of Celta Vigo. In this team, he had several highlights: he took them to a European competition for the first time in 10 years, and he even made it to the Europa League semifinals (they were eliminated by the eventual champions, Manchester United). Is ‘Toto’ Berizzo a bet? Perhaps yes. But there are few teams in Europe with better scouting and management from the front office. They won’t regret this decision.

Apart from the already mentioned Jorge Sampaoli, another that left the Sánchez Pizjuán is Ramón Rodríguez Verdejo, also known as Monchi. The best sporting director in Europe left Sevilla after 17 years for AS Roma. A hard blow for the Sevillanos. Several players left for other clubs-Iborra for Leicester, Trémoulinas rescinded his contract, Konoplyanka was bought out by Schalke, etc-I think that the players that will most resent Berizzo’s team will be the one that came from loan-Stevan Jovetic (Internazionale, now at Monaco), Luciano Vietto (Atlético de Madrid), Samir Nasri (Antalyaspor). Players that participated actively in the squad, and Jovetic, in fact, became a pillar of Sampaoli’s team.

The team should be able to rebuild. Although, that is one of the virtues of Sevilla. How can you explain that this team, who sell important starters every summer, still maintains itself as a perennial European team? The answer, Monchi probably has, who is now in Roma. From here, we find the bigger problem. Can Sevilla keep up its performances and success without Monchi? It isn’t a minor doubt.

One coach leaves, another Argentine comes, and yet, another Argentine arrives: Éver Banega. The contribution he provides is enormous: we all know his abilities, and inside a team that he already knows, he can gift us his strongest aspect. From Serie A, another one arrives: Luis Muriel. A 9 of characteristics that Sevilla usually pursues, although with 26 years already, we expect his consecration in nothing less than the Sánchez Pizjuán. From Manchester City, 2 Spaniards who know La Liga well have arrived: Nolito and Jesús Navas. Signings that contribute into a bigger volume in attack. Both seem like good decisions in the club. And one of the most exciting transfers in Spain: Guido Pizarro. An Argentine midfielder that dazzled in Tigres has come to fight for a place in Sevilla’s midfield. It’s odd that the player has finally left for the Old World until 27 years, but don’t be deceived: the player is considered by Sampaoli and even played in Argentina’s past few games.

Taking this into account, there is a question that all the fans of their respective clubs will ask at the start of a new season: what are we fighting for? The responses differ. In Sevilla Fútbol Club, there is ambition, but also moderation. The team is not ready to become a champion (the distance with Real Madrid or FC Barcelona continues growing), but it should still chase third place. One eye on La Liga and the other on the UEFA Champions League. It is unacceptable that Sevilla still haven’t made it to the quarterfinals yet. The group they are in is rather easy (Liverpool, their main rival, although for their squad strength, I think they surpass them), Maribor and Spartak Moscow. This season, there are no excuses. They need a good league campaign, a great participation in international competitions. Berizzo not only knows the squad, but the competition (unlike his predecessor). It’s Eduardo Berizzo’s Sevilla, and we are all witnesses.