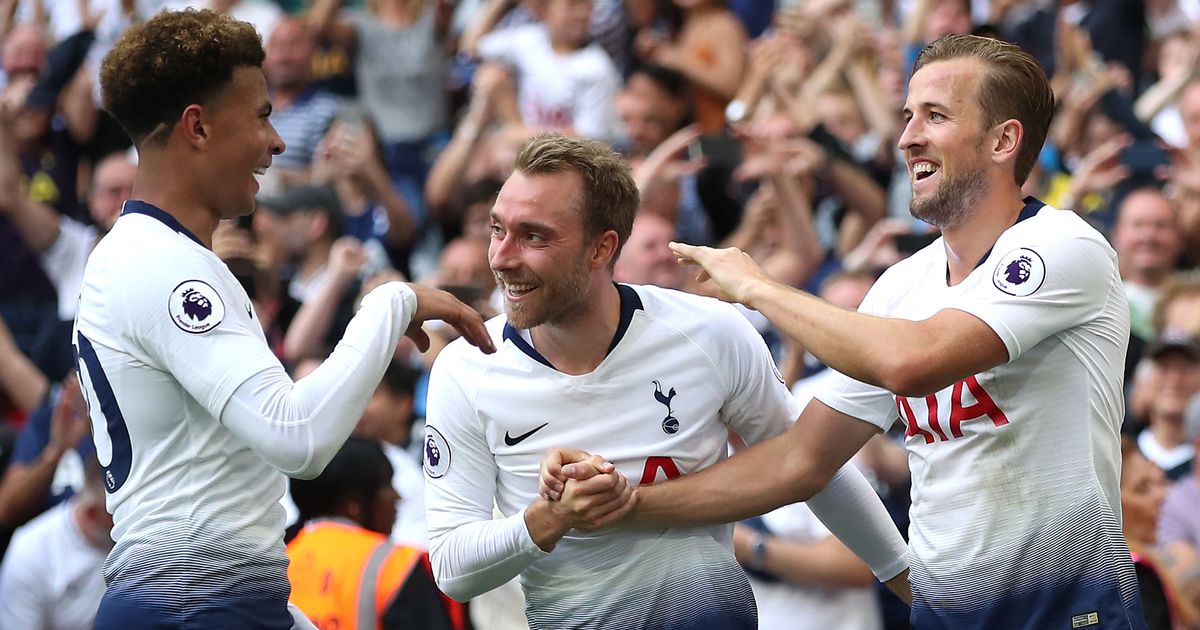 “Sometimes you need to be brave and take risks. I think the club is in a moment where they need to take risks.”

The dust settled on the 2017/2018 Premier League season after a performance against Leicester that was a real throwback to the Tottenham Hotspur we had seen under the guidance of Martin Jol and Harry Redknapp. A vastly entertaining match with sprinklings of comedic defensive errors and enthralling attacking prowess as Spurs wrapped up the season with a 4-3 victory over Leicester.

Mauricio Pochettino cut an unidentifiable figure throughout the twilight of the season with rumours rife of vultures in the shape of Florentino Perez and Roman Abramovic circling above the Argentine’s head. There was a fatigued feeling around the club. Harry Kane had picked up an injury away to Bournemouth and struggled to look like a fraction of his prolific self. The manager and his camp saw a dramatic decline in their relationships with Danny Rose and Toby Alderweireld. But the real sucker-punch came at the hands of Jose Mourinho and Manchester United at Wembley in the FA Cup semi-final. Following a 2-1 defeat to the Red Devils, a feeling of stomach-turning disappointment settled upon the fans, players, and most noticeably the manager, as Spurs found themselves licking their wounds as they departed from Wembley in the FA Cup yet again. Had this bright, exciting, youthful team missed the boat to celebrate glory together for the last time before one or two departed for pastures new?

In his final press conference of the 2017/18 campaign, Pochettino, weary and frustrated, threw the ball into the court of Daniel Levy to set the tone for the upcoming season. There was talk of being brave, hopes that Tottenham’s transfer activity would be all tied-up before a ball was even kicked at the World Cup in Russia. Optimism was rife.

The window started in thrilling fashion with Pochettino putting pen to paper and agreeing a new 5-year deal to stay at Tottenham Hotspur, whilst putting to bed any rumours of Real Madrid capitalising on any unrest in North London. Several news outlets began to spiel stories that a transfer kitty of £150 million being available to the man that committed his future to the club and wild rumours of Gareth Bale returning, along with Ajax’s young sensation Matthijs de Ligt  being lined up and Jack Grealish, one of the Championship’s brightest stars, set to join Kane, Dele and Eriksen at Spurs were flying around.

To add to the exhilaration, Daniel Levy tied down Harry Kane to a six-year deal, obliterating the wage structure that Tottenham have had in place since Daniel became chairman.

Are Spurs about to hit the big time?

After the departure of Cristiano Ronaldo and a superb performance from Gareth Bale in the Champions League Final, all hope that the Welshman could be returning to the club that gave him the stage to demonstrate his attributes appeared thinner and thinner. News also broke that de Ligt would be staying in Amsterdam and, whilst there were still murmurs of Tottenham sniffing around a few players, the only strong link remained with Jack Grealish.

As the deadline for the Summer Transfer Market grew close, Tottenham had been the only side in the division yet to sign a single player. Levy, as per usual, holding out for a bargain, wanted to put Aston Villa’s head over a barrel and take advantage of their financial crisis and take their starlet off their hands for a pittance. This proved a chaotic tactic from the hard-nosed businessman with the new owners at Aston Villa playing Levy at his own game and keeping hold of their home-grown ace man as the window slammed shut.

Tottenham Hotspur became the first ever club to complete a summer transfer window without bringing in a single player. There was outrage amongst the fans as the optimism of the early weeks of the transfer window seemed like an extremely distant memory. How could the manager not be backed after committing his future? After all the talk of ‘being brave’ was this really the window for Tottenham to stagnate?

Pochettino, as ever, towed the line. He spoke of believing in his current squad, that only a select few players in the game that could improve Tottenham’s squad were not available. This was rather difficult to accept as Spurs travelled to Newcastle on the opening day of the season with Serge Aurier and Moussa Sissoko in their starting XI and a crop of academy graduates on the bench. Tottenham won 2-1 despite a shaky performance, and could have well been beaten by a better side. This didn’t go far to ease the turbulence surrounding the club’s unsatisfactory transfer window.

To make matters worse, Tottenham’s long awaited, state-of-the-art, 62,000 capacity stadium, due to open on September 15th against Liverpool, was now delayed with no concrete opening day scheduled. Even though Spurs coped with Wembley well in the previous season, there is a reluctance to travel to Wembley every other weekend by the supporters for a number of reasons. A poor transfer window combined with delays to the stadium had become a nightmare beginning to the season.

Newcomers and big spenders Fulham left Wembley empty-handed as Pochettino and co. swept them aside with a somewhat stylish performance by Spurs. In the midst of a nightmare off of the pitch, things were looking good for the Lily-Whites on the pitch. Two back-to-back victories against tough opposition had been secured and the time spent on the training ground with January signing Lucas Moura was clear for everyone to see as the Brazilian looked sharp in the campaign’s first two fixtures. Up next, a trip to face an under pressure Jose Mourinho at Old Trafford.

Old Trafford has been a torrid place for Spurs, who have lost more games to Manchester United at Old Trafford than any other team has lost at an away ground in the Premier League. United went into the game on the back of a 3-2 defeat to Brighton. Mourinho, like Pochettino, was frustrated by his club’s lack of transfer activity. However, a stark difference being Mourinho let everybody know about it.

Spurs win 3-0 thanks to a delightful Harry Kane header and a brace from Man of the Match Lucas Moura. The crisis at Spurs has all but vanished.

There was plenty of criticism towards Spurs for the lack of transfer activity during the summer, and only time will tell if the club made a mistake or not. But there is absolutely no way that any club that has Mauricio Pochettino at the helm and working with his players on the training ground can go backwards. No players may have entered the camp, but the manager did what he does best – improve his squad by coaching them. By utilising what he has at his disposal and dedicating himself to making his footballers the best they possibly can be. It is a breath of fresh air to see a manager take pride in his ability to develop his players and believe in this strategy to one day be successful, than need a blank cheque and a bottomless pit of money to progress.

The ultimate goal and final monkey that both the club and Pochettino need to get off their back is a lack of silverware. A tricky draw in the Champions League containing Barcelona, PSV and pot 4 giants Inter Milan has left Tottenham’s hopes of bettering their 17/18 Champions League campaign hanging in the balance, but those famous Glory, Glory nights transform Tottenham into a unrelenting force. Pochettino got off to his strongest start to a Premier League season and that should have every Spurs fan relishing the 2018/19 season. Despite an underwhelming summer, everyone involved at the club has every right to be confident of a successful season.