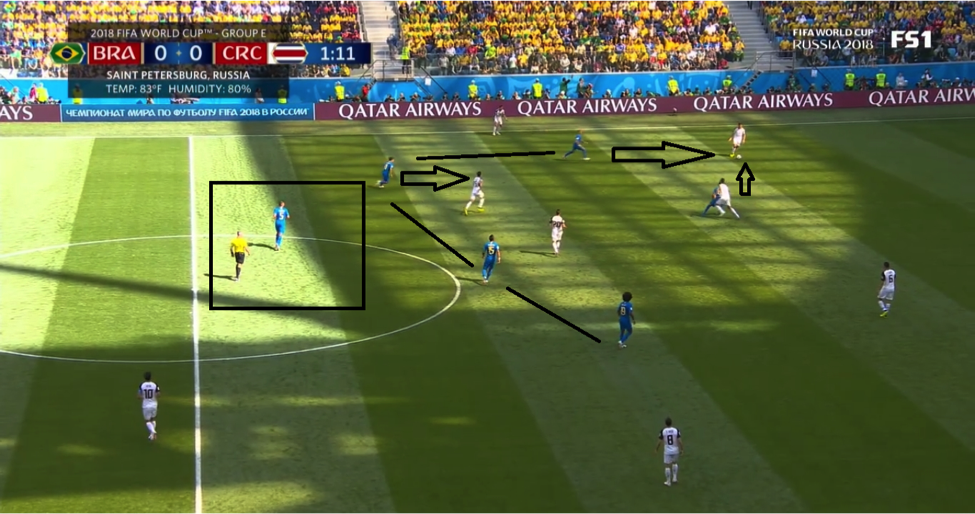 The English invented it, the Brazilians perfected it. This was always the thought until the latter stages of the 2014 World Cup. Following the Mineirazo, or Brazil’s “game of shame” against Germany in the semi final of the 2014 World Cup in Brazil, a dark cloud lingered over Brazilian football. Brazil then lost in the third-place match to the Netherlands and Felipe Scolari announced his resignation as manager after the result.

Ten days after losing 3-0 to the Dutch, Dunga returned to helm the Canarinho. His stint lasted for two years, as Brazil lost in the quarter-finals of Copa América 2015 on penalties to Paraguay, and consequently did not qualify for the Confederations Cup. The following summer, during Copa América Centenario, Dunga would see the end of his time in charge. Brazil were eliminated during the group stage and an overhaul was necessary. In came Adenor Leonardo Bacchi, or “Tite,” who made his name with Corinthians by winning the league title in Brazil’s first division twice, as well as the 2012 Copa Libertadores and the 2012 FIFA Club World Cup.

World Cup qualification for the rest of 2016 under Tite was a revelation. Brazil won six of six, scoring fifteen goals and only conceding one. In these fixtures, they used either the 4-3-3 or 4-1-4-1 formation. Brazil carried their momentum under Tite into 2017, where they did not lose a single game. Four wins and two draws meant they finished top in CONMEBOL by 10 points. They also had a goal difference of 30, scoring 41 and conceding 11.

Enter 2018, and the high expectations that come with being the most successful footballing nation in the world are at their peak. The Green and Yellow showed that they were ready for the World Cup by winning all four friendlies in 2018, scoring nine goals and conceding zero. Throughout Tite’s time in charge, he has stuck to a 4-3-3 or 4-1-4-1 formation to begin the game, but he still gives some creative freedom to his players. The structure of the team, transitional defending, attacking creativity, and organized pressing gives this team an overall stability while keeping the Joga Bonito flair that makes the game beautiful.

Brazil in the 2018 World Cup in Russia have finished top of Group E after tying Switzerland 1-1, and beating Costa Rica and Serbia by the scoreline of 2-0 in both games. The philosophy of defensive stability reigns true with Tite; through the group stage, Brazil have kept two clean sheets, made almost 17 tackles per game, 11 interceptions per game, and faced just 6 shots per game. The 17 tackles completed is out of 22 tackles attempted per game, which works out to a tackle success rate of about 77 percent, which ranks high amongst the 32 nations involved.

In terms of number of fouls committed, Brazil ranks 2nd-lowest out of the 32 teams at the World Cup. They commit 9.7 fouls per game, and only Japan at 8.5 per game, fouls less. When Brazil does not have the ball, which is not very often, they try to win it back quickly, and they do so effectively without fouling opponents. In the opening minutes of the game against Costa Rica, Brazil pressed high to cut off passing options, giving Costa Rica no choice but to have Keylor Navas play it long. Consequently, Casemiro was able to win the aerial duels following the clearance, and bring Brazil back into possession. In the image above, Gabriel Jesus has forced the center back to play across and Neymar reads the sign and steps up to press the ball and cut off the option of the fullback. Coutinho follows the pressure and takes away the holding midfielder, keeping the 4-1-4-1 shape in the midfield. Jesus directs the center back’s passing options and the midfield closes down the space. Casemiro is left free behind the four to clean up aerial balls and communicate positioning. Jesus also puts the keeper under pressure to prevent build-up from the back with his pace and ability to cover ground well.

After the breakthrough against Costa Rica late on in the game, Brazil still pressed the Ticos’ back-line with Firmino as the striker. After Firmino tips a pass from the center back towards midfield, Brazil picks it up on the halfway line and counters with a 4v3 advantage and makes two passes in the final third to seal the victory. The counter-attack took a total of 9 seconds, from gaining possession to putting the ball in the back of the net. When defending, Brazil hold true to the 4-1-4-1 formation that was implemented during qualifying. When in possession, they change to a 4-3-3; the wingers push higher up and the midfield two on either side of Casemiro occupy the half spaces. This has been Philippe Coutinho and Paulinho recently on the left and right sides respectively. Neymar will push high up on the left with Willian or Douglas Costa high on the right. Jesus will stay on the center backs to leave freedom for the center midfielders and wingers to come across between the midfield and defensive lines of the opponent. The fullbacks get involved with overlaps and cut inside when space opens up. Casemiro, Thiago Silva, and Miranda are the disciplined and experienced spine of the team that allows the creative players to interchange and exploit space as well as take on 1v1s. During the Serbia game, Tite altered his formation with a sub in the 66th minute of play. He took out Paulinho, the goal scorer in the first half, for Fernandinho. This was a tactical change that was identified just minutes prior to the sub. Paulinho was getting pulled out of the line of four, and left gaps where Casemiro had to mark two Serbian players. Fernandinho came in, and a 4-2-3-1 was implemented to shore up space in front of the defensive line. Fernandinho also broke up attacks more effectively at the later stages of the game, while staying connected to Casemiro. For the rest of the game, Serbia was unable to find as much space between the defense and midfield lines of Brazil. Early in the Costa Rica game, Fagner pinches infield to receive a pass from Thiago Silva, allowing allows Paulinho to drift more centrally. Fagner is now in the half space on the right side of the field, and Willian is wide to pull the fullback and create a 1v1. The central midfielder for Costa Rica steps to Fagner and leaves the hole for Paulinho. This space is also there because Jesus is occupying the center back on the edge of the box. This scenario is one example of the freedom in attack that moves opposing defenses and creates opportunities. In the game against Serbia, Paulinho is able to find space in behind because of Gabriel Jesus. Jesus is occupying the left center back, who follows Jesus when going across the defense. The left fullback does not come across in time, as he is focusing on Willian. Willian keeps his position wide right to have the fullback make a choice of where to be positionally. This gap is exploited by Paulinho, and Coutinho has the vision and passing ability to make the play. Brazil’s positional build-up play happens with mostly short passes to move defenders and create numerical superiorities. When the field is cut into fifths to have wide, half, and middle spaces on the pitch, you can see that passing options are always there to keep possession and shift the ball. Casemiro is the pivot, and the center backs are comfortable enough on the ball to worry opposing defenses, who must stay cautious in case Silva or Miranda play an accurate through ball into the box. Neymar, out of the picture, along with Marcelo, stays wide give to keep the shape and have space.

Brazil in the group stage attacked mainly down the left side of the pitch. They attack down the left 44 percent of the time, while they use the right side and middle of the pitch 28 and 27 percent, respectively. This is down to the talented playmakers on the left that include Neymar, Coutinho, and Marcelo. These three, along with almost every player on roster for Brazil, relish 1v1 opportunities, and the statistics prove that. Brazil have attempted the most dribbles per game, 25, in the World Cup, and have the most successful dribbles per game with 17. Additionally, they have a dribble success rate of 68 percent. The position and pass maps below show Brazil’s shape against Costa Rica and Serbia, as well as who was on the ball the most. Brazil will have no easy contest against Mexico tomorrow. If Mexico sits deep in a low block, Brazil will be able to have plenty of possession, but will need to get clean shots and be wary of the counter. Still, Brazil are ready for the challenge, as they go against the team that defeated the defending world champions. This Brazil side under Tite has all the potential to go all the way in the World Cup and restore Brazilian football to its rightful place.