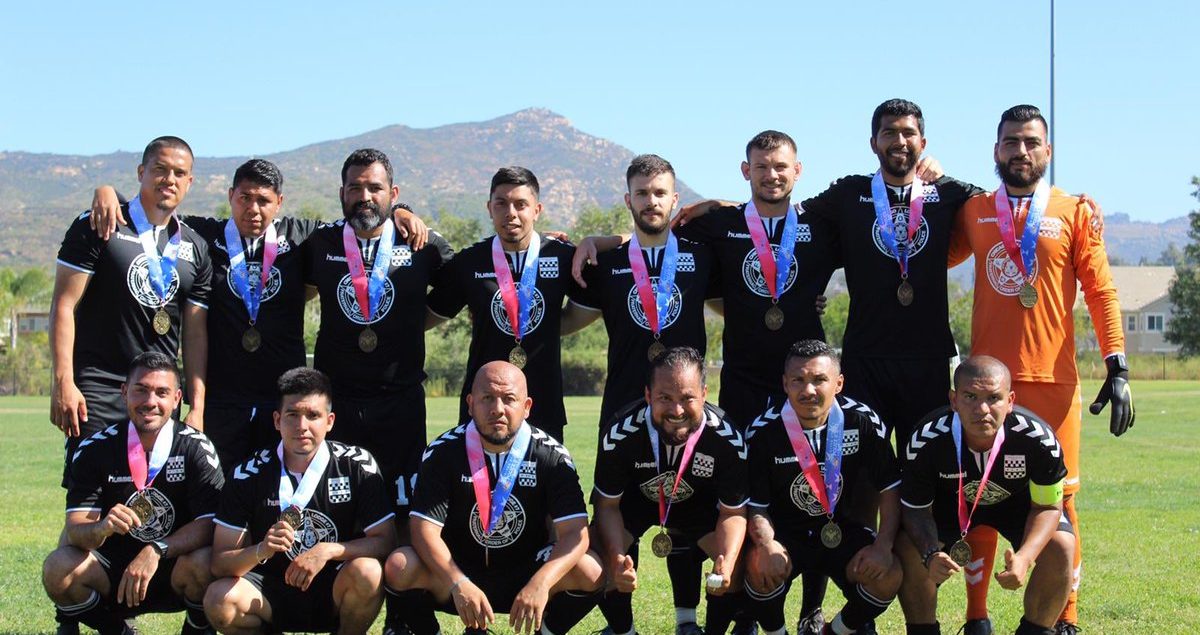 For as long as football has existed, clubs have formed around professions, careers, and ideals. Churches, armies, factories, and schools have all provided the core of the original waves of club football, providing most of the talent along the way. Yet another profession interlocked with the beautiful game from its early days is that of the police and other forms of local law enforcement.

While the era of company or profession-based clubs has largely calmed due to the modern expectations of career footballers as elite athletes, dedicated singularly to the game, the roots of this tradition are very much alive in the world.

One such source of law enforcement-based clubs can be found in a country where the politics around the police have become a constant headline; the United States of America. While no professional clubs in the US are police-based, there are several major amateur organizations across the nation that are directly rooted in the local police force.

Founded in 2005, the Chicago Police Soccer Club (CPSC) is an amateur club comprised solely of Chicago Police officers, though the club welcomes other law enforcement officers from around the state of Illinois who are interested. Club captain Gino Pacetti explained that, “Besides loving the game, the only requirement to be a part of CPSC is to be an active duty law enforcement officer.”

The club played its first match the October of 2005 against a club of similar design attached to the Chicago Fire Department. CSPC won their debut 1-0.

CPSC doesn’t play in a designated league due to the complexity of its players’ work schedules, though this doesn’t stop them from getting plenty of time on the pitch, “With team members working so many different schedules and games/tournaments being played on each team member’s own personal time (not Chicago Police Department time), it is hard to commit to leagues that last months,” Pacetti noted. “The club usually tries to compete in 2-3 travel tournaments yearly while also competing in local friendlies and tournaments.”

The Unsung Heroes Soccer Tournament is a center piece of CPSC’s schedule, both for the minutes it provides its players and the aid it sends toward fellow first responders and law enforcement.

“The Unsung Heroes Soccer Tournament is a yearly tournament organized by Unsung Heroes Inc., which is based in Missouri. This organization provides support to those in the public safety profession that have been injured or killed,” Pacetti explained. “The tournament is open to first responders such as police, fire, corrections, and paramedics and is hosted in a different city yearly… the tournament raises funds for the host city’s first responder not-for-profit organization of choice.”

Pacetti went on to explain that CSPC has positive and simple goals on and off the pitch, “A positive result on the pitch is always great, but the main goals of CPSC are to promote camaraderie among first responders, promote positive community interactions, support first responder causes/charities and keep an active and healthy lifestyle.”

The call for positive community interactions is a key one for police officers and departments, especially at a time when the social and political perceptions of law enforcement rollercoasters between different political ideologies, races, economic statuses, and religions.

With the politics of law enforcement, and its real life repercussions, becoming more and more a center of American life, in a country where football has become deeply interlocked with left-leaning politics that often find themselves in opposition of law enforcement preferences and practices, many questions arise as to how the police officers can coexist in the soccer world with their fellow Americans.

Pacetti addressed how CPSC goes about creating positive community experiences before going into the complications that sometimes arise.

“The club participates in youth soccer camps, community events, and gives back to the community. Last year, the club was asked to participate in the Juvenile Intervention and Support Center soccer homework camp at the Chicago Police Education and Training Division,” Pacetti explained. “CPSC has [also] recently accepted an invitation to compete in two community games against members of the Scottsdale community – one against local teens and one against adults. The club is also finalizing plans to play a friendly against a Chicago Public Schools varsity high school team.”

The challenges that face CPSC during these events, however, are reflected in some early roadblocks that emerged during an event that involved players practicing various football stations and drills with young camp goers at Gage Park.

“While at the community day, the club wore their game uniforms which have police related logos, but no official Chicago Police markings. When some of the campers found out that they were going to be running through drills with police officers, they became somewhat reserved and began asking questions about why police officers were there.”

Pacetti did note that once the camp got rolling, tentions did ease. “When club members explained that they were there to help and teach soccer drills, the campers began to come around; by the end of the day, the campers were jumping into photos with the team and hi-fiving and hugging CPSC team members.”

The tensions explained above can be easily traced to the growing conversation surrounding police and police violence. High profile investigations into deaths and injuries related to violent action, justified or otherwise, by law enforcement officers, have become a central discussion in the modern political realm.

The Chicago Tribune reported in 2016 that, “Every five days, on average, a Chicago police officer fired a gun at someone. In 435 shootings over a recent six-year span, officers killed 92 people and wounded 170 others.”

These numbers do not reveal how many of these shootings or deaths were deemed necessary or unnecessary, though they do represent one of the big topics that divide citizens and officers. It should be noted the same report reflected a steady decline in shootings from 2011 to 2015, with a drop from 100 in the first year to 44 in the last.

The death of Laquan McDonald, one which divided many in and outside of Chicago following a series of twists and turns while under investigation, provides a reminder that the complex relationships between officers and citizens is indeed bigger than the cities and towns where they live. The topic itself is instead an all too real part of the American conversation.

With the accountability of these encounters and the well-being of the many officers who leave a positive mark on their communities both on the minds of many in law enforcement, continued progress in outreach is often a strong light at the end of the tunnel.

CPSC is not alone in navigating this complex environment of community and football. The New York Police Department Finest Soccer Team (NYPD FC) are a fundamental presence in the New York football ecosystem, playing in the amateur Cosmopolitan Soccer League alongside the likes of Lansdowne Yonkers , New York Greek American, and New York Ukrainians, the last two of which are historic sides from the United States’ over one hundred years of amateur soccer.

Founded in 1988 by the late Detective Rudy Blake, a Costa Rican immigrant to the US whose passion for the game was only matched by that for his work, the club consists of roughly 70 members. These members include various ranks, ages, and titles, but almost all are some form of police officer. Club manager Ronald Mejia noted that, “The majority of the players are of Law Enforcement background however we do have a few players that are not in law enforcement.”

As is true for many police-centered clubs, NYPDFC is not in itself a part of the police department and is a separate entity. “Although we represent the NYPD at soccer tournaments, charity events, etc,” Mejia explains. “We do not receive any sponsorship or compensation from the NYPD for our uniforms, equipment, time or travel.”

Off the pitch, the club’s main focuses revolve around spreading access to football gear, both in and outside of New York. Mejia stated that, “Our main passion besides doing well as a team in the league is traveling to underdeveloped countries and visiting poor neighborhoods and distributing soccer equipment to those less fortunate.”

With the club often traveling to compete in different tournaments, the mission to spread access to the game has become an international one. “We are fortunate enough to be able to obtain slightly used soccer gear from the NY Red Bulls as well as local youth soccer clubs. We in turn donate them in the countries we visit,” Mejia continued. “We have traveled at our own expense to Canada, across the U.S., Colombia, Grenada, Ecuador, Peru, Trinidad and Tobago, South Korea, Haiti, Jamaica, Dominican Republic and Costa Rica. We have distributed soccer equipment to over 12,000 children in these countries since we began our venture of good will.”

When asked about where the club finds itself politically, Mejia keeps it simple. “We don’t involve politics in any of our missions, games or fundraising. Our work is with kids that are in need.”

The political lines surrounding police may not come into play from the perspectives of these clubs, but as Gino Pacetti explained earlier, the issue is unavoidable when interacting with the community. With that said, many are attempting to improve that situation by using football clubs as a platform for positive events and conversations.

Whether or not these clubs will solve or massively improve the situation is not something any article can predict, but the facts show that people on both side of the issue are trying.

Multiple attempts were made in the process of writing this article to contact the Chicago and Greater New York Area chapters of Black Lives Matter in order to discuss their view of the efforts of Chicago Police Soccer Club and New York Police Department Finest Soccer Team. No response was received from either over the course of a month.