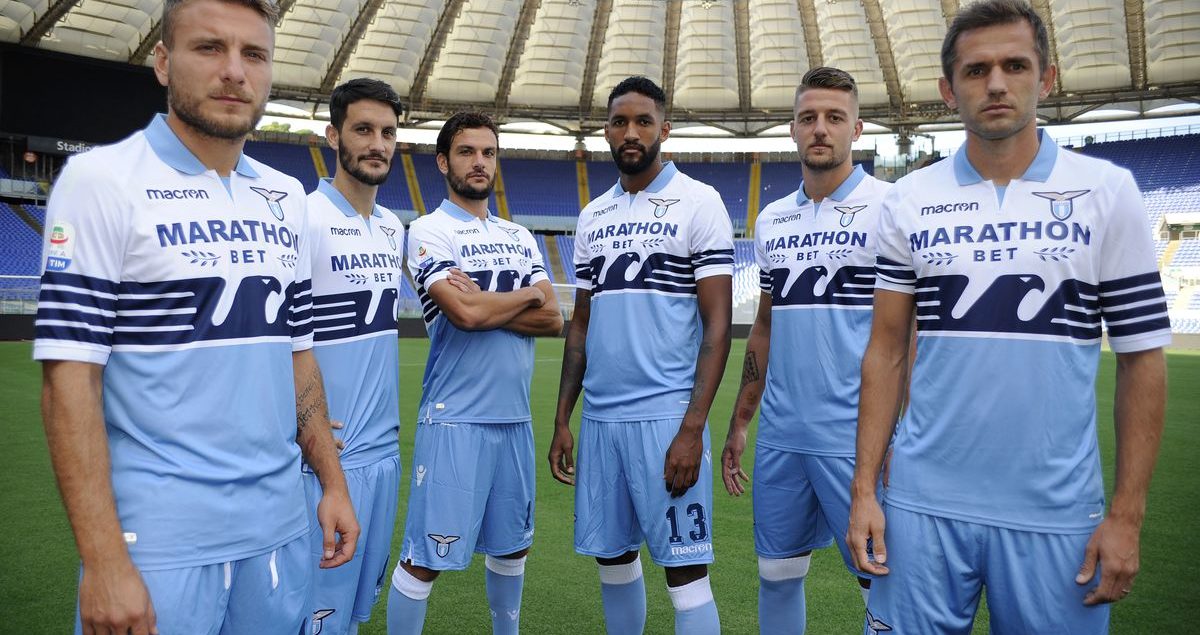 Near the conclusion of the January Transfer Window, David Amoyal – Editor of Gianluca Di Marzio’s English Website – asked: “As it stands, in which department would Lazio be best in reinforcing?”. A question that took some time to answer, after reviewing Simone Inzaghi’s squad, four alternatives became visible. In priority, these choices are to bolster the squad by signing a left wing-back, a left-footed central defender, a central midfielder, and an additional striker or trequartista. However, it is important to note that if Lazio secures UEFA Champions League football for next season, every one of these positions must be reinforced.

Senad Lulic, who joined Lazio in 2011, has made over 350 appearances thus far for the Biancocelesti. A true fan favorite amongst Laziali – after scoring the game-winning goal in the 2013 edition of the Coppa Italia – the Bosnian originally fluctuated between playing as a central midfielder, left midfielder, and left-back in his first few seasons in Rome.

However, since the 2017/18 season, he has been primarily deployed as a left wing-back under Simone Inzaghi; fast forward to 2020, despite being 34 years of age and into the final six months of his contract, he continues to start and be the preferred option down the left flank of the Italian manager’s 3-5-2 formation.

This may come as a surprise to fans who do not follow the club as closely, primarily for two reasons. The first reason is due to the player’s performances, which started to decline last season. Lulic’s grit, desire, and experience have never been in question, but his age is starting to show – running up and down the flank is not an easy job match in, match out. The second reason is due to the lack of competition Lulic has.

The club has made multiple investments for the department – including the likes of Ricardo Kishna, Jordan Lukaku, Riza Durmisi, and most recently Jony – but they all seem to have backfired to date. They have all failed to impress and perform when given the opportunity, essentially giving Inzaghi no other alternative but to start Lulic. However, this is set to change due to recent events. The captain sustained an ankle injury which forced him to undergo surgery this past week.

Sidelined indefinitely, Inzaghi is set to make summer signing Jony the interim starter, but how long will he last is the question; although the 28-year-old Spaniard has made 20 appearances for Lazio this year, he has made just three starts in the Serie A this year against Inter, Sampdoria, and Parma respectively.

32-year-old Francesco Acerbi is the only proven and established starting central defender at Lazio. Additionally, he is also only one of two left-footed defenders the club has; the other being Stefan Radu, who turns 34 next year. Signed in 2018 from Sassuolo for a fee of approximately €10 million – to replace the then-recently departed Stefan de Vrij – the majority of calcio fans’ opinions were initially divided on the transfer.

This was because Claudio Lotito and the club had continually stated their ambitions of making the UEFA Champions League and to do this, they needed to improve the side that they had over the 2017/18 season.

If de Vrij had remained at the club, Acerbi would have been a proper addition to use alongside him, but this was not the case – Francesco was brought in as a direct replacement for the Dutchman. This raised a few question marks, especially seeing that the transfer window concluded with the club failing to sign another central defender.

However, it is crazy to see what impact the Italian has had for the Biancocelesti. Opinions surrounding him quickly changed; he has shown grit, desire, passion, strength, and concentration in his time at the Stadio Olimpico, proving to be one of the best defenders in the Serie A. Roberto Mancini recalling him to the Italy National team on numerous occasions emphasizes this even more.

Throughout the past two years on The CalcioLand Podcast, David Amoyal has questioned Lazio’s backline, trying to figure out who Lazio’s starting three defenders are. While Acerbi is the obvious first choice, the other two positions have been shuffled around on numerous occasions.

This is why if Acerbi sustains an injury, Inzaghi’s side seems that much weaker. The Biancocelesti’s current defensive department consists of Acerbi, Radu, Luiz Felipe, Bastos, Patric, and Denis Vavro. Although Luiz Felipe, Bastos, and Patric have shown positive displays when called upon thus far this season, in recent years, they have been unreliable match in, match out.

In addition, new summer signing Vavro – whose transfer was hyped up tremendously – looks to be taking a long time to adapt to the playing style in Italy. He has made just 10 appearances for Lazio this season in all competitions; only four appearances have come domestically in the league, where he is yet to start.

Lazio’s midfield trio is composed by Lucas Leiva, Luis Alberto, and Sergej Milinkovic-Savic. Three different types of players, they are critical to the success the Biancocelesti have experienced in recent years.

They each complement each other, dominate and outplay their opposition in the center of the park, and play a massive role in the build-up play and defensive capabilities that Inzaghi’s tactics need; they set up counter-attacks by breaking quickly while also providing a blanket of protection to the back three.

Lucas Leiva is a ball-winning defensive and holding midfielder who tends to stay centrally while directly in front of the defensive line. Signed in 2017 from Liverpool, after spending a decade at Anfield, the Brazilian’s acquisition can be deemed as one of Igli Tare’s most underrated signings.

This is simply because no one saw the transfer coming; looking to reinforce the midfield after Lucas Biglia’s transfer to Milan, many thought that the club would have signed a big name to excite them after securing a decent amount for the Argentine. Instead, they spent just €5 million to secure Lucas Leiva, who was difficult to have an opinion on considering his lack of playtime in recent years.

What seemed a risk, his transfer is a part of the many positive outcomes of the Albanian Sporting Director’s excellent track record. However, now 33 years of age, his performances are beginning to drop off. With a contract expiring in 2022, it would not come as a surprise to see the Brazilian being replaced in the near future. This could be by homegrown product Danilo Cataldi or an outside signing, as Lucas Leiva leaves the Capital to end his career where it all started, back in his home country.

Luis Alberto, known as Il Mago, is a technical and creative attacking midfielder who plays on the left side of the pitch. Signed in 2016 by Lazio, a year before fellow Liverpool teammate Lucas Leiva, the Spaniard had yet to reach his full potential. He was acquired from Sevilla in 2013 by the Reds but failed to break into the first team, constantly being sent out on loan to La Liga.

This is why when Tare scouted him and brought him to Rome, no calcio fan in a million years would have believed that he would grow to become one of the best midfielders in the world.

However, he exceeded expectations following his first year at the Stadio Olimpico – by working hard in training to earn Inzaghi’s trust – and has not looked back since, cementing his place in the starting eleven. This has resulted in Marco Parolo, the experienced former Italy international and current Lazio veteran, to be displaced to the bench. But at 35 years of age and with a contract that expires on 30.06.2020, his time as a substitute and in the Biancocelesti colors looks set to come to an end.

Sergej Milinkovic-Savic, known as Il Sergente, is a box-to-box aerial threat and physically dominant central midfielder who plays on the right side of the pitch.

Turning 25 this year, the Serbian was signed from KRC Genk in 2015 at the age of 20. Investing for the future, not even Tare himself can believe that the player has become one of the most valuable assets in football over the past five years with the Biancocelesti. The target man for Lazio – when both moving out of their half and off any set-piece – this is because of his stature, standing at 1.91 meters, and not afraid to challenge for any 50/50; when Milinkovic-Savic is absent, that aggression is missed in the side, and the opposition usually takes advantage.

Overall, if Luis Alberto or Milinkovic-Savic were to leave the club, it is without a doubt that they would receive a hefty amount. However, Inzaghi’s tactics would fail without bringing in similar players to replace the two, which is definitely a difficult task to accomplish.

Ciro Immobile and Joaquin Correa are currently the first choices in Simone Inzaghi’s mind to lead the lines at Lazio when fit. Although the Italian is said to utilize a 3-5-2 formation, it is more of a 3-5-1-1 formation, with the Italian playing as the sole center forward and the Argentine playing behind him as a trequartista.

However, on multiple occasions throughout the match, they swap positions to either confuse defenders marking them or to simply collect the ball and give the other player a chance to break forward. Complementing the manager’s counter-attacking style of play perfectly, this is mainly the outcome of the 29-year-old’s constant movement and the 25-year-old’s quick feet, which allow them to expose opposition with ease.

It is without a doubt that Immobile has been the bargain of a lifetime for Lazio. The player was signed in 2016 for a fee under €10 million and has since carried the team to success with consistent performances in front of the opposition’s goal.

While constantly being under fire for his lack of production for Gli Azzurri, he has scored 114 goals in 164 matches to date for the Biancocelesti and has played in nearly every scheduled match that the club has had. Breaking records left, right, and center, it is impossible to imagine what position the club would be in right now if they did not take a chance in signing the striker.

Signed in 2017 as a substitute for the attacking department, many were quick to jump to conclusions about Felipe Caicedo during his first season in Rome; he looked uncomfortable and lost on the pitch and managed to miss the easiest of chances. However, since then, the Ecuadorian has proven himself as somewhat of a super-sub. In 69 Serie A matches, the striker has 19 goals and six assists, most of these converted after coming off the bench.

A different type of attacker than Immobile, the 31-year-old plays best when deployed as a second striker or when deployed alongside a center forward with a good work ethic. This is because he is what is known as a target man, holding up play to allow his teammates to breakdown the opposition’s midfield and defense; he rarely chases the ball or makes sprints into open space. It is without a doubt that filling in for Immobile is quite a difficult feat.

However, when a player struggles to make an impact when playing for more than 60 minutes in a match, one can see how lining up with just Caicedo in support of attack seems like a concern; the player is substituted around the 60 to 65-minute interval almost every time he starts unless Ciro Immobile or Joaquin Correa are injured, in which Inzaghi counts on him to last the full 90 minutes.

Looking at every other top club in the league, they have plenty of options in attack to prepare for any injury or event that may transpire; Lazio has just one with experience, with the other two being recently added youngsters Bobby Adekanye and André Anderson. Although they have promise, they have failed to show what they can truly do and have not accumulated many minutes for the club.