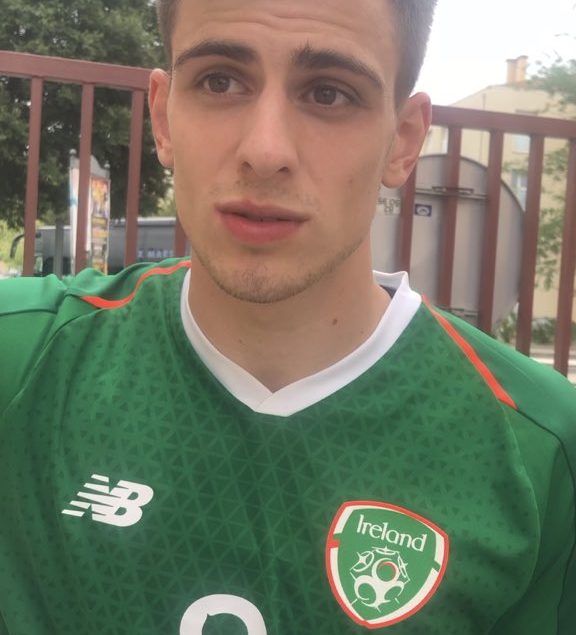 As Ireland approach the semifinals of the Toulon Tournament, Zach Lowy spoke to the Ireland captain Jayson Molumby.

ZL: I noticed a lot of interceptions from you, breaking up a lot of Bahrain attacks. What would you say is your strongest skill in midfield?

JM: I think probably my work rate. I work hard for the team, and I think that’s why I’m in the team. To work hard, to try to win the ball back, and set when we’re going forward, and try to feed the attacking players, and hopefully it works, it has worked today. It was a tough game, but we’re absolutely delighted to get it over the line. Onto the semifinals now.

ZL: How does it feel to be competing against such an international, diverse set of competition?

JM: It’s brilliant. This is my first experience playing any country outside of Europe. We’ve played only European countries coming up through the -17s, -19s, -21s, and so far we’ve played Mexico and China who we’ve never experienced anything like it. It’s a different style of play and we’re delighted that we could just get the win.

ZL: Was it your first experience playing outside of England or Ireland?

JM: No, not my first experience playing outside; it was different, but we coped well. I’m tired of the heat, we’re not used to this heat, the heat over here is different level, but we coped well with that at the end of the day. Whether we win 3-0, 2-0, 1-0, we’re happy.

ZL: You didn’t get to play for Brighton’s first team last season, but what are some things you learned this past season that helped your development?

JM: Obviously, being injured, I learned a lot about myself, about football, that football can be a ruthless game. I think that’s made me stronger mentally, and to come back and be straight into the Ireland set-up is just unbelievable. I couldn’t be happier with my return to football.

ZL: Did you ever think that, as soon as now, coming back from injury, that you’d be able to compete against such a diverse set of teams?

JM: Probably not. I think three games and three 90-minutes in six days is hard, especially in this heat. A lot of demand in my body, I haven’t experienced anything like this since coming back, and I’m only back for 3-4 months, so touch wood, that’s it, and I can continue to play freely and injury-free, fingers crossed.

ZL: Do you think there’s anything, besides your mental strength, that you’ve improved on since the injury?

JM: I think you learn a lot from watching other players play, where you just sit back and learn about football. I think my attacking play has gotten better, just switching or trying to play balls over the top. Looking forward more is probably my most improved attribute.

ZL: As a goal, are you looking into Graham Potter’s Brighton team this season?

JM: We’ll see what happens. I’m 20 in August, so I’m pushing on, I need to get first-team games under my belt, so whether that’s at Brighton or somewhere else, we’ll have to see, but I’m just looking forward to getting first-team games.

ZL: Hypothetically, would you be open to a move outside of England or Ireland?

ZL: What’s the biggest takeaway that you’ve had from playing against nations such as China, Bahrain, and Mexico?

JM: There’s just one pace for the entire thing, and that’s so fast. To continue to play at such an intensity for 90 minutes, it’s extremely hard, for us especially. They’re used to this heat, they’re used to playing in this heat, so playing 3 games in 6 days has been pretty hard on the body, but that’s probably the main thing–the intensity which they play at.