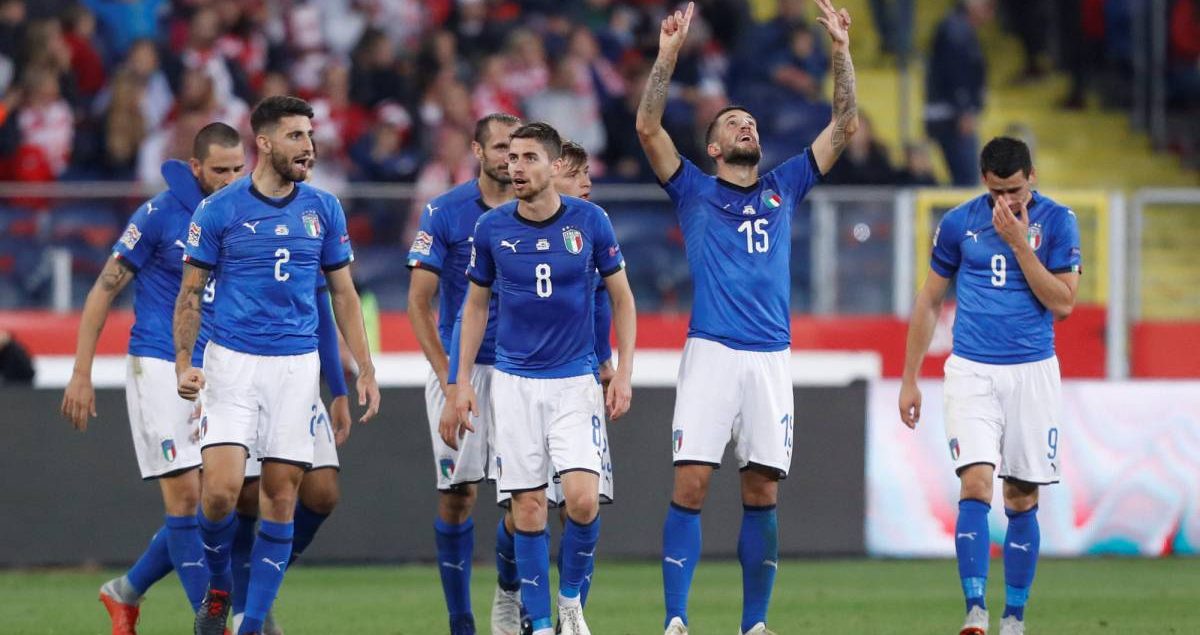 After some early struggles under new coach Roberto Mancini, Italy seems to have developed a new football identity during the latest international break.

The Azzurri drew 1-1 against Ukraine in Genoa in a friendly last Wednesday, and on Sunday, defeated Poland 1-0 away in Chorzow in their UEFA Nations League A Group C encounter. 11 months after a dull and soulless Italy team fell to Sweden in World Cup Qualifiers, Mancini’s men showed signs of life in the creativity department, playing attractive football in both games and showing a clear style of play that had been missing for years.

Since Mancini became the Italian national team coach in May, he has tried and tested many players, but the philosophy of the team was unclear until the games against the Ukrainians and Poles.

The scores from the matches against Ukraine and Poland do not tell the full story. When people looked at such scorelines in the past, they would assume that the Azzurri allowed the opposition to play, and would hit on the break when they felt it was necessary. This time, the Italians played with great confidence, fluidity, and attacking flair, and they were unlucky not score more goals than they did.

Back in September during the previous international break, Italy drew 1-1 at home with Poland and lost 1-0 away to Portugal, leaving the Italians with just one point from their opening two Nations League fixtures.

Mancini used the 4-3-3 formation against the Poles in Bologna with holding midfielder Jorginho starting in the regista role, and with defensive midfielder Roberto Gagliardini and box-to-box midfielder Lorenzo Pellegrini acting as interiors.

The Azzurri struggled enormously to control the play and the Italy coach had to put Giacomo Bonaventura on in the second half for Pellegrini. Although the Italians played slightly better with the AC Milan midfielder on the pitch, they applied more pressure when Lorenzo Insigne was replaced by Federico Chiesa, who eventually won the penalty which Jorginho converted.

If Italy started badly against Poland in the first Nations League game, the performance was worse against Portugal due to nine changes to the first XI and a lack of clarity in the formation. Some media outlets reported it as a 4-3-3, some a 4-4-2, and others even a 4-2-4. If Mancini wanted to create a tactically flexible side, he failed miserably, as the Azzurri players were confused and lacking in desire.

After the failed tactical experiments in the first two Nations League games, he decided to inject more creativity into the midfield. Jorginho kept his place as the deep-lying playmaker, but this time, he had Marco Verratti from Paris Saint-Germain and Nicolò Barella from Cagliari supporting him.

Verratti returned from the adductor injury that kept him out of September’s international break, while Barella finally earned the trust of Mancini despite his tender age of 21. Fielding those three together in the middle of the park meant that the Azzurri played with greater fluency. Instead of having two defensive midfielders beside him, Jorginho had two other technically gifted midfielders flanking him, and it had improved Italy’s attacking play significantly.

Instead of waiting for the opposition to make a move, Mancini had an Azzurri side that was willing to take the initiative. Alessandro Florenzi and Cristiano Biraghi were constantly advancing from the full-back positions, while the midfield trio passed the ball with consummate ease, and the attacking trident offered great movement as well as the confidence to dribble and shoot whenever possible.

It took until 10 minutes into the second half for Italy to score, when Ukrainian goalkeeper Andriy Pyatov failed to hold a left-foot strike by Federico Bernardeschi. Despite earning a much-deserved lead, the Azzurri held onto it for just seven minutes as Ruslan Malinovskyi equalised with a bouncing left-foot shot.

According to La Gazzetta dello Sport, Italy had 65.7 per cent possession compared to Ukraine’s 34.3, and they had 16 shots to nine. The friendly might have ended all square, but the Azzurri were superior in many aspects, and Mancini was so impressed with the performance that he kept the same starting line-up for the match against Poland.

Mancini’s side once again controlled the play, and this prompted Polish coach Jerzy Brzęczek to make two substitutions at half-time, as well as switch from the 4-3-1-2 formation to the 4-4-2. These changes made little difference to the Biało–Czerwoni, as the Italians were still the more dangerous side in the second half, and could depend on goalkeeper Gianluigi Donnarumma to make some crucial saves.

It took an unlikely source for the Azzurri to find the winner. After Insigne took a corner from the right, substitute Kevin Lasagna flicked the ball with his head, and Biraghi slid in at the far post to put it in the back of the net.

Despite the narrow 1-0 scoreline, the statistics from Who Scored illustrate the dominance of the Italians. Italy had 18 shots to Poland’s six, 69.3 per cent possession, and a pass success rate of 87 per cent to Poland’s 70.

Based on the performances against Ukraine and Poland, all that Italy is missing in its starting XI is a prolific finisher who can convert more of their scoring opportunities. Mancini started with Bernardeschi, Insigne, and Chiesa in both games, but they could not convert enough chances.

It must also be said that Pyatov had a fantastic game in goal for the Ukrainians, excluding his error which resulted in the Bernardeschi goal, while Wojciech Szczęsny also prevented the Polish national team from losing more than 1-0.

The concept of the false 9 in the Azzurri squad was inspired by the Napoli side coached by Maurizio Sarri from 2015 until 2018, where Dries Mertens operated in that role. Insigne had to replicate what his Partenopei teammate did at club level but there was not enough end product from the diminutive Neapolitan forward when wearing the savoy blue of Italy.

Unfortunately for Mancini, he has a dearth of quality centre-forwards in his squad. Simone Zaza from Torino and Patrick Cutrone from AC Milan had to pull out due to injury, Zaza’s club teammate Andrea Belotti is out of form, the enigmatic Mario Balotelli is lacking in form and fitness, and Lazio forward Ciro Immobile was in the squad, but he has been disappointing for the national team.

Udinese striker Lasagna earned his maiden call-up despite scoring just one goal in eight Serie A games so far in 2018/19, but he provided the assist for Biraghi. Perhaps he could add another dimension to Italy’s play and serve a tactical role in the side if other centre-forwards cannot score prolifically.

The last 12 months have been dark times for Italian football, especially for the national team, but the performances from the Azzurri in the last two matches indicate that there might be a bright future ahead. If these displays are anything to go by, Mancini has the opportunity to build the foundations for another competitive Italy team.