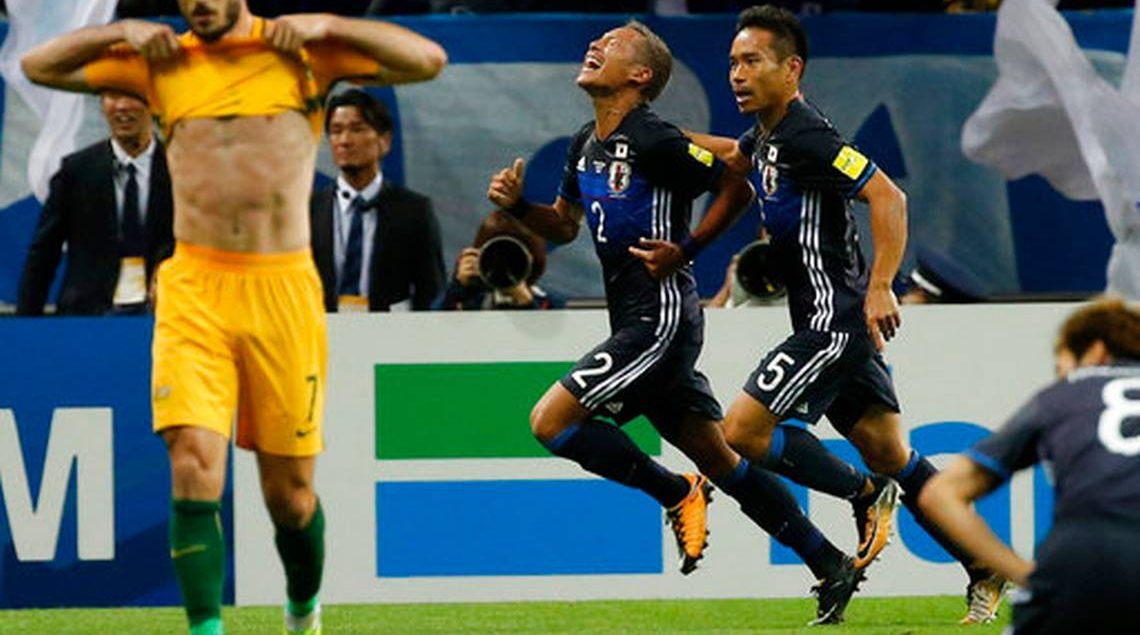 Japan booked their place to a sixth straight World Cup as Samurai Blue defeated Australia 2-0, a victory that guaranteed them the top spot in Group B of Asia’s qualifying campaign for Russia 2018.

“This is for all of Japan,” said manager Vahid Halilhodzic, who took over from Javier Aguirre to finish the job just before the start of the qualifying campaign.

The Japanese side sealed automatic qualification following a rational performance for which the Bosnian coach should get the credit.

From the opening minutes, the Samurai Blue defence looked comfortable.

The back line of Hiroki Sakai, Mya Yoshida, Gen Shoji, and Yuto Nagatomo was rarely put under pressure by the Socceroos.

Most of Australia dominated first-half possession (58%-42%) was in their territory. “We had possession, but not real effective possession,” Postecoglou admitted after the game.

When Socceroos was able to move the ball into Japan final third they struggled to link the team with Robbie Kruse, who lacked support up front.

On their side, Halilhodzic’s men looked more organized on their defensive effort and they was also able to press high up the pitch in the first part of the game as the four corners won in the first 16 minutes testified.

Furthermore, the second half was even more defensively dominated by Samurai Blue that denied Australia penetration. Japan closed the space very well.

Huge credit to Halilhodzic who left big names Keisuke Honda, Shinji Kagawa, Shinji Okasaki and Genki Haraguchi on the bench to build a defensive oriented side that left Australia good spells of possession but blocked them from create any clear scoring chances.

Japanese fans handed a surprise ahead of kickoff when the speaker let them know that those players was ruled out on the sideline by the Bosnian.

It wa a risky strategy by Halilhodzic but it paid off for Japan. Takuma Asano, Yuya Osako and Takashi Inui, the Samurai Blue’s manager lined up an offensive unit very mobile but also energetic enough to press high up and district Australia’s build up. Centre-backs Mark Milligan, Trent Sainsbury and Matt Spiranovic lost composure and made some costly mistakes.

With Hiroki Sakai (right) and Yosuke Ideguchi (left) coming from behind, Samurai Blue showed mobility and unpredictability up front. They also made a good use of switched attacks as they did in the 41st minute when Nagatomo Nagatomo cut inside from the left to swung a cross into the Australian’s six-yard box where Asano was free enough to hit a left-foot strike past Socceroos goalkeeper Maty Ryan.

“Whenever we had the ball on that side, they were looking to pick me out,” VfB Stuttgart forward admitted.

For Australia it was a huge loss and they hurt their chances of make a fourth consecutive World Cup appearance. Now the Socceroos have to beat Thailand in Melbourne next Tuesday scoring as many goals as possible, and hope that Japan can beat or draw with Saudi Arabia to qualify for the 2018 World Cup.

The Australians turned the ball too much when in possession and they went quickly hit by Japanese in transition.

Without Huddersfield star Aaron Mooy, who was sidelined due to illness, Aussies lost the midfield battle.

Some selection could be questioned as Postecoglou’s decision to line up Brad Smith when he’s not playing at Bournemouth so far or to pick Kruse playing up top.

Smith’s selection highlighted Australia issues at left-back: Aziz Behich was cut from the initial 30-man squad for the game in Saitama while Alex Gersbach was on the bench. James Meredith has been the starter in previous Russia 2018 qualifying games.

The Aussie manager took responsibility for the team selection but you can’t limit your thoughts over there as the concerns was about the way team played.

Postecoglou’s side lacked fluidity as the ball movement wasn’t quick enough. Japan sat back and enjoyed forcing Aussies to play long balls, boosting their confidence as the game went on. Samurai Blue knew how Socceroos was going to play. And this is another thing that inevitably bring value to Halilhodzic’s work.

But Socceroos’ defeat to Japan wasn’t enough for Postecoglu’s team: in fact, Australia will have to get past Syria and a further play-off game against the fourth-placed team from CONCACAF if they want to reach the 2018 World Cup finals after missing out on automatic qualification berth following a 2-1 win over Thailand that meant Saudi Arabia needed only a win against Japan to move above the Socceroos in group B.

And Saudi did it as they defeated Japanese team sending Australia to meet the Syrians.

So, it’s playoff, once again. Australia’s frustrating campaign left coach Postecoglou under huge scrutiny and criticism and the shock of failing to directly qualify to the World Cup generated a big drama over there. Qualify for the World Cup is pivotal for the future of football in Australia as it instills the needed cash to support home football.

Postecoglou built a team able to play a proactive brand of football, in order to allow Australians to be ready to compete against top teams. But the reality is that Socceroos wasn’t good enough to simply compete against some Asian counterparts. The large use of passages and complex build-up without penetration left media, fans and players frustrated. Take a look to the game against the War Elephants as example: Postecoglou’s side dominated but the Australians wasn’t unable to score more than twice against the Thais when they needed of a ton of goals. Sure, they hit the post three times but they didn’t secure a win Tomi Juric’s score.

Postecoglou can’t take the blame for Australia’s lack of talent, but doubts can be raised about if in the coach has the footballers to play his system. Postecoglu will have his last chance to prove he’s right next 5 and 10 October.