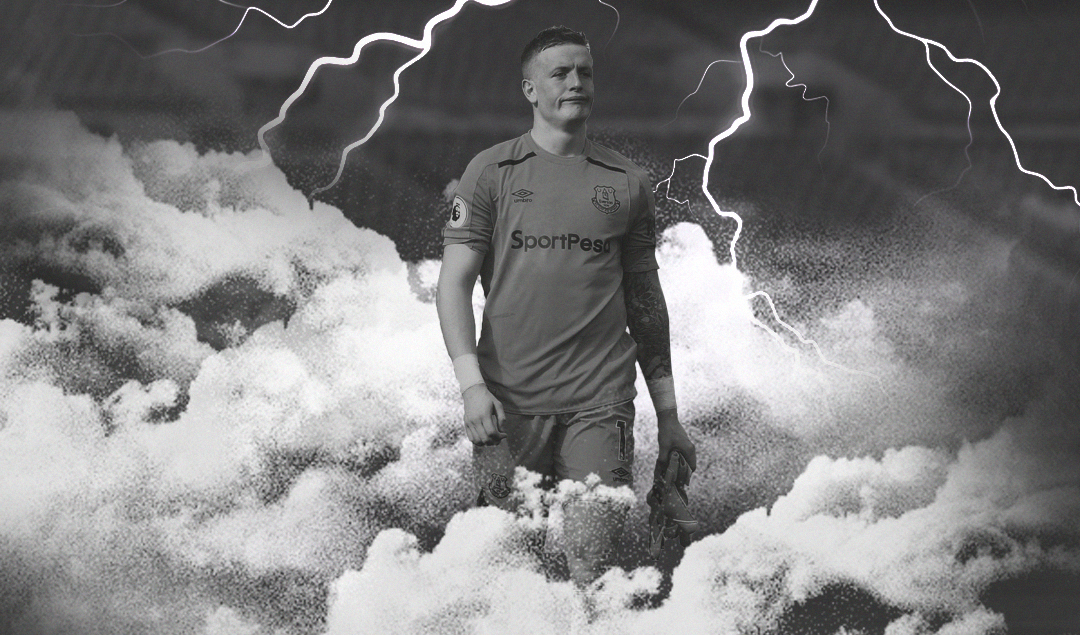 On July 3, 2018, at around 10 p.m, the whole of England went crazy; the Three Lions finally won a penalty shootout in a World Cup. Yes, Eric Dier scored the winning penalty, but it was a skinhead from Sunderland who was the real hero: Jordan Pickford.

His penalty save and passionate celebrations propelled him to legendary status among England fans. It felt like everyone could relate to him; he was a working-class lad who loved to go to raves and play football. Simply put, he was living the dream. Many believed that Pickford went to Russia as an inexperienced, inconsistent rookie, yet returned as a fantastic goalkeeper and a cult hero.

But despite his World Cup successes, Pickford has seriously struggled this season at Everton, which has led to many critics questioning whether he should still be England’s first choice goalkeeper.

The Everton shot stopper has made numerous blunders since his heroics in Russia. Dropping the ball in the 96th minute of the Merseyside derby allowed Divock Origi to tap in the winner from close range. This was especially ironic after he claimed that he wouldn’t “make mistakes” like Liverpool’s Allison.

Pickford also dropped an abysmal performance against Newcastle on March 9. From spilling the ball, rugby-tackling Salomón Rondónand, and palming the ball straight to Ayoze Pérez, he had a terrible game. He’s clearly struggling  and has made more errors leading to shots or goals than any other player in the Premier League this season.

His passion and borderline craziness was what made England fans like him so much in the summer, but he’s now being criticised for his enthusiasm and perceived lack of discipline. Stupid comments like insisting he “won’t make mistakes” set himself up for a ridiculing when he inevitably does. He needs to start doing his talking on the pitch.

The England number one’s lack of self control was apparent during his side’s loss to Newcastle. Being a former Sunderland player, it was obvious that he’d be pumped up for a game with their close rivals, but Pickford went too far. Arguing with the home fans throughout the game made him seem incredibly arrogant.

It’s clear that Pickford was overwhelmed by the occasion and therefore made several mistakes. Goalkeepers need to be calm and collected during big games, instilling confidence in their defence, but Pickford simply doesn’t do this.

Although Gareth Southgate hasn’t got a huge selection to choose from, there are a few English keepers that are now in contention for that no1 jersey. Burnley’s form suddenly improved when Tom Heaton came back from injury, which isn’t coincidental. Heaton hasn’t pulled on the Three Lions jersey for a while, and will be eager to return to the squad.

The veteran Ben Foster has been one of the best goalkeepers in the Premier League so far, and his brilliant performances have helped Watford challenge for Europa. He may be a short-term option at 36, but he’s still a reliable one.

On the younger side, Angus Gunn is arguably the most exciting English keeper around at the minute. A brilliant season on loan at Norwich earned him a permanent move to Southampton and he’s performing well for the Saints. Another young talent, Jack Butland, is a regular in the England squad, and once he returns to the Prem, he could be fighting for Pickford’s spot.

To assert himself as England’s first-choice goalkeeper, Pickford needs to mature. Great keepers like Ederson and Alisson Becker keep their cool and remain focused in big games, but Pickford just doesn’t do this. He needs to step his game up if he’s to go on and fulfill his vast potential.