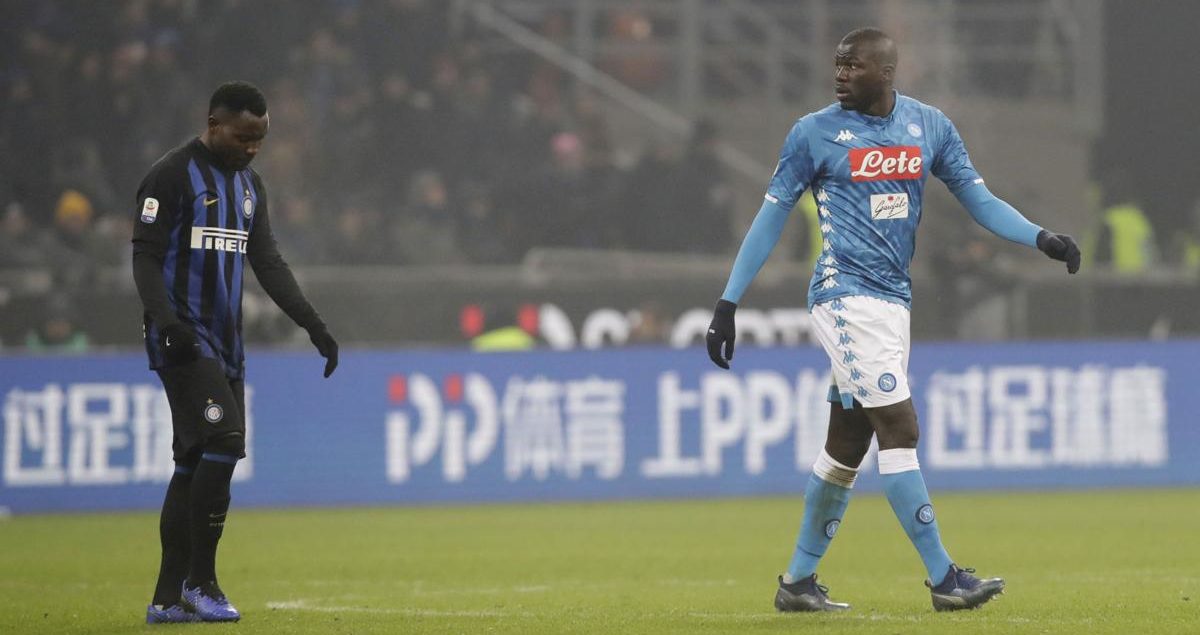 Kalidou Koulibaly is one of the world’s elite centre-backs. The 27-year old is a brick wall in Napoli’s backline and has attracted attention from some of the world’s biggest clubs aiming to acquire his signature. He’s a world-class defender, but above all, he’s a human, a human who deserves respect like everyone else. Such common courtesy is scant in the country he plays in. While Koulibaly has seen his career blossom in Serie A, he has also endured some of the darkest moments of his career in Italy.

Less than a week ago, Koulibaly was subject to heaps of racist abuse by Inter Milan fans before he was eventually sent off in his side’s defeat. The dismissal results in a 2-match ban for the defender, which seems fair and just until compared to the sanction handed to Inter Milan. The Italian side were punished for the racist abuse directed at Kalidou Koulibaly by being forced to play two matches behind closed doors. Napoli’s star defender will be sidelined for two matches for “sarcastically applauding” a referee, while Inter fans will endure a similar two-match ban for racially abusing him. Equating the two by handing down similar bans is a slap in the face to both Koulibaly and black players across Italy. It’s a monumental disgrace and a permanent stain on Italian football.

This isn’t the first time though, as Serie A sides have often been let off with barely a slap on the wrist after their ultras racially abused the Senegalese defender. In 2016, Lazio were fined a measly €50,000 and handed a two-match stadium restriction after their fans directed racist chants towards Koulibaly. In January of this year, Atalanta fans also directed racist chants toward Koulibaly, and were subsequently handed a suspended sentence of a one-match stadium restriction. Just this season, Juventus were fined €10,000 and forced to partially close their stadium for one game after Juventus supporters were found to be chanting racist abuse at Koulibaly. Now the latest incident involving Koulibaly has seen yet another Serie A side get away scot-free for the horrific act of racial abuse.

Since arriving in Napoli in 2014, Kalidou Koulibaly has been subject to at least four different accounts of vile, racial abuse, and that number will likely grow in 2019, as he grows in reputation, and as the league continues to do nothing to protect him. Minuscule fines and temporary stadium closures are feeble attempts at combatting the problem, and it gives the impression that the decision-makers at the top of Serie A and the government do not see racism as a serious issue in football. Italy’s Deputy Prime Minister, Matteo Salvini, dismissed and downplayed the racist chants directed at Koulibaly. In an interview with Tiki Taka, Salvini said: “Racism is the stuff of idiots in 2018, but let’s not put everything in the same pot. In the stadiums they also sing ‘Milan in flames’, would that be racism too? Bonucci was booed by the Milan fans, is that racism? Healthy teasing among fans is not to be considered racism.”

Not only does Italy’s football governing body fail to successfully punish and combat racism, but high-profile politicians have dismissed incidents of racial abuse as harmless taunting. Racism is a constant in both Italian football and Italian society, yet little is done to eradicate it in either body.

Carlo Ancelotti refuses to stand by and allow this to happen, and he has openly supported his decision to walk off the pitch. The Partenopei manager spoke in the wake of the latest racial abuse targeted at his center back, saying he asked the referee to suspend the game three times due to the chants, and that he would pull his team off the field next time it occurs, even if it meant forfeiting the match. The fact that Ancelotti even has to suggest this course of action is a condemnation of Italian society as a whole.

Serie A cannot sit by and allow fans to get away with racist abuse over and over again, but they do. Italian football is merely a microcosm of football’s racism problem, but no one wants to fix it. They may pretend they do, by marching out armbands that read “Kick It Out” and releasing statements, but the punishments handed down don’t reflect that. Federcalcio, Serie A clubs, FIFA, UEFA and football clubs around the world must do more and hand down severe punishments. To those in power, do something to make a change instead of just empty words.