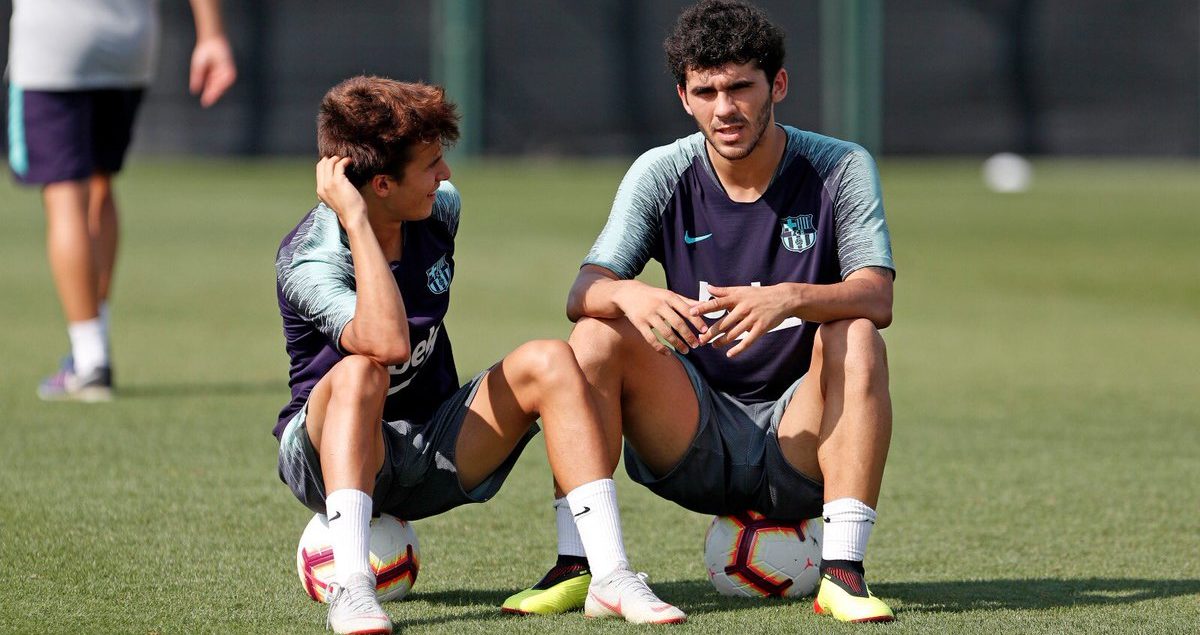 Youth production from FC Barcelona’s La Masia academy is renowned across the world. An intense level of pride is associated with the system that focuses on developing players into well-rounded human beings, instead of solely footballing machines. There have been amazing players to come through the system, from Pep Guardiola to Lionel Messi, and Andrés Iniesta to Gerard Piqué. However, the constant production line of world class talent comes with positives and drawbacks.

The organic development of local Catalan talent only further manifests a connection between the club, players, and supporters. Few things are more rewarding than seeing a homegrown player burst onto the scene and take the game by the horns. Even better is when they stay and cement their place in the team, like Messi or Xavi, and go on to become legends for their club and in the worldwide game. Johan Cruyff’s beautiful footballing brain gave birth to the notion, an homage to Ajax’s intense success with youth players and future triumph.

Yet, there will always remain a gargantuan weight that is piled onto these young players, the pressure to make it as one of the world’s best, following in the footsteps of legends. This crushing pressure, hoping to turn carbon into diamond, has wielded very little in terms of success stories from La Masia over the past few years. Cristian Tello and Marc Bartra now find themselves at Real Betis, performing to a good standard, but not good enough for Barça. This begs the question, if La Masia is producing talent that is only as good as Europa League level, then surely the expectations shouldn’t be so high?

It is a combination of past success stories and also a deeply entwined personal connection between fans, La Masia and the club. Speaking to one Catalan journalist, he feels that players such as Arthur (recently signed from Grêmio and performing excellently) find it difficult to win a place in Blaugrana hearts compared to an academy product. Whilst there are some new and exciting talents coming through, as shown during Barça’s Copa del Rey victory over Cultural Leonesa, there are still issues with La Masia. For every action there is an equal reaction, states Newton’s Third Law, much like how for every Leo Messi there is an Isaac Cuenca. La Masia’s occasional sprouting of brilliance is counteracted by the over-insistence of greatness upon those who aren’t capable.

Yet, with this in mind, there are several emerging talents who could stake a serious claim to staying at the club and pushing into the starting eleven. Carles Aleñá and Riqui Puig are two exciting players that are starting to make waves at the Catalan club. Aleñá has already ascended from Barça B into the first team squad, regularly making the bench for most La Liga games this season. He scored his first La Liga goal against Villarreal a few weeks ago, a sumptuous finish laid on beautifully by Messi. Whilst far too many reactionary tweets proclaimed that Aleñá was to be the new Messi–the symbolic passing of the torch from one great to a future great–there is some substance behind a more measured approach. Aleñá’s finish was a delicate chip – Messi-esque but never the true original – after an absurd pass by Messi, that only Messi could see. Playing alongside the greatest of all time will surely mean that Aleñá’s level of performance will increase, especially if it is laid on a plate for him.

He always looks confident on the ball and his passing is to a high standard, with the Cruyffian mannerisms drilled into him. But despite these brief flashes of promise, Aleñá still finds a full 90 minutes hard to come by. The signings of Arturo Vidal and Arthur only further pushed Aleñá down the pecking order, with Ernesto Valverde choosing experience and proven quality over a diamond in the rough. This is highly emblematic of modern day football.

There is a constant pressure to immediately deliver or face consequences, and Valverde recognises this. He is unable to rely solely upon La Masia because if it all goes wrong, he has very little to fall back on. Even in the cup tie against Leonesa, Valverde chose to start Ivan Rakitić. On paper this seems bewildering, playing your 31-year-old starter who could use a rest, instead of a hungry Barça B prospect. It is the fear that kills you; an impossible cup upset would ruin Valverde, so to take the ultimate safe option seems the sole plausible choice. Even later in the game, bringing on Sergio Busquets and Clément Lenglet appears to be overkill, stifling the chances of a youth player against a level of opposition that would allow for a relatively frictionless move into the first team.

Whilst Aleñá is the prominent youth player breaking through at the moment, there are several others waiting in the wings. Moussa Wagué is an excellent Senegalese talent, who has already made over 40 appearances in Belgium and been capped by his national team, having started in the World Cup this past summer. Work visa issues mean he hasn’t been able to make a first team appearance yet, but he is very well thought of as a future defender for the club. Juan Miranda is also knocking on the door of the first team. With only Jordi Alba for competition, after Lucas Digne moved on to Everton, the Spaniard has the chance to stake a claim to be the heir to Alba’s left back throne. A solid performance in the cup and against Tottenham show that he may have what it takes to succeed. Oriol Busquets – no relation to Sergio – is a defensive midfielder built in the image of Barça. Tall and confident on the ball, able to pick passes with ease and maintain simplicity, Busquets can feel aggrieved that a serious knee injury earlier in the year may have done some damage to his immediate chances of a breakthrough.

Perhaps the player that is most exciting, even more than Aleñá, is Ricardo ‘Riqui’ Puig. When he came on for Oriol Busquets against Leonesa, it looked like a schoolboy had entered the fray. His small frame was extenuated by his bright green boots as he began to get a feel for the game. He displayed neat touches in the midfield and linked up well with Aleñá, and as if that wasn’t enough, he put the icing on the cake with an assist out of the top drawer. The loose ball broke to him on the edge of the area and a deft, lofted through ball towards Denis Suárez allowed the Galician midfielder to control smoothly and finish with aplomb. Puig earned many plaudits for his cameo; rather than letting the game pass by him, he took it by the horns and demonstrated his quality.

Yet, for players such as Aleñá and Puig, there is such an intense level of competition for squad places against players who have faced an unfortunate fate, cautionary tales for any academy talents looking to break into the first team. Denis Suárez progressed through Barcelona B via Manchester City, but his first team opportunities have been limited, and loan spells across Spain are where he has made his mark. Munir is now 23, and having spent the last two seasons on loan at Valencia and Alavés, he looks unlikely to earn a starting spot anytime soon. Maybe the youth of today can take solace in the shape of Alba and Piqué, both of whom had to move away before coming back to Camp Nou and becoming mainstays.

Barcelona’s recent transfer policy also limits La Masia product’s chances. Philippe Coutinho and Ousmane Dembélé have both been signed for well over €120 million each but neither have maintained a continuous run of solid form that warrants their price tags. The signings of an aging Vidal and young players from other teams, such as Lenglet and Nélson Semedo, is somewhat a kick in the teeth to those trying to follow in the footsteps of greatness. Barça may be looking to replicate Real Madrid’s recent Champion’s League victories, done so without the presence of a major youth policy. To an extent, this also applies to PSG. By buying the best youth such as Kylian Mbappé and, if rumors are to be believed, Frenkie De Jong, the club can accelerate their youth revolutions without putting in the ground work. Neither of these two options are of Barça tradition, but the pressure from internal and external forces may alter the future policy at the club.

However, Barça must adhere to their past even in a future that is dictated by alien factors. The utilisation of La Masia is cut into the DNA of the club, and a rejection of this would be a rejection of their values. Against Tottenham, Aleñá and Miranda became the first new La Masia products to feature in the Champions League since Wilfrid Kaptoum in 2015. Kaptoum failed to capitalise on this and now plays for Real Betis B. Aleñá looked comfortable in the midfield three alongside Arthur and Rakitić, playing some good passes and excellent close control. Miranda’s performance was slightly more conservative, he is not as attacking as Jordi Alba, but he was comfortable in playing out from the back and defended well against the likes of Son. Overall, both players passed the eye test against a full strength Spurs side fighting tooth and nail to secure qualification.

It is now a case of joint effort between emerging players, the manager and the club so that the likes of Aleñá and Puig can develop properly in and around the first team, getting regular starts and substitute appearances. An aging midfield of Busquets, Rakitić and Vidal needs to be replaced, and if the youth is capable, then they should play.

Alan Hansen’s immortal words should always be ignored – “You can’t win anything with kids.” Manchester United knew this to be a falsity and so did Barcelona in a bygone era. Reigniting the belief in La Masia and the players that come from it would once again establish a beacon of excellence that would be the envy of the footballing world.