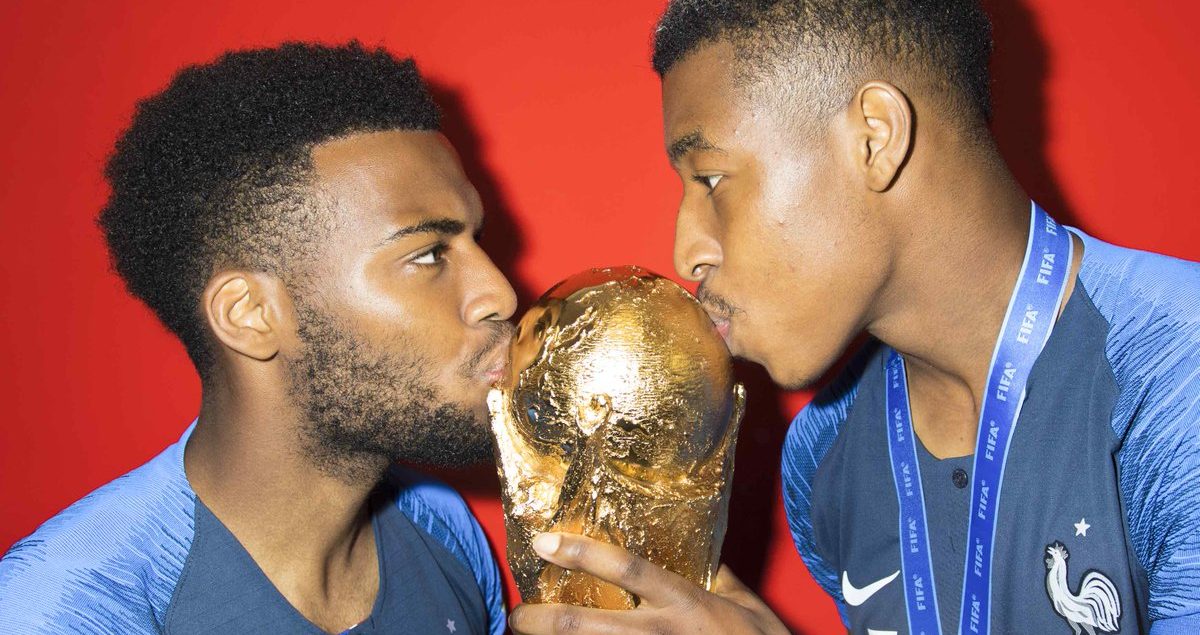 France’s 2018 World Cup run shed light on the plethora of personalities in their squad. The entire world fell in love with N’Golo Kanté’s teeming innocence, the intoxicating statistics of a teenage Kylian Mbappé, and the aura of companionship brought about Presnel Kimpembe’s playlist. But beyond these personalities, we can also explore the roots of immigration and how migrants are portrayed by the media, specifically in times of celebration.

Kimpembe, the son of a Congolese father and a Haitian mother, played his playlist on his now-iconic white Bluetooth speaker, parading it around like a trophy around his teammates. The music never failed to instigate a party atmosphere in the dressing room or team bus, and was almost always accompanied with jubilant cheer and dance. Although the 22-year-old only managed to play 90 minutes throughout the tournament due to the Umtiti-Varane partnership that lies ahead of him, his permanence and contagious joy brought the team to light, beyond their superstardom status.

Luckily for us, Kimpembe’s playlist has been adapted to both Spotify and Apple Music. A careful examination of the playlist’s contents tells us more about the identity of the French National Team. The playlist’s 42 songs are a combination of French music and African beats, a melting pot that resembles the backgrounds of the French players. The majority of the squad has familial ties to several African countries, including countries such as Democratic Republic of Congo and Mali. Just like the playlist, the players’ identities are a mixture of French and African.

Although no one should question the authenticity of this now-notorious French team, especially considering all but two of the players were born in France, the identity of this squad should be celebrated as a testament to the benefits of diversity. Despite many of the player’s lineages being traced to countries that were impacted by France’s far-reaching colonialism, their ability to assimilate into French society to be considered citizens of France should be widely celebrated. The families of these players were able to adapt to an entirely different culture, bringing along with them unique roots that add to the complexity of French culture.

In a retort to comedian Trevor Ryan’s joke about France’s victory being a victory for Africa, the French ambassador to the United States, Gérard Araud, attacked the statement and promoted the ‘Frenchness’ of the squad. This shunning of the players’ African roots is a naive argument – one can celebrate the ‘Frenchness’ of the players whilst simultaneously acknowledging and accepting their immigrant roots. There is no need to reject one reality for another – we should be able to accept and champion a blend of identities.

It is through one man’s iconic bluetooth speaker and playlist that we can observe the beauty of football through a small lens. An entire nation has gotten behind the backs of their players to push them to victory, no matter the color of their skin or their roots. The African roots of this French side are means for celebration for black people all around the world – to see the success of Africans who became French. It is a migrant success story that should be championed around the world as a testament to the beauty of immigration and assimilation. However, it brings up a tragic flaw in the depiction of migrants around the world.

Stories of African migrants have a pattern of being skewed by the national media – when these people have committed a crime, are unemployed, or any other unfavorable trait, they are referred to as African immigrants. On the flip side, whenever these migrants commits acts of heroism, such as winning their nation a World Cup, or saving a baby from falling off the side of a building, they are praised as citizens of their new country. This troubling tendency only adds fuel to the fire, and legitimizes those who hold racist views. The individual roots of these players should never delegitimize their ‘Frenchness;’ rather, it should include their ‘Africanness’ along with it.

Whatever we may have learned about the French team throughout the 2018 FIFA World Cup Russia, we can certainly say they are one of the most entertaining blends of personalities that we have ever seen. From Paul Pogba’s extroversion to N’Golo Kanté’s pureness, we have witnessed a group of players that stretch widely across the spectrum. A mixture of identities came together to propel France to their second-ever World Cup trophy, and the world watched on as the French tricolor emerged as victors. If there’s anything we should know, it’s that every team needs its own Presnel Kimpembe.