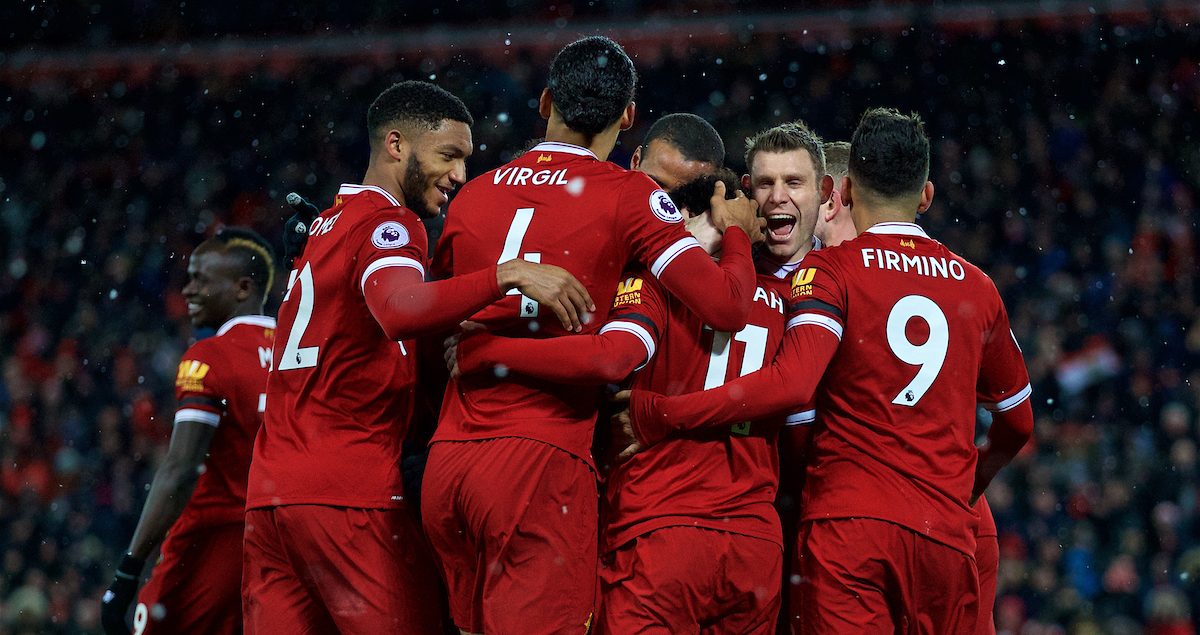 For any football club with lofty aspirations, signing the right type of players for a coach’s tactics is absolutely critical. There are also different paths that can be taken, in terms of winning league titles and making a run in a cup competition. For Liverpool and manager Jürgen Klopp, a Champions League triumph feels within reach thanks to the current collection of talent at Anfield.

This past summer saw the Reds put their money where their mouth was in terms of the transfer market, as they flexed their significant financial muscle to get the players that Klopp wanted. The midfield was strengthened with the additions of Naby Keïta and Fabinho, with each bringing their own unique qualities to the line-up.

The front three for Liverpool have already displayed their magnificent attacking capabilities in the English top flight. Mohamed Salah, Roberto Firmino and Sadio Mané form a seemingly unstoppable trident up front, as the three combined for 57 Premier League goals last term. They are able to come at the opposition in a variety of ways, with enough pace and skill on the ball to make life extremely difficult for any defenders.

At the back, Liverpool finally got the man they had been chasing for years, with Klopp breaking the transfer record for a defender with the signing of centre-back Virgil van Dijk. The Dutch international mixes size, strength and vision together to be a productive leader for the Liverpool defence. Youngsters Trent Alexander-Arnold and Joe Gomez continue to improve, and Reds fans should feel confident about the future of the team’s back-line.

Perhaps the most ambitious addition was at the goalkeeper position, with another record-breaking fee for the club involving Alisson Becker of AS Roma. For a reported sum that could exceed £66 million, Liverpool’s hierarchy needed Klopp to be sure that he was the best possible option available. That aspect was confirmed by the manager for the gifted Brazilian keeper, and he has shown flashes of brilliance early in his first season (especially on the ball).

All this adds up to a club with expectations as high as possible, and there is a need for Liverpool to take the next step. Klopp has guided his team to three cup finals since arriving on Merseyside, including last season’s UEFA Champions League final against Real Madrid, but none have ended in triumph. So much could have been different for the Reds if Sergio Ramos did not cross paths with Salah in the first half, and avoided the horrendous foul that would take him out of the game. But, if anything, it shows how Liverpool were so close to crossing the finish line and reaching another level, a level that they certainly have been at before.

The Reds have tasted Champions League success more than any other English club, having been crowned as Europe’s best on five occasions (most recently in 2005). The tournament means something a bit more at Anfield, and that can be seen in the matchday atmosphere. With the competition prioritised in a spectacular way, the line-up has been built with that objective being a key influence.

Klopp’s “gegenpressing” tactics require hard work and sharp positioning, especially for midfielders and forwards. Players are expected to close down space quickly and put constant pressure on the opposition. Winning possession in critical areas of the pitch and moving seamlessly into counterattacks is what helps to bring the goals for Liverpool, but it can also be a difficult philosophy to maintain due to the added energy required to make it truly effective.

Squad rotation, stamina and depth are all important components, which can make winning a league title a tough task with that style. Over the course of a 38-match season, these tactics will put a grind on any player. However, in a cup competition, Liverpool can strike like lightning. Impressive examples were seen during their run to the final this past May, as knockout draws versus the likes of Manchester City and Roma produced surreal displays of attacking excellence. Balancing all the competitions in one campaign may not be simple, but Klopp has the pieces in place to solve the club’s title puzzle.

Liverpool and Jürgen Klopp have spent a massive amount of money in the hopes of finding both domestic and international silverware. In the Premier League, Manchester City and Chelsea offer a formidable threat once again. But in the Champions League, the Reds have a serious advantage over many others due to the perfect blend of the right system and the right players.