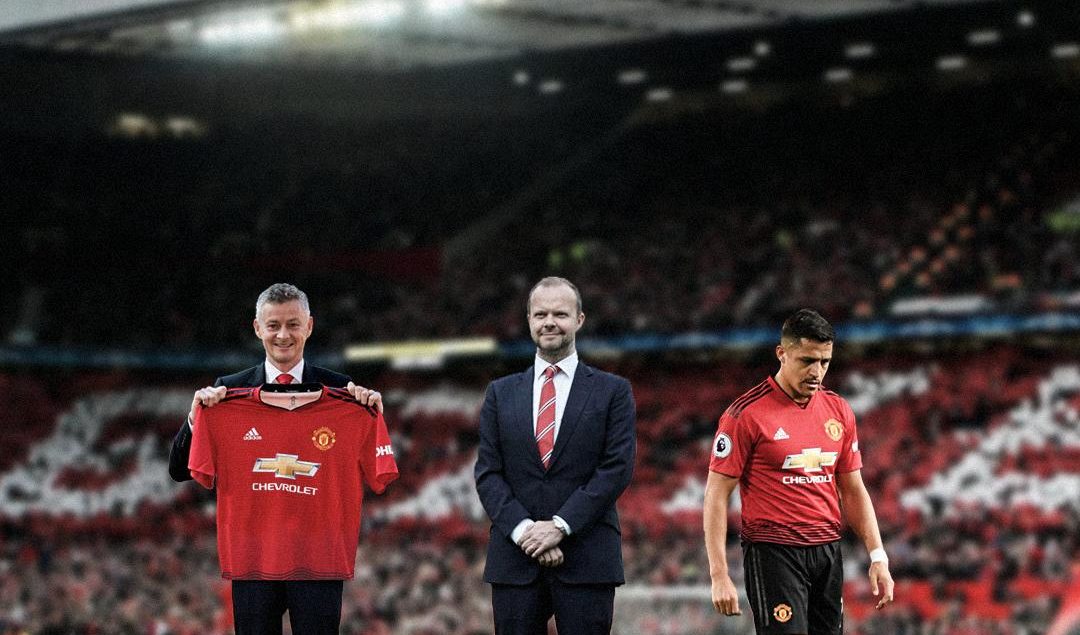 As the curtain falls on the 2018/19 Premier League season, followers of Manchester United will be very much glad to see the back of it. Their campaign has ended in utter misery with a 2-0 loss to the already relegated Cardiff. Ironically, the current United manager and ex-bluebird manager (who was in charge when the Welsh team were relegated in 2014) was complemented after the match.

‘That was the best he’d got Cardiff playing’, albeit, catastrophically from the alternate dugout. Jokes aside, this marks the end of a torrid spell for the baby-faced assassin. United’s two closest rivals are incomparably superior. Manchester City close in on a domestic treble and Liverpool chase their 6th European Cup, all of which, after a remarkable record breaking title challenge. It saw the silverware return to the blue side of the city for the second consecutive year, the ‘bragging rights’ are no applicable for a team clinically and objectively better.

United alternatively, finished in sixth, 32 points behind the champions, and more worryingly they sit only by the same distance of points above the relegation zone. This is a fact that without any further analysis, puts into perspective how far they have fallen behind. But as fans leave Old Trafford for the last time this season, should they be joyous in the termination of the pain that this season has brought them, or should they be more worried that it is just a symptom of things even more terrible, yet to come?

If we cast our minds back to when Ole Gunnar Solskjaer was appointed as the permanent manager of United in March. The team were on a miraculous run of form (unbeaten in 17 games) and after an incredible comeback in Paris, the board (admittedly with hindsight) made a monumental miscalculation. Chief Executive of the club, and usual subject to a lot of fans’ frustration, Ed Woodward, stated when Ole was brought in, that the length of the Norweigan’s tenure was going to be judged upon at the end of the season. Not only, did the board act against those words when caught up in the ‘wheel of good fortune’, but they saw it as a chance to capitalise on club’s public relations. And boy, did it go south from then on.

Since his appointment the Red Devils have lost 8 from 12, drawing and winning only 2 of their fixtures. An abhorrent third to the season. If replicated over the course of a full season and converted to a league points tally, this spell would actually see them relegated with 25 points. The feeling for most fans now: is nausea. Especially when they are reminded that just a few months back, their passions were swept up in the wins and the dreamy nostalgia of a 1999 rhetoric. No amount of Stone Roses can fix the wheel – a much more serious operation is required.

The club is globally recognised throughout the last several decades as one of Europe’s most successful football teams both on and off the pitch, but the problems throughout its organisation seem bigger than ever. If they are not treated they can prove fatal.

If we begin to dissect the structure of this colossal football club we can denote, that the since the departure of Sir Alex Ferguson, the brains of the club have been forced into the upstairs boardrooms mainly due to a string of failed managers. The decisions now are represented more recently by Woodward, the Glazers, the ‘loathsome’ suits of the club.

For the 27 years previous, the decisions were largely made from the gum-chewing Great Scot himself and his staff over that period. That in time, has constructed the identity of the club through its recruitment of talent and marquee signatures. The more contemporary focus is that the reliance on these businessmen and their leadership, can only deliver success in revenue through sponsorship and not through the football.

It is no secret that Manchester United’s number one status as the wealthiest club in the world in 2018 was due to their endorsements: 22 global partners, 7 media partners, 9 regional partners and 12 financial partners led by Chevrolet and Adidas. The result of which, angers an overwhelming proportion of the fan base as they believe that the owners, view the club as a cash cow for only improving their own prosperity and not that of football. A deeply destructive feeling for the integrity of the club that stole the love of those fans some twenty years ago. This is the heart that keeps this gigantic club alive – its mass worldwide appeal.

The anatomy of Manchester United, for the purposes of this metaphor, are as such: as aforementioned, the brains now, without a director or football or a Sir Alex, are operated from the boardroom. The heart is in its history; its success and thus its longstanding identity. The internal organs are represented by its various departments such as its coaches and more importantly its recruitment structure (ie what it can get ahold of and process).

Finally, the limbs are its players (the means of how it goes about the football world, which contribute to output). Each part of its body is inextricably linked, if the internal organs aren’t functioning then it cannot succeed externally. Likewise, if the players aren’t performing the club isn’t going anywhere.

The entire system, even under Ferguson, had begun to become dysfunctional. At Carrington in 2012, it was reported that the scouting system was depleted. At the, now AON Centre, a figure of around 50 scouts and staff have been hired or restructured since. This demonstrates a mass overhaul and perhaps even a realisation that things were not where they should be.

Talent acquisition towards the end of Fergie’s time was not the gleaming with the same glory we were used to in previous years. The likes of Buttner, Angelo Henriquez, Kagawa, Nick Powell, Jones, Smalling, Young and Bebe are not in the category of players by any stretch comparable with Tevez, Nani, Berbatov, Evra, Vidic, Van der Sar, Rooney, Heinze or Ronaldo, from a decade before. The signing of Robin van Persie also marked a move toward more short term solution players that we have seen more commonly under Mourinho’s style of recruitment.

Although Ferguson achieved unprecedented success, no one was under the impression that David Moyes was going to inherit a strong squad.

In the 6 years that constitute the post-Ferguson era this season is not their lowest table finish, nor has it produced the least attractive style of football, but with the blatant lack of character, leadership and motivation on the pitch, not for the first time, this May really does seem rock bottom.

Jose Mourinho was incapable of changing the attitude of this squad. Ultimately his failure to motivate cost him the job alongside with his drab press conferences and negative football. But his recent comments, stabbing that: ‘Finishing second with this team, was my greatest achievement’ seem more poignant than ever now. It is accurate to diagnose that the team’s discernable attitude has been proven once before – and now is a chronic infection.

On the pitch, the team that United assemble is constructed from a patchwork of previous managers’ players. From the stating XI we have seen for most of the season, their defence is primarily made up of old Ferguson signings, a midfield made of Mourinho’s Matic, Fred, Pogba etc, and an attack of his Lukaku with Van Gaal’s Martial. United’s academy players fill in the rest of the positions with Lingard and Rashford starting most games when fully fit.

This is a collection of players assembled without one singular tactical idea envisaged. At times, the motley bunch have clashed and looked bereft of any game plan – let alone an established footballing identity. In stark contrast, Klopp’s Liverpool play fast pressing football and Pep’s City play possession based ‘keep-ball’.

The Devils, on the other hand, possess no consistent or convincing style of play. United have also conceded the most goals they ever have in the Premier League era. They also have clear issues with no right sided winger in the squad. Not only is there a gulf in class but there is no comparably quality to measure their ‘rivals’ to. Issues that were not addressed in previous years, seem to be stacking up – unprocessed, causing cognitive dissonance.

Paul Pogba has undoubtedly been the best player, dubiously making it into the PFA team of the year with 11 assists and 16 goals. The French World Cup winner is United’s top scorer but he has split the fan base with his lacklustre attitude on and off the pitch. He regularly invites transfer rumours from other top clubs and with his Premier League transfer record fee and high wages, many view that he is still underperforming.

Mourinho cruelly categorised him as a ‘virus’ at Manchester United. He and Pogba clearly fell out, but without any further knowledge of what happens in the dressing room we can still see the influence that Pogba has. He is a global super star and his attitude, if negative, is powerful. It is also worth noting, that the signature of Alexis Sanchez has been nothing more than disastrous, and his monstrously high wages have been suggested to be a cause of a vacuum.

Overpaid and underperforming is the take-home headline of Manchester United’s squad. They have the highest wage bill in the country. No one predicted the Chilean’s fall from grace to be as bad as it is, but when breaking the wage bill records, it should always be considered the affect this could have if it does not go to plan. Martial has since signed a £200,000-a-week contract and he himself seems to amble the pitch with negative body language when things don’t go his way. Contract negotiations have been blown out of the water from Sanchez’ payments.

Spanish superstar-shot stopper David De Gea has fallen from grace, but they can’t seem to tie him down with a new contract either – has the Alexis vacuum swept him up too? Clearly the morale issue runs deeper; a stroppy storm looms over the Old Trafford dressing room. And it doesn’t take a football club the size of Man United, to identify that their recruitment and decision making has been dreadful over recent years. For the discussions for the brain surgery needed, there has been non-stop talk of the club appointing a director of football but we are yet to see anything distinctive beyond rumours.

The propaganda rehabilitation that Ole has tried to bring to the club is awash with the history that made them so great. His goal in 1999 was the ad campaign for their Champions League run this year which proved fatal when they met Messi’s Barcelona. Deja vu. But his ‘looking back’ to the might of United’s past seems passive and unassertive, even with reports that he refuses to park is Ferguson’s parking space at the AON complex.

Perhaps, the initiative might now be to look forward while holding on to some of the values of tradition that have circulated recently in the club. Missing out on Champions League football will not attract the cream of Europe’s best talent but there are rumours that Swansea starlet Daniel James will come to Old Trafford for a modest price tag of 15m. A move that seems to steer the club very gently from the direction of the overpriced and overpaid complex. However, what is unavoidable is the insurmountable task that Ole is approaching when overhauling the club’s bad players and attitude.

While the likes of Barcelona seem to have big names like De Jong, De Ligt and Griezmann on the cards and Real move for Hazard – United’s restructuring has not only fallen down the pecking order but it is also yet to be activated. With questionable authority and a lack of direction in the central organs of the Manchester United body, the cure for their maladies could yet be another decade away.