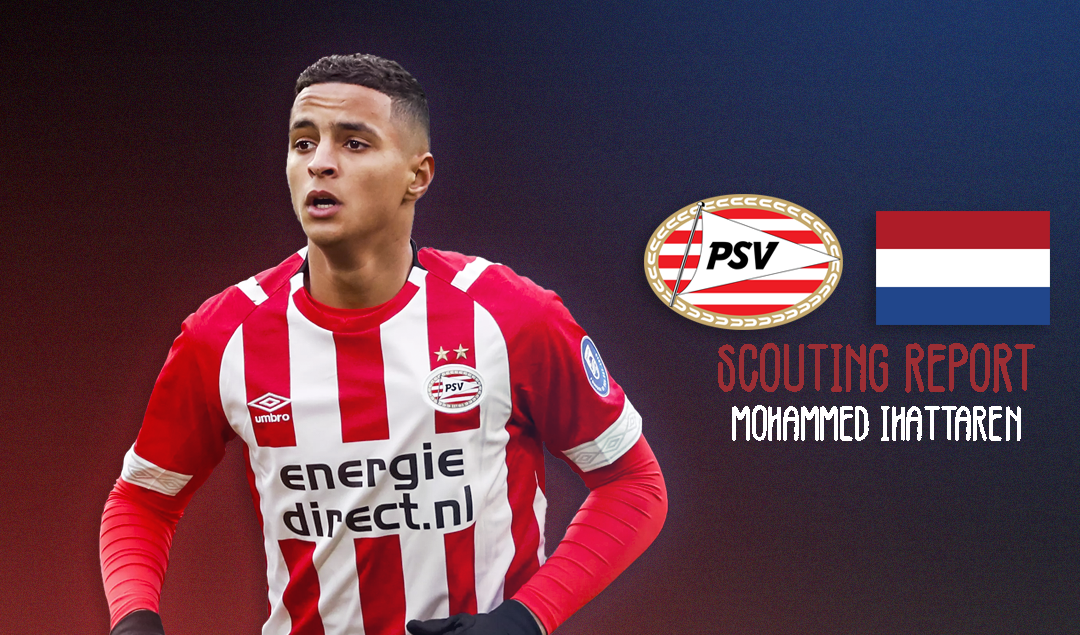 Born in Utrecht, Netherlands on February 12th, 2002 to Moroccan immigrants, Mohammed Ihattaren joined the PSV academy in 2009 at 8 years old.  He became the 4th-youngest debutant in the history of PSV to make his Eredivisie debut, when he made a 4-minute cameo against FC Groningen in a 2-1 win on January 26th, 2019.

His career has skyrocketed since the summer of 2018. After a fruitful 2017/18 campaign, in which he was crowned Dutch champions with PSV’s U19s (with Mark van Bommel as head coach) and winning the U17 Euros with the Netherlands that summer, Ihattaren signed his first professional contract with PSV after rejecting offers from Chelsea, Manchester City, Barcelona and Inter, whilst also attracting interest from high-profile agents such as Jorge Mendes and Mino Raiola.

With van Bommel moving up from academy coach to first team manager this past summer, he’s taken a liking to the teenage prodigy, and has even called him up to several training sessions with the senior team this season.

During the winter break, the PSV first team traveled to Qatar for a training camp, in which they also played a friendly against fellow Champions League participants and Belgian champions Club Brugge. PSV won the game 2-1, and Ihattaren came on as a 2nd half substitute for Érick Gutiérrez and assisted the PSV’s second goal of the game.

On January 20th, PSV resumed their Eredivisie campaign against FC Emmen, and Ihattaren was included in the match squad,  making him the youngest to achieve that in a competitive fixture since Ismael Aissati in 2005.

While his cameo against Gronigen was brief, it meant that Ihattaren became the first PSV academy graduate to debut for the senior team before playing for the Under-23s in a competitive fixture.

Since that game, he has played four more games for the first team, while also making his official debut for the Under-23s, in which he scored his first senior goal against Roda JC in a 2-2 draw last month.

He has now become a regular substitute for van Bommel, overtaking €6 million summer signing Gutiérrez in the pecking order, showing how much faith the PSV staff have in the 17-year old.

Like Hirving Lozano, who led PSV to the league title last season, Gutiérrez came from Pachuca’s academy and was generally considered to be one of Mexico’s finest youngsters. Under the guidance of former sporting director Marcel Brands, now of Everton, and current director John de Jong, PSV have specialized in scouting South American and Mexican talents over the past few years, with Lozano, as well as Uruguayan playmaker Gastón Pereiro and Argentine forward Maximiliano Romero arriving over the past few years.

‘Guti’ was expected to follow in the footsteps of Pereiro and Lozano and win a starting spot, but he’s had his progress blocked by the emergence of Pablo Rosario, who has risen from the youth team to become one of the breakout stars of the Eredivisie campaign. Furthermore, he’s also been leapfrogged by Ihattaren as of late. Despite being the club’s most expensive signing of last summer, the Mexican is struggling to find playing time amongst the finest talents of PSV’s academy.

On March 2nd, Ihattaren was rewarded with his first ever league start in a 2-0 win at Excelsior Rotterdam. Playing 76 minutes, the 17-year old impressed the crowd as well as the pundits with his ability to pick the moments of when to keep it simple, and when to take (sometimes excessive) risks, playing like a seasoned veteran in his starting debut at 17 years old. All of his first touches are progressive (meaning that he never aimed to play back unless no other choice), and he demonstrated a remarkable calmness and composure in possession. In addition, he boasted athleticism and energy off the ball, which allowed him to win the ball back several times in the game.

Even at 17, he’s not shy to claim the ball from teammates and take responsibility with set pieces, as evidenced by the fact that all of PSV’s corner kicks were taken by Ihattaren during the time he was on the pitch. Ihattaren played centrally as an attacking midfielder, driving the ball forward and perplexing defenders with his unpredictable movement and close control.

Ajax and Barcelona legend Ronald de Boer was so impressed with his performance that he opted for Ronald Koeman to bring him to the national team as soon as possible, while Excelsior striker Mounir El Hamdaoui (former Ajax, Tottenham and Fiorentina player) was also impressed, and said that Ihattaren is going to have a fantastic career.

Now, just what sort of footballer is Mohammed Ihattaren? People are quick to label him ‘’the new Afellay’’ because of his Moroccan origins, but he is much more than that.

Ihattaren is a mix between two of Arsenal’s most technical playmakers this decade: Santi Cazorla and Mesut Özil. He can strike, pass and dribble with the ball effortlessly with both his feet (like Cazorla), he can play in a deeper 6 role to dictate the game, but he’s also capable of playing in a more advanced role feeding the attackers (like Özil) in the final third.

His best traits are his intelligence (both on and off the ball), press resistance, vision, dribbling, both long and short passes, and set pieces, and despite his strong physique, he is adept at dribbling in tight spaces due to his excellent turning radius.

Capable of playing across midfield as well as on both wings, there’s no doubt that Ihattaren will quickly become a key component for PSV as well as the Dutch national team (providing he chooses the Dutch and not Morocco). In addition, expect Ihattaren to bench Pereiro in the #10 role before this season, as PSV attempt to win their third consecutive league title.

Despite his age, Ihattaren has shown glimpses of a certain maturity you would normally expect from 27-year olds. That, combined with his exceptional qualities both on and off the ball which made him Van Bommel’s favorite during their time in the U19s, puts him on course to becoming the starting playmaker for the reigning Dutch champions and the current title favorites.