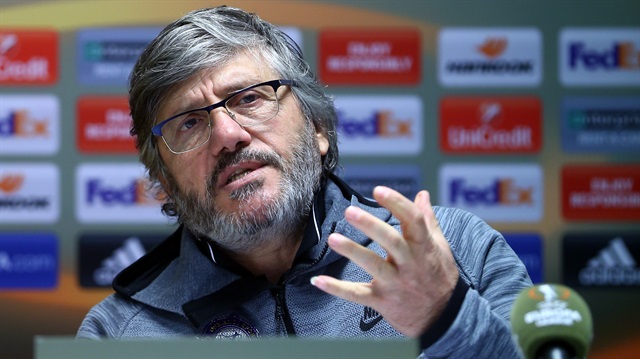 There was a moment after Osmanlispor’ 1-0 win against Çaykur Rizespor in the Turkish Süper Toto Lig at Yeni Rize Şehir Stadı, when Osmanlispor manager Mustafa Reşit Akçay (also known as “Mustafa Baba”) shook Hikmet Karaman’ hand. That moment was an idea in my head, to do an article about the weirdest, yet most exciting team in the Süper Lig.

Osmanlispor was founded as Ankara City Council Sport Club in 1978. In 1998 the name was switched to Büyükşehir Belediye Ankaraspor Kulübü and has many sub-divisions branching from the main football division. These include badminton, basketball, boxing, handball, ice hockey, judo, oil wrestling, table tennis and wrestling. Finally, in 2005, the football club changed its name to Ankara Spor A.Ş and only focused on football, while Büyükşehir Belediye Ankaraspor Kulübü continued its activity on branches other than football.

The current name refers to Osman I, founder of the Ottoman Empire.
Spine of the team:

What I mean by this is the people who are basically irreplaceable to Mustafa Baba, the Xavi and Iniesta to Guardiola’s Baba, if you will.

15/16 → It was a valuable game for Baba’s men, and they desperately needed a point in order to get Europa League football, and to stay in the top 6 race. They drew 0-0 at Kadiköy, they played very defensive minded and occasionally played on the break, but it didn’t seem as if they were out to win. Their main aim was very obvious from the start whistle, to see out a difficult away game and to get a valuable point away from home.

16/17 → Home game vs. Fenerbahce, didn’t go quite as planned. They were playing the same type of football as they were last season vs. the Sarı Kanaryalar, but from the first counter of the game, they won the game and Papa Ndiaye converted the penalty kick without any stress or hesitation. Advantage Osmanlispor, 9 minutes in. They tried to defend the lead, failing to do so at many times but Hakan Arıkan, saved them on multiple occasions before the half.

Fenerbahce came out the locker room just plain dominating the game, and it was just a matter of time until Robin van Persie, the flying Dutchman equalized with a strike.

Baba could have been very proud with that performance, and the way they defended.

1st leg → Osmanlispor didn’t start off that great, looking sluggish and giving away possession cheaply multiple times. Until the clock ticked 22:00. At that very moment, Ndiaye sprayed a long ball over the top to Pinto, who timed his run to perfection. Reminiscent of Dani Alves, who lays it across to Raul Rusescu, who has an open net to tap it into. 1-0, advantage Osmanlispor, against a very weak Villarreal who didn’t seem to have their heads set straight and looked to have underestimated Baba.

Kickoff –  Alexandre Pato passes it back to Bruno, who then at his turn passes it to Jonathan Dos Santos. JDS gets closed very quickly by the same man, Ndiaye. Loose ball falls to the goalscorer, Rusescu who looks to have evaded all pressing and belts one out from 40 yards.

Change of direction in mid air, which confuses the man between the sticks and it’s 2-0, in the space of 2 minutes.

And that’s how that first half ends, very exciting football from Osmanlispor who have capitalized on both their chances and have played some very good football thus far. But that will change, as you’ll see in the 2nd half report.

12 minutes into the 2nd half, Mehmet Güven gets awarded a red card for kneeing Alexandre Pato in the back while jumping up for a header. Bruno Soriano steps up to take the penalty, but he misses it. Of course, the defence hoof the ball out of play and Villareal get a corner.

They find a goal in the 56th minute, with Castillejo’s corner and Ndiaye’s run to the near post who places the ball calmly between the sticks and the goalkeeper; 1-2.

The away side get a second goal in the 74th minute, from a shocking defensive blunder by Baba’s men. Rukavina gets the ball played to him behind his man, who at his turn pulls it back to Alexandre Pato who makes no mistakes and scores.

Right after kickoff, Rusescu runs to the byline and crosses it low and hard, but Delarge can’t connect with it cleanly and misses the opportunity to claim the 3 points.

2nd leg → The first goal fell in the 8th minute, in favor of the away side. Pierro Webo finds the back of the net, with a ball which Villareal couldn’t clear after a dangerous cross from Pinto.

Later in the game, Adam Maher, the man on loan from Dutch side PSV, closes down the opponent in their own half and wins the ball fairly. After retaining possession, he fires a missile from long range, but keeper Andres Fernandez goes to ground and controls the ball easy.

With 20 minutes to play, Villarreal start to push men forward, particularly from the left side, where Denis Cheryshev weaves his way in front of goal but hits the side netting with his powerful shot.

15 minutes to play, Villarreal start to push men forward from the same left side, Bakambu plays a through ball to Cherysev in the box, which he connects with but a world class save from the trusted man between the sticks; Hakan Arikan makes sure that the home side doesn’t equalize.

6 minutes before halftime, again from that left side which Villarreal seem to exploit so very well, Bruno Soriano hits a freekick which skids the crossbar and goes out of play.

2 minutes in the 2nd half with the wings having flipped now, the danger still comes from the same side which is occupied by Cherysev. He shoots from long distance and goalkeeper Hakan Arikan makes a one handed, flying save to prevent the side from equalizing. Until the rebound, Rodrigo shoots a longshot from a 25 yards out and it deflects off of  Pinto on the way in, which surprised the keeper; 1-1.

Not much happened after that, until the second goal fell. Which came from none other than the man who stole the show in the first game, Raul Rusescu. The Romanian international came on in the 73th minute, to only have scored in the 75th.

Osmanlispor went all out attack, and exploited the right flank. Prochazaka shoots from a tight angle and keeper Andres spills the shot, where much like his first goal in the first leg, all he has to do is tap the goal in the back of the net.

Not much happened after that, Villarreal got the occasional counterattack but failed to capitalize on their chances.

There is a very clear pattern evolving here. They seem to get a goal very quickly on, but fail to defend the lead. This forces them to be unable to play their regular game and have to tighten up on attack.

All said and done, Mustafa Baba is building a very stable core and is showing the top clubs how a football club should be ran. It’s very much still a work in progress, but it’s very exciting to see it play out.

The same could be said about Basaksehir and Konyaspor. Basaksehir is undefeated still in the Süper Lig, having drawn 6 and won 10.

I myself am a very big Galatasaray fan. I have been loyal to the Sarı-Kırmızılılar since birth, but since 2015, we’ve been a disgusting ran club. Sacking coaches left, right and centre. Spending big on a French Ligue 2 LB and starting him against Atletico Madrid in the CL. Simply put, Gala has become a joke of a club.
Basaksehir and Osmanlispor are truly perfect examples for Turkish football, and I hope one of them gets on the map soon.