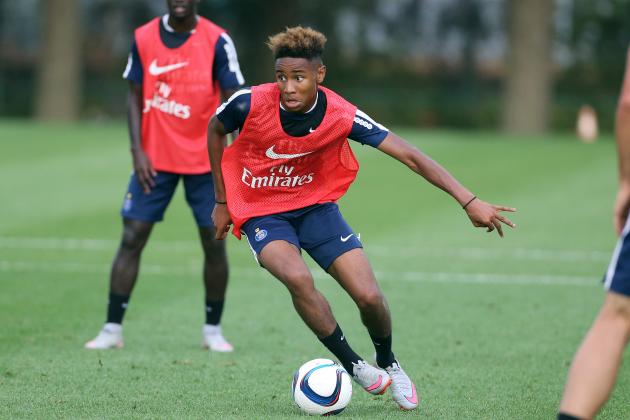 The Paris Saint-Germain academy or Centre de formation du Paris Saint Germain, based in St.-Germain-en-Laye have a knack of transforming young french talents into composed players, ready to take on Ligue 1. The likes of Mamadou Sakho, Steven N’Zonzi, Sylvain Distin, Nicolas Anelka and more recently Moussa Dembele and Kingsley Coman have walked through the doors of the Stade Georges Lefèvre, becoming well-trained and disciplined footballers in the process.

The most recent generation of Titis Parisiens (Parisian players having gone through the youth academy) such as Alphonse Areola, Adrien Rabiot and Presnel Kimpembe have begun to make their mark on the first team, and one of the next anticipated to do so is Christopher Nkunku, the highly rated 19-year old midfielder.

Who is Christopher Nkunku?

Born on the 14th of november 1997 in Lagny-sur-Marne, just east of Paris, he started his career at local clubs AS Marolles and RCP Fontainebleau, before moving on to the Paris Saint Germain academy at age 13. After 5 years with PSG’s various youth teams, where he passed through every age level and being frequently promoted all the while, then-first team manager Laurent Blanc called the youngster up for the club’s pre-season tour in 2015.

After a convincing performance in PSG’s 3-0 win over Wiener Sport-Club, he took to the International Champions Cup in the United States, where he played against the likes of Manchester United and Benfica, putting in confident performances that surprised most pundits and viewers. These displays payed off, as during the 2015/16 season he was regularly invited to train with the first team, while still playing for PSG’s youth team, where, despite being one of the youngest members of the squad, he stood out as one of the star players.

In the CFA (Championnat de France amateur de football, the fourth division of french football, comprised of semi-pro teams and reserve/youth teams alike), he scored 5 goals in 27 games but his true calling was on the continental stage, in the UEFA youth league. During PSG’s 9-game run to the final of the competition, Christopher Nkunku scored 3 goals, including a double in the club’s 4-1 rout of Real Madrid, and assisted 4 goals, including the assist for the decisive quarter-final goal against Middlesbrough and two assists in the club’s semi final rematch with Real Madrid, making him joint-second for most assists in the competition and ultimately earning him a spot on the competition’s team of the season.

In the first team, he made his debut for the club in their 2-0 champions league home win against Shakhtar Donetsk, making him the sixth youngest player to represent the Parisians in the champions league at only 18 years and 24 days old. Two weeks later he signed his first ever pro contract with the club, keeping him at the Parc des Princes until 2018. But his meteoric rise didn’t stop there; after being selected for the matchday squad 3 times by Laurent Blanc, he made his league debut for the club in a 0-0 draw with HSC Montpellier, before making his first start for the club just over a month later in their 2-0 win over Guingamp.

Since his debut for the club, he has played a total of 10 games and has gotten himself one assist. That’s an impressive number of playing hours for a player of his age, but both his former coach Laurent Blanc and current coach Unai Emery have confidence in him, the former saying in 2014;

“It’s very difficult to get into the first team, you need to be ruthless but at the same time you must be at ease with the ball, Christopher (Nkunku) ticks all these boxes.”

It thus goes without saying that he has both the talent and backing to succeed.

What’s his style of play?

The first thing you notice about Nkunku is his physique, or rather, his lack of it. At 1m77 he weighs only 68kgs, noticeably less than his other, smaller teammates, but this doesn’t stop the young frenchman. Often compared to midfield maestro and his own teammate, Marco Verratti, his physique is forgotten after five minutes of watching him play due to his obvious technical talent and ease on the ball. Aside from his silky footwork, he’s also a versatile player, able to play on the left side of midfield, as an attacking midfielder, as a box-to-box midfielder or as a deep-lying playmaker, able to dictate the tempo of attacking play and keep defensive solidity all the while.

While he played a more attacking role for the club’s youth teams, he’s been more than capable of adapting to a deeper role when called up to the first team, making precise passes with ease, something we can assume Laurent Blanc saw from him at the academy, where he’s used to making fast-paced intelligent passes in the attacking quadrant.

What are his strengths?

As said before, he has an exceptional technical ability, as demonstrated both in the UEFA youth league and the various competitions he’s played in for the first team, where he adapted smoothly into a deeper role. His link up play is also a major attribute, something he showed off on multiple occasions for the youth team where his vision, creativity and small build combined made him a dangerous attacking asset for les parisiens.

Another strength I haven’t yet mentioned is his dead-ball expertise. Last year he was the youth team’s designated set piece specialist, and his ability over a dead ball was never questioned. Many of his numerous assists and goals came from his natural right foot, capable of swinging the ball in and placing it with ruthless expertise.

What are his weaknesses?

While he may be a talented player with a maturity and composure seemingly beyond his age, he still lacks certain aspects of play that would set him apart more. The first thing I noticed was his heavy touch. For a midfielder used to playing in confined spaces and playing one-twos and other forms of fast attacking play, his touch is heavier than he might like, meaning he often gets into a scramble for the ball with an opposition player, usually ending in him losing due to his small physique.

Speaking of ball scrambles, another major weakness is his aggressivity. It’s often a fine line between tackles and fouls, and Nkunku has frequently gone too far either when pressing an opposition player or lunging in with a tackle when a player is on the counter. His stamina is remarkable but it means he’s often caught off guard when PSG are suddenly forced onto the back foot, compelling him to get overly aggressive with the opposition player in possession of the ball.
There is no doubt that Christopher Nkunku has an exceptional amount of raw talent and is already adapting well to playing at the highest level of pro football at the age of 19, but if he doesn’t work on his current drawbacks and continuously aim to increase the level at which he one day might be able to attain, he will remain nothing more than another talent with unfulfilled potential.