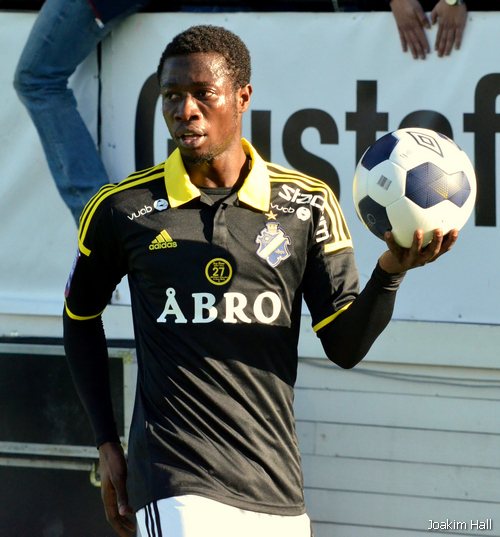 In a team where the rising star Alexander Isak stole the headlights 2016, it’s another player that many would describe as the heart and lungs of the team.

Ebenezer Ofori joined the Stockholm-based club AIK from his team back at home in Ghana, New Edubiase United, at the age of 18 in 2013. The Swedish club had several meticulous scouting reports on Ofori and when they saw him at 2013s U20-World Cup in Turkey, and they wanted to seal the deal. Despite him appearing just twice in the tournament, they saw his unquestionable talent and obvious potential.

“At that time he played as left back. But we had watched DVDs of him as a central midfielder as well. The feeling was that he was so good at the ball that he could manage to play there. And not only good on the ball, you can’t tell if he has hips or not, he rotates and turn in a way that I have never seen before”, said the sporting director of AIK, Bjorn Wesstrom, to the Swedish paper “Sportbladet” in 2015, after a dominant performance by Ofori in one of the most important games of the season versus their local rivals Hammarby.

At his first full season at AIK, Ofori alternated between winger/wingback and, what later would become undoubtedly his best position, central midfield. In his second and his third season at AIK, the latest one, was he a permanent part of AIKs midfield playing in a 3-5-2 system as a mediocentro with two interiors slightly ahead of him. His ability to read the game makes him an excellent interceptor. He proves that you don’t have to be big to be a good stopper of attacks. With his 1.72 meters would you think that it would be a problem for him but it certainly isn’t. His technical abilities are superior in Allsvenskan and he dictates the play in a masterly way with his flawless left foot. You could find him in the top layer in passing percentage last season in the Swedish league with his 88.1% to the right address. If you watch AIK, you notice how the young Ghanaian always beats his opponents, vigorously pressing to win the ball back. Regardless of it’s through a pass or a dribble, he knows how to beat his opponents and break the lines. We shouldn’t forget his willingness to contribute in the final third as well; 5 goals and 16 assists during three seasons at AIK indicates that it´s not very often, but in a given position he works as a raumdeuter with his ability to find the right spaces to kill an offensive attack with a finish or set up a teammate.
Ofori still has some parts in his game to improve. 22 yellow cards in 92 games in AIK overall, including 11 yellow cards in 34 games last season, shows a player who often lives on the edge. Not a single red card during his spell at AIK is a counterargument to that though. His almost arrogant way of playing can make you go crazy sometimes; he makes it out of danger most often but sometimes it leads to crucial mistakes. It could be because he feels superior in the league, because he is without a doubt one of the best five players in Allsvenskan. A lot of people would call him the best, and it’s not a coincidence that elite European sides in Europe wants his signature on a contract.