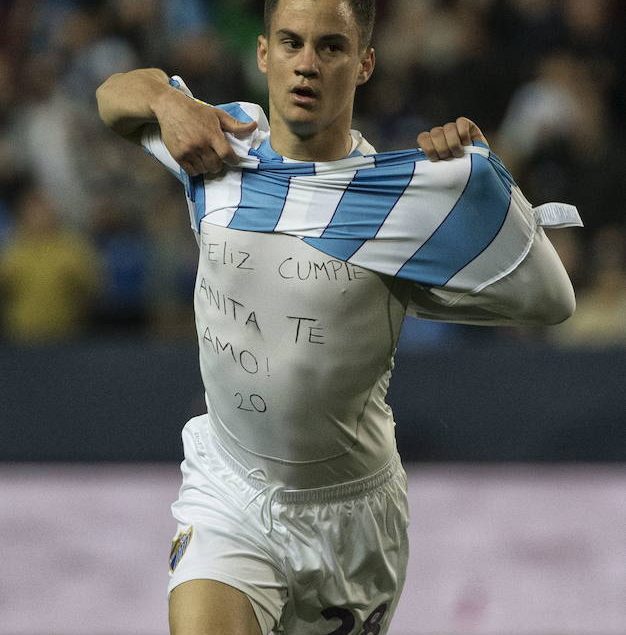 Juan Pablo Añor, better known as Juanpi(Caracas, Venezuela, January 24,  1994), is a Venezuelan footballer that plays as a midfielder for Málaga CF in the Primera División de España, or La Liga.
At just 15,  Juanpi came to Málaga’s youth team where he began to stand out as a midfielder, but moreover, in his preferred position as a winger. In his first three years in the Martiricos youth team, he scored 37 goals in 72 games.

Thanks to his 37 goals, Juanpi reached Atlético Malagueño, the feeder team of Málaga. This is where he began to really demonstrate his quality, becoming one of the most sought after players in his position, along with other jewels from Los Boquerones like Samu Castilla and Sergi Darder.

In the summer of 2013, Juanpi was called up to the preseason friendly squad by manager Bernd Schuster, and he played in 26 games with the youth team managed by Javi Gracia, scoring 11 goals, with superb individual performances such as against Martos CD.

As a result of these great performances, Gracia, who became coach of the first team, decided to play him, despite still being in the youth team, which is why the entire season he wore the number #28.

Juanpi made his Liga debut against Valencia, in the second week, in a thirteen minute cameo as a super-sub. Just three weeks later, Javi Gracia decided to start him against Barcelona, where he had a marvelous performance, in which he squandered efforts, as a winger in the few times that the team attacked, but above all, where Juanpi performed the best was as a left winger, stopping the attacks of Barcelona, helping Málaga gain a 0-0 draw. The good news didn’t stop there for the academy product; in November, he was called up to the Venezuelan national team and debuted in a friendly against Chile.

This season, he played 12 minutes against Real Madrid, where he almost scored an amazing goal from a free kick, forcing Iker Casillas to make a great save and rebound the shot from the post, and in December he played the two legs of the Copa Del Rey tie against Deportivo.

Without a doubt, the competition where he reaped the most minutes and achievements has been the Copa Del Rey, where he played in 5 of the 6 matches that Málaga played in the 2014/15 season, all of them as a starter. His best match was in the away leg of the Round of 16, where he played Levante on January 6, where the Venezuelan decided to put on a show from the Magic King, making a golazo after a superb play that finished from a left-footed dribble into the corner, and giving an assist to Ricardo Horta, who sealed it at 2-0.

In the 2015/16 season, due to the difficult situation at La Rosaleda, he had to accept the responsibility of playing more often with the first team. He played 30 matches, in which he scored 4 goals and made 2 assists. This same year, he played in Copa América with Venezuela and in the World Cup qualifiers, officially debuting for the national team.

This season, he has played 16 games, scoring one goal.

Juanpi now plays in the center of the pitch, as an interior. Lately, starting here, during the game he will switch to the wing. His biggest gift is entering the area from the wing, as he’s extremely quick and has a great acceleration. When he plays on the wing, where he performs the best and makes the smartest decisions, is from facing towards inside, and shooting accurately, where he has scored several goals or by crossing, which is one of Juanpi’s strongest attributes. Whenever Duda is not on the pitch, Juanpi always takes the free kicks and the corners.

Up until now, this is all I can tell you about the Venezuelan youngster.