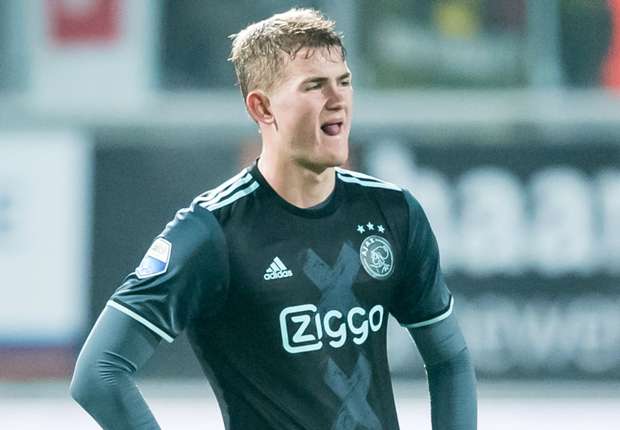 Ajax Amsterdam is a club renowned for its history, style of play, and above all its phenomenal youth academy that continues to churn out world class talent year after year and this Ajax team has no shortage of superb youngsters. Kasper Dolberg, Jairo Riedewald, and Donny Van de Beek headline our current crop of homegrown talent while the likes of Justin Kluivert, Abdelhak Nouri and Vaclav Cerny are eager to turn their undoubted potential into more first team appearances. However, it may be the youngest of them that has the greatest potential to be a superstar… 17 year old Matthijs de Ligt.

Matthijs de Ligt has slotted seamlessly into the Ajax first team since his promotion on October 24th and has become a regular member of matchday squads. He is beginning to make more and more appearances as he continues to impress head coach Peter Bosz at every opportunity. I fully expect de Ligt to get more minutes as the season progresses and I would not be surprised if he eventually usurps Nick Viergever or Riedewald as first choice center back.

Matthijs de Ligt is a prototypical Ajax center half who is supremely poised and confident despite his tender years. A member of the Ajax youth academy since he was 9 years old it is no surprise that he is incredibly comfortable with the ball at his feet. The Ajax system is based on ball possession that requires extremely gifted center backs that can keep the ball and play incisive passes into the midfielders and strikers and that education is clear to see in de Ligt’s game. He routinely plays great passes between the lines and is always available to recirculate the ball and maintain possession. He also possesses the ability to play a long diagonal pass in the mould of former Ajax center backs, Toby Alderweireld and Jan Vertonghen.

But, what differentiates de Ligt from most other ball-playing center backs is that he couples his brilliant technique with equally superb defensive skills. He is strong, commanding and very aggressive. Given his background as a midfielder in the youth system he is comfortable pushing up high to win the ball back as quickly as possible which is ideal for Ajax’s desire to high-press. He exhibited this skill routinely in the Europa League match against Panathinaikos where they struggled to get out of Ajax’s half due to de Ligt’s intense pressure. One key component of de Ligt’s skill set is that he is quite strong, so he does not shy away from physical battles like some other ball-playing center backs (Marc Bartra) tend to do.

While de Ligt is clearly a brilliant player, he does have some weaknesses. It is hugely advantageous that he is still only 17 because his two main weaknesses – speed and height – could be rectified as he matures. De Ligt is only 6 feet tall or 1.83m and while this not short it does mean that he loses aerial duals against taller strikers. He tries to work around this by using his strength to jostle into better positions to win the ball, but occasionally there is nothing he can do and the ball cannot be won. His biggest weakness, however, is that he is not very quick, so if he gets caught out of position he lacks the speed of Raphael Varane or Sergio Ramos to get back into position. De Ligt has time on his side and given that he only turned 17 in August he can work on his speed and hopefully grow a couple more inches because if he does so then the sky is the limit for the young defender from Leiderdorp.

Vertonghen was developed in the Ajax academy and de Ligt is nearly a carbon copy besides the fact that he is right-footed. Similar athleticism and equally impressive on the ball, de Ligt has brought the memories of Vertonghen back to the Arena and if he develops into the type of leader and captain that Vertonghen became, then Ajax will have a real gem on their hands.