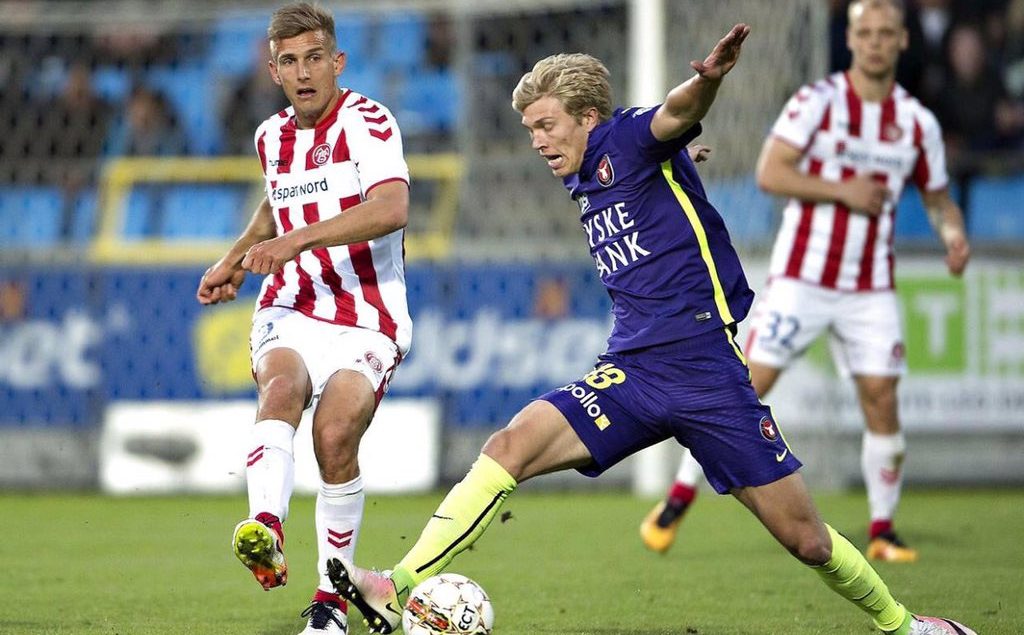 Surprisingly, FC Midtjylland, founded in only 1999 after the merger of local clubs Herning Fremad and Ikast BK, were the first club in Denmark to establish an organized football academy. Inspired by FC Nantes Atlantique’s academy concept, FCM directors Claus Steinlein and Flemming Broe built the FC Midtjylland akademi on a concept that has to this day proven to be the most successful in Denmark. Noticing how much territory FC Midtjylland represents on Danish soil, considering how far inland the club is and how closely collected other clubs are, Steinlein and Broe slowly started incorporating local youth teams from mid and west Jutland, the areas of Denmark the club is closest connected to, promising them finance and professional aid in exchange for youth talents. This concept has only been in place since 2004 but has already produced footballing talents such as Simon Kjær, Winston Reid, Erik Sviatchenko and Pione Sisto, who all started off at one of FCM’s local partner clubs before joining the central academy.

Although the FC Midtjylland team is already jam-packed of academy talents, one has recently shot to stardom, standing head and shoulders above his academy peers; this is Rasmus Nissen-Kristensen.

Although that is his full name, both himself, his family and the Danish media just call him “NK” or “Nissen” (which means Elf in Danish). Despite the somewhat childish nickname, do not be fooled, because Rasmus Nissen-Kristensen is an all-round no-nonsense full-back, a sort of backlash to the current influx of full-backs with good technical skill but the defensive abilities of a plum. More on that later though. Nissen Kristensen, Midtjylland’s no.43, is currently 19 years old and stands at a respectable 1m76. Born into a football family (His uncle, Sigurd Kristensen and cousin, Leon Jessen, are both pro footballers), he joined local club Brande IF (an FCM academy partner club) at age 6 where he played for 6 years, showing considerable talent at a young age, before joining Herning Fremad (one of FC Midtjylland’s predecessor clubs, still exists although under ownership of the parent club), where he played for an additional 2 years, before finally signing a youth contract with FC Midtjylland’s academy in 2012. In the 4 years he was active in the youth squad, his rise was anything but stuttered, as he continuously rose to the challenges ahead, being constantly promoted up age groups and performing consistently within each squad. He won the Danish U17 league before going on the win the Danish U19 league not once but twice in his two years there. He also played for the U19 team for most of their UEFA youth league campaign, notably being captain in their win against Atletico Madrid in the round of 16. His biggest moment came in march 2016, when he was substituted on for the first team after 40 minutes of play against FC Nordsjælland to replace traditional right-back Andre Ibsen Rømer, who had been sent off. Completely untested in the first division of Danish football, Nissen-Kristensen looked all but inexperienced, maintaining a comprehensive knowledge of his space and providing an attacking threat all the while. Although FC Nordsjælland went on to win the game 2-1, pundits took notice of Rasmus Nissen-Kristensen’s convincing performance, and were treated to more of the same a week later, when he got his first start for the club in their home game against Hobro IK. In his first home game for his childhood club, it took him no more than 2 minutes to make a mark, flicking a corner onto attacker Rilwan Hassan’s path, who put the wolves 1-0 up. Aside from the fantasy football points, he also made life impossible for Hobro’s attackers, seemingly all over the place whenever they were on the front foot. Things only got better from there, as one month later he played the full 90 minutes again, this time in his unnatural left-back position against Odense Boldklub. Having already smashed all expectations set for him, he proceeded to cause havoc on the left, as both an attacking asset and as an omnipresent force defensively. He once again went on to grab an assist, flicking another corner onto the path of the goalscorer, this time Martin Pusic. His performance was so convincing that not only did he go on to receive the Man of the Match award, but was also highly praised by his opponent, OB’s right winger Ari Skulason who called him a “pain in the ass”, considering he only managed to get 5 crosses in the duration of the match and won not a single header against the 18-year old Dane. Since his meteoric rise to the first team, Nissen Kristensen has not looked down, and has proved to be constant competition for the right-back spot, having now played 32 superliga games and 8 Europa league qualifiers, bagging himself 2 goals and 7 assists during that time.

Aside from his game time for FC Midtjylland, he has a considerable number of matches under his belt for the various Danish national youth teams, having played 24 games for the u18 team to the u21 team, being promoted nearly twice every year since his debut in 2015.

Before we get an in-depth look into his game, his most mentioned characteristic must be his self-confidence. Both his teammates and coaches have stated on multiple occasions that he’s not just confident in himself off the pitch but on it too, making tackles that put him in danger or taking risks most other players might not want to take.

FC Midtjylland’s ex-captain-turned-coach, Kristian Bach-Bak (who has played 260 games for the club as a defender) has said:

The first thing that comes to mind if you watch NK is aggressivity. His blistering pace, knowledge of space, positioning on the field and his physical advantage combined in an already very physical league would make him an interesting asset for any club, if he knows how to string them together. Fortunately for FC Midtjylland, so far things have been going well for NK.

His willingness to throw himself for tackles and his drive to collect every last ball has forced opposition teams to look past his age to find a way around him. In his 32 league games for the club, Kristensen has the stats to match the characteristics. He won an average of 52% of duels per match, ran an average of 9497 meters per match (That’s 600 m+ than the league average for a defender) and averaged more tackles and blocks than the league average for defenders.

In fact, not only is he above average, but most of the time he’s really punching above his alleged weight, having some of the best aerial duel success rates and being one of the highest frequency tacklers in the Danish Superliga.

Played in a team that relies on counters and set pieces to score goals, he seems ideal for both, considering his peerless speed, his lightning reflexes, his aerial supremacy and his strength both in and out of the box. A testament to his abilities on set pieces is that not only have half of his superliga assists come from dead ball situations, but also 45% of his shots have come from his head (more than from anywhere else). His physical strength is not misused either, which is all the more intriguing considering the tendency youth players have to either be too cautious and focus on technical ability, or too reckless, making avoidable mistakes and committing far too many fouls to concentrate on improving his game. Nissen, in comparison, has received a grand total of 5 yellow cards in his professional career of 46 matches, and committs fewer fouls than the average for superliga defenders.

As said by Kristian Bach-Bak, his versatility as a player isn’t his main asset, instead it’s his defensive solidity. Although much can be said of his attacking competence, it is important to note how far defenders have drifted from their past definition. Although in some cases this can be a good sign, making the game more exciting and having fewer one-dimensional players, it has backlashed, meaning that more and more defenders have valuable assets that are predominantly non-defensive (i.e: John Stones or Alberto Moreno). So while my praise for NK’s attacking quality could go on, I feel it is essential to point out the importance of his defensive supremacy. His self-confidence and ruthlessness when Midtjylland are on the back foot is a breath of fresh air in a world of full-backs constantly being caught off guard on the counter.

Aside from his aggressive nature, he also reaps the benefits of being naturally quick, making him a hell for opposition wingers and defenders alike. These two main assets, combined with his inexhaustible stamina make him one of the best versatile defenders in the danish league, at only 19 years of age.

Having touched the ball more than the overall league average and having won both more offensive and defensive duels than the league average, his versatility and knowledge of the game is somewhat unparalleled, making him an unknown quantity both at home and abroad. A good example is when on his first full start for the Danish U21 team against Luxembourg, he made the right flank his in all aspects of the game, not only dominating the attackers he faced, but remaining imperial in attack.

I cannot understate how much can be said about Nissen-Kristensen’s multiple abilities, but there are of course numerous shortcomings in his game, otherwise he’d be at Barcelona instead of FC Midtjylland. I admit I’ve said a lot about his self-confidence, vision and bravery in both defensive and offensive situations, but that doesn’t always translate into results.

His tendency to opt for the easy solution, whether it be a clearance instead of a pass in defense, or a dribble instead of a cross in attack, his impulsive decision making is the biggest downside of his resilient personality.

The way I’ve sang his praises so far makes it sound like I’ve discovered a gem who could outclass Real Madrid on a cold windy night in Stoke, but that’s (probably) not the case. As bold as he might seen, he’s remained humble when it comes to his ability, and rightly so. He’s keen to point out that he’s only 19, and it took players such as Pione Sisto dozens of superliga masterclasses and a few europa league ones (including 2 famous games against Man Utd.) to earn him a move to Celta Vigo, not 4 or 5, which is what Nissen has achieved so far. He and I alike remain optimistic regarding his future, especially in light of the versatility and raw talent he has flaunted to this day. This optimism shouldn’t be mistaken for naïveté though, as anyone who knows football knows how quickly things can go downhill.

Nissen-Kristensen has already proven he has the ability and individuality to shine on a bigger stage, but that’s not as important as proving he has consistency, something he still has adequate time to do.