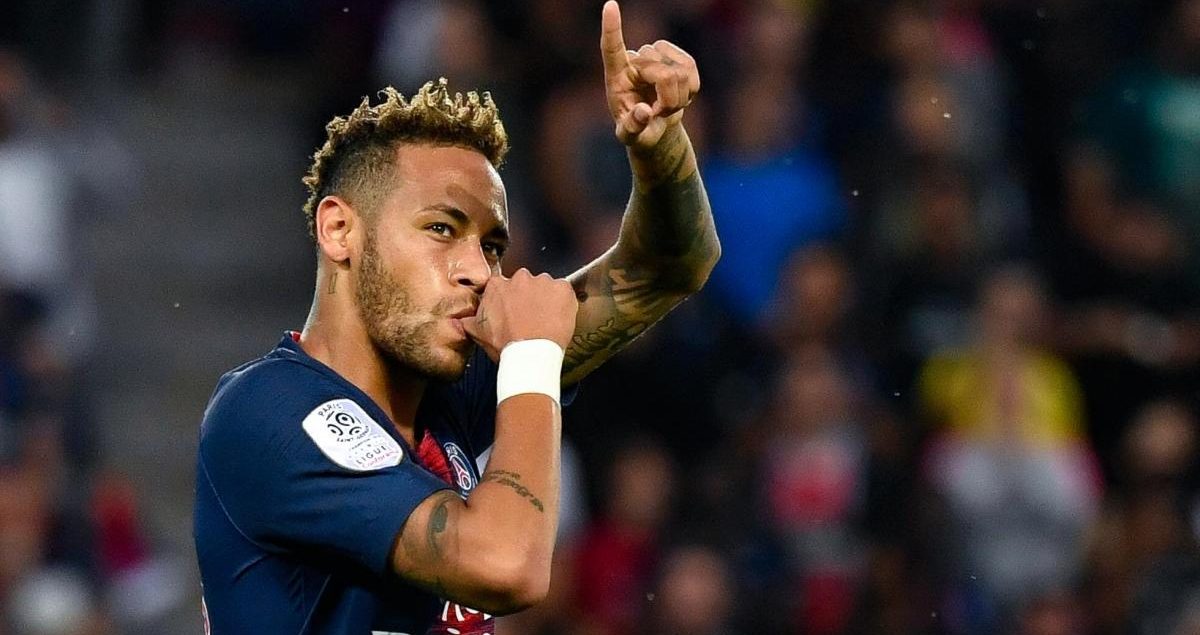 The phrase “footballing Gods” has been circulated among the wielders of football clichés for decades, now. It, of course, refers to the higher powers of football; an act asserting some control over what is an innately chaotic game.

But what if the Gods were the players themselves?

Lionel Messi reigns over all as the God of Majesty. Cristiano Ronaldo stands beside him as the God of Excellence. There are others, too, in the pantheon of divine beings revered on a weekly basis by congregations of football stadiums.

What then, would that make Neymar?

Ever the pantomime villain in the eyes of football’s bourgeoisie, the world’s most expensive footballer has yet to prove himself to be truly great. He dives, he is notorious for self-indulgence, and there is an aura of arrogance about everything that he does, and he is often maligned simply for showing off.

What does that make Neymar? Many would see him as the God of Indulgence, of Gluttony, and of Exuberance. But Neymar’s divine domain is different: it’s the one of flair, of beating players, of putting on a show. Perhaps he is the God of Extravagance.

He is magnetic. There is an allure about him that no other footballer on the planet possesses. Watching him play is an exhibition as much as it is a competition. He’s just…  So. Much. Fun.

The glitz. The glamour. The money. The stardom. The superficiality. That fun? That magnetism? That’s modern football. Bemoaned as it may be, football has become about brands, and the most successful brand of all is that of Neymar.

He makes €700,000 a week (€36.8 million a year) in club salary alone (per a report from Football Leaks); that’s more than nine Ligue 1 clubs spend on their entire wage bill. One of those clubs is Guingamp, who led against Neymar’s Paris St. Germain in the first matchday of the season. His record-breaking signing was funded by the subsidiary of a country’s wealth, as a means of obtaining soft power for Sheikh Nasser Al Khelaifi – and by extension, the entire nation of Qatar.

It was Al Khelaifi who said to reporters on August 4th, in response to a question of whether Neymar was worth the incredulous outlay of €220 million, that “When you think of Neymar as a brand, maybe it won’t be so expensive.”

Indeed, Ligue 1 signed a new TV deal during the summer worth €1.15 billion a season, taking it almost level with the Bundesliga’s TV deal, and only significantly dwarfed by the Premier League’s gargantuan €2.3 billion a season. It was an increase of over €385 million from their previous TV deal: the Neymar effect.

As for the man himself, he maintains that “money was never my motivation” or so he told reporters upon landing in Paris following the world record deal. And that was correct: he’s never been about the money, he’s about much more than that. He wanted to step out of the colossal shadows of two fellow Football Gods and create his own legacy, to become the star he was born to be. This was now the Neymar Show. Perhaps that is the reason he’s become more self-obsessed, perhaps that’s why so many don’t like his attitude: but nobody can possibly deny the simple fact that he draws eyes, and by extension, revenue.

Indeed, the effects of the Neymar show were instantly apparent: Paris St. Germain’s merchandise sales increased by 78% following the Brazilian’s arrival, with the imprint of the name “Neymar” seen on over half of all shirts sold.

That’s not to mention the reason he was purchased: to take PSG to another level. His Champions League exertions have been criticised, especially following his side’s defeat in their first game of this campaign against Anfield, and there’s no disputing the fact that if Neymar wants to win the Champions League, he’s going to have to do it as part of a team – one whose front three actually do some defending every now and then.

And yet, during Neymar’s time in Paris, he’s scored 32 goals and contributed 19 assists. In 35 games, spanning Ligue 1 and the Champions League. That is a record as good as anyone on the planet, and better than anyone who’s graced Ligue 1 this century. Of course, while he delivered as expected on the pitch, the baggage that comes with the Brazilian megastar reared its head. The talent arrived in Paris, but so did the ego.

Then came the indulgences; the penalty spat with Edinson Cavani against Lyon that saw PSG ultras boo Neymar, the three-day birthday celebration, the belief that he could show up to training when he wanted. It’s this side – the pretentious, entitled boy who has had the world curated to his every need, that is most despised by traditionalist football pundits and fans alike.

It can be traced all the way back to his upbringing in Brazil: The Guardian’s Ed Aarons cites the story of Neymar’s former club Santos taking the side of their young star over their then manager Dorival Junior, who had barred him from taking a penalty, causing an 18-year old Neymar to throw a tantrum and be suspended by his coach. Twenty-four hours later, the coach was sacked, and Neymar’s suspension was lifted: after all, they had to ensure Neymar would stay; he’d become their greatest single investment in the club’s history.

That is the side of Neymar that is lambasted, the side that expects to be indulged.

But can you blame him?

He lacks a sympathetic backstory, lacks the emotional pull which must exist to charm football’s bourgeoisie, to help enamour them towards South American players. He didn’t grow up on the street, he didn’t have to fight for every touch of the ball. He was raised in the realm of futsal – five-a-side football – where a referee was present to ensure he wouldn’t get the living bits kicked out of him.

He is the product of a country – and continent – which sees diving as an admirable ploy to deceive the referee, when done well. South American football correspondent Tim Vickery claims that because of the way Brazilian football has evolved, “they are used to minimal physical contact being called a foul.” Neymar’s antics evolved from this environment.

There is a complexity to those antics that goes beyond the simple prejudice of “All that play-acting is a bit much.”

Just as there is an irresistible charm in the way he can shape up an opposition player and suddenly go past him in the space of three seconds. There is not a single person who watches Neymar and doesn’t let out an impressed “Ooft” when he dribbles past an opponent. He does that a lot: the most of anyone in Europe’s top five leagues last season, in fact. He exists on a football pitch to put on a show, to entertain, to be extravagant. His mentality is simple: “I’m the best player in the world, and that’s the end of it.” There is something incredibly mesmerising about that.

His story is Shakespearian; of the uncrowned Prince who knows full well he is bound to take the throne when the two imperators of football finally step down. He’s not a likeable character in the eyes of many, some would insist he needs to redeem himself following Russia 2018, and amid all that showboating and extravagance, there will come a need for maturity if he is to become the best player in the world.

That often-maligned immaturity can manifest itself in some magnificent ways, though. Just look at PSG’s game against Nimes: Neymar opened the scoring, then went to celebrate in front of a group of opposition fans who held a banner that read “Neymar is a crybaby.” His celebration? He put two hands to his eyes and pretended to cry, of course.

Following that win, the other side of Neymar came out: a boy rushed to him, wanting the greatest memory he’ll ever have – a moment with his idol. Neymar embraced him, hugged him, spent more time than he needed to with the awestruck little boy, and even gave him his shirt. Then when all was said and done, he carried the boy back to his family in the stand, not letting the stewards get a hold of him. Inside, Neymar is that gleeful kid, yet that was the act of a role model.

A role model so prevalent on the streets of Brazil that he had an advertisement placed on television following the World Cup. It emblemised the concept of Neymar: he admitted that he “sometimes charms the world, sometimes irritates the world.” No matter what he does, though, he is the centre of attention. He is on his path to the throne.

It is a path that constantly affirms what Neymar already knows: the show revolves around him. He is excitement, and modern football loves excitement.

Case in point: Javier Tebas – boss of La Liga – threatened to block the deal to take Neymar to PSG and accused the French club of “financial doping”. La Liga then refused to accept the paperwork submitted to exercise the buyout clause: which lead to PSG going to the source and submitting it to Barcelona’s board, who were obligated to let him go for a release clause they never believed would be activated.

In the 2014 World Cup, teammates wore his name on their t-shirt before their ultimately devastating 7-1 loss to Germany in the semi-finals. The narrative would be thus: Neymar is Brazil’s most important asset; the team should be built around him. He’s now the Captain of his country.

It was Neymar who lead the evisceration of Paris St. Germain during Barcelona’s incredible comeback in the Champions League in 2016/17, scoring twice and assisting once.

It is Neymar, with his thirty-five million Instagram followers, who is a walking highlight reel. It is Neymar who is the most expensive transfer of all time, in a time where transfers are given the gravitas of football matches. It is Neymar who will become the World’s best player when Lionel Messi and Cristiano Ronaldo step down. It is Neymar that embodies all the extravagance of the beautiful game.

And it is Neymar who encapsulates football in the 21st century.