Pep Guardiola is one of the tactical icons of this era and his style has almost been revolutionary. After struggling a bit in his first season with Manchester City, his team have looked unstoppable this year. In this article, I will go in depth about his tactics and why they have been so successful. 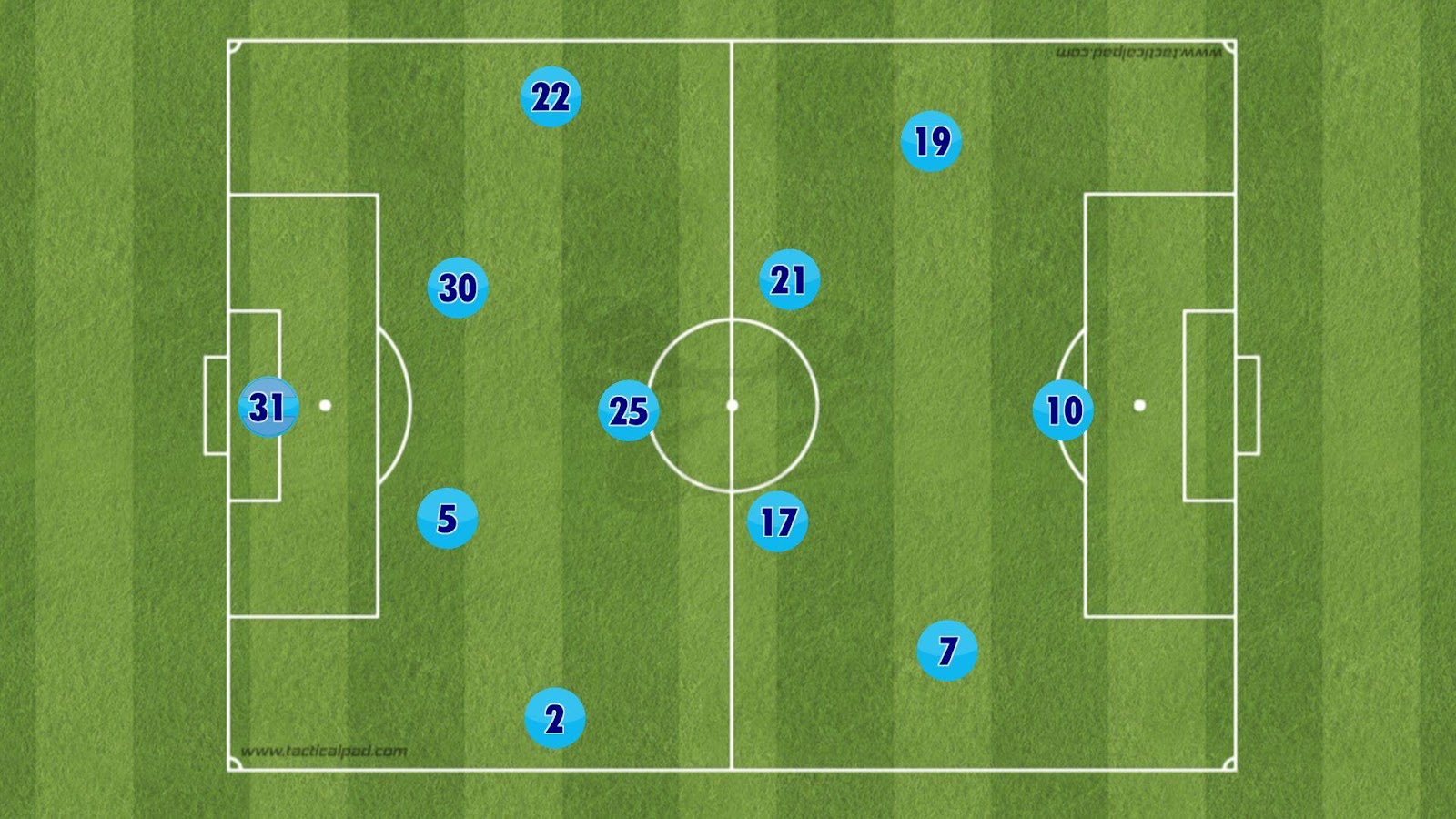 The shape they have used the most so far this season is the 4-3-3. It’s a fluid formation that changes drastically with every phase, and it suits Pep’s “Juego de posición” philosophy perfectly, allowing his teams to dominate possession. The two centre backs must retain composure under pressure, and John Stones and Nicolás Otamendi are both apt at playing out of the back and bypassing the opposition press. Walker and Mendy are two-attack minded full backs who look to bomb down the line and overlap. offering attacking support. Fernandinho is the fulcrum at the heart of midfield, whose importance to the side is often understated: he is vital to the build-up (something that I will discuss in depth later on), and he also acts as a shield in front of the defence, allowing both centre midfielders to push forwards, minimising the risk of opposition counter attacks. His passing ability often goes unnoticed too, as he dictates from the quarterback role, releasing both wingers with pinpoint through balls, and often looking to play the vertical pass even when the passing lanes in midfield are shut.

As for Kevin De Bruyne, he has been converted by Pep into a pseudo box to box player, offering tireless running and helping out with the defensive phase, something that he had rarely done before. He also offers quality in the final third, getting into dangerous positions from deep; the opposition often struggle to track his runs from deep, and this tool has allowed him to flourish into one of the best players in Europe this season. As for David Silva, he is the main playmaker of the team and the focal point. Almost every City attack comes through him, and against deep blocks, he opens up spaces with the quality of his passing. The two wingers are arguably the most vital to Pep’s style of play, flitting between half spaces and confusing the opposition, while sometimes staying wide to offer the vertical option, and sometimes cutting inside to allow the full backs to overlap. As for the striker, whether it’s Agüero or Jesus, they initiate the pressing triggers, instigating the aggressive press that City always deploy. 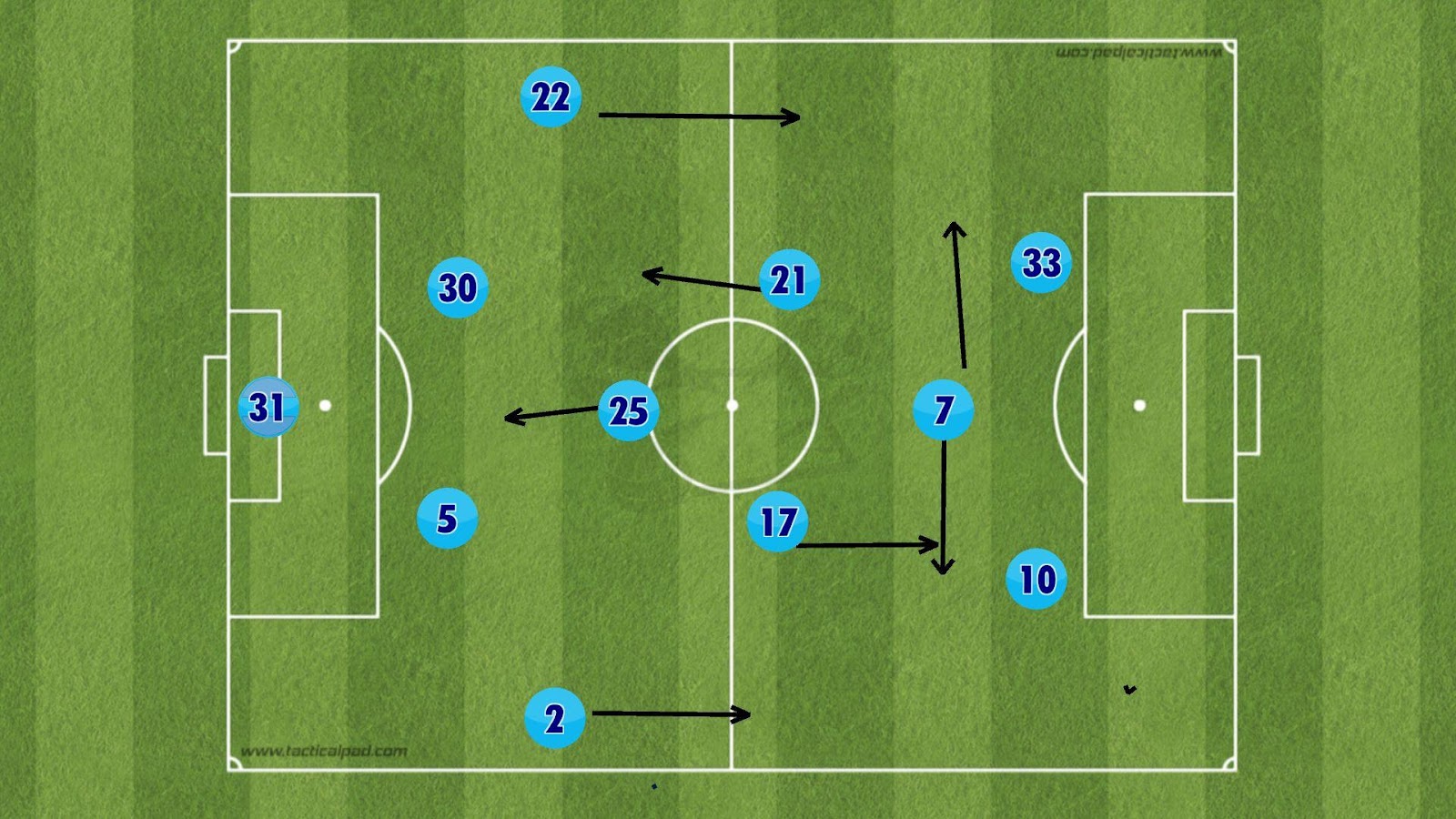 Something Pep has also experimented with is playing with 2 strikers in almost-diamond shape, although this hasn’t been seen as much recently due to Mendy’s injury. It goes to show how vital fullbacks are in this formation and almost justifies Pep’s decision to shell out 150 million on fullbacks. They offer the width in this formation, although the centre midfielders sometimes stray out wide where they create overloads and leave a lot of space for the strikers sometimes, while taking advantage of De Bruyne’s superb crossing ability. Sterling plays in a free role behind the strikers, something which he had previous experience in doing with the Liverpool side who almost won the league. Fernandinho once again acts as the anchor man in a very attacking formation. 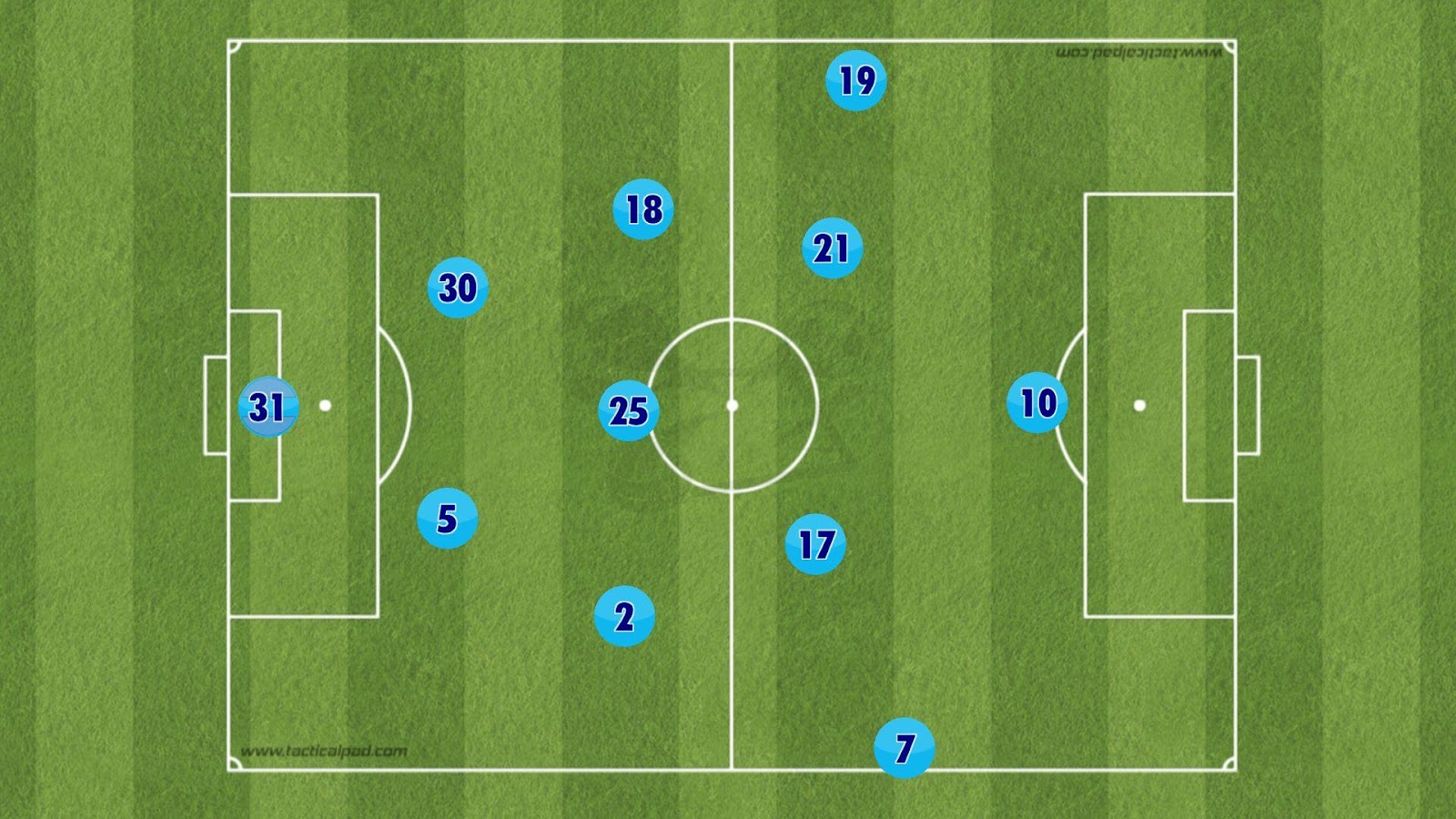 Finally, the inverted full backs system which City used most notably in their 1-0 win against Chelsea. This is almost a 2 3 4 1 shape which is very midfield-oriented and packs out the central half space, allowing City to dominate possession.

Here is an example of the 3 in midfield with the two full backs cutting inside and staying on the same line, Silva moves ahead of Fernandinho and with De Bruyne out wide, allowing City to gain positional superiority and compresses Chelsea in their own half.

The wingers are also vital to this formation as they have to stick wide at all times, pinning the opposition full back down. You can see how central Walker is and how Sterling offers a wide outlet, with the winger finding himself in abundant amount of space. The amount of central players draws the full backs inside and leaves the widest half space almost completely unoccupied. This allows for verticality and width as well as possession. This allows City to mix it up, and engage a two-pronged attack when playing with this system. 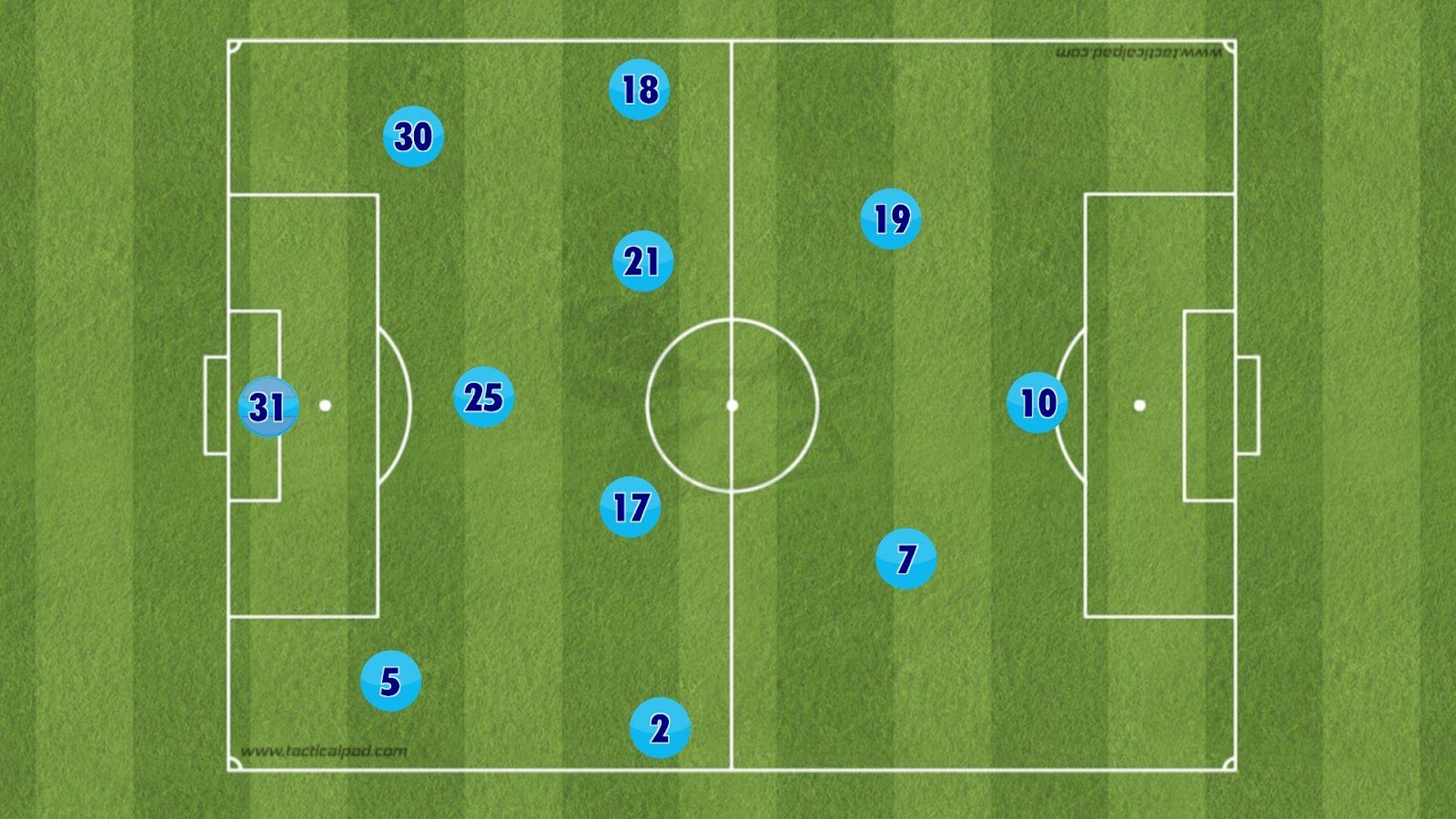 The build up phase of Pep’s City side is very intriguing, with the players aiming to patiently pass it out from the back and bypass the press when they can then move to the attacking phase. The two centre backs split wide, taking the striker/strikers with them and with Fernandinho dropping in between the two forming a back 3. The two full backs push forward to be on the same line as the defenders, and the two wingers cut inside as inside forwards who stick very close to the striker.

Here is an example of this shape. You can see how free Fernandinho is in the half space between City’s defence and midfield, with Arsenal attempting a man-oriented press and trying to nullify the ball carrier. When City break the press line and get the ball to Fernandinho, he has a lot of space and time, and can therefore pick the right option a lot more easily, whether that is a vertical ball to one of the wingers who split as soon as he gets it or a simple pass to one of the playmakers. The City team very rarely go long from the build up phase and even when under immense pressure, they try and play their way out of trouble. This fits in with the possession-oriented approach Pep teams always take. 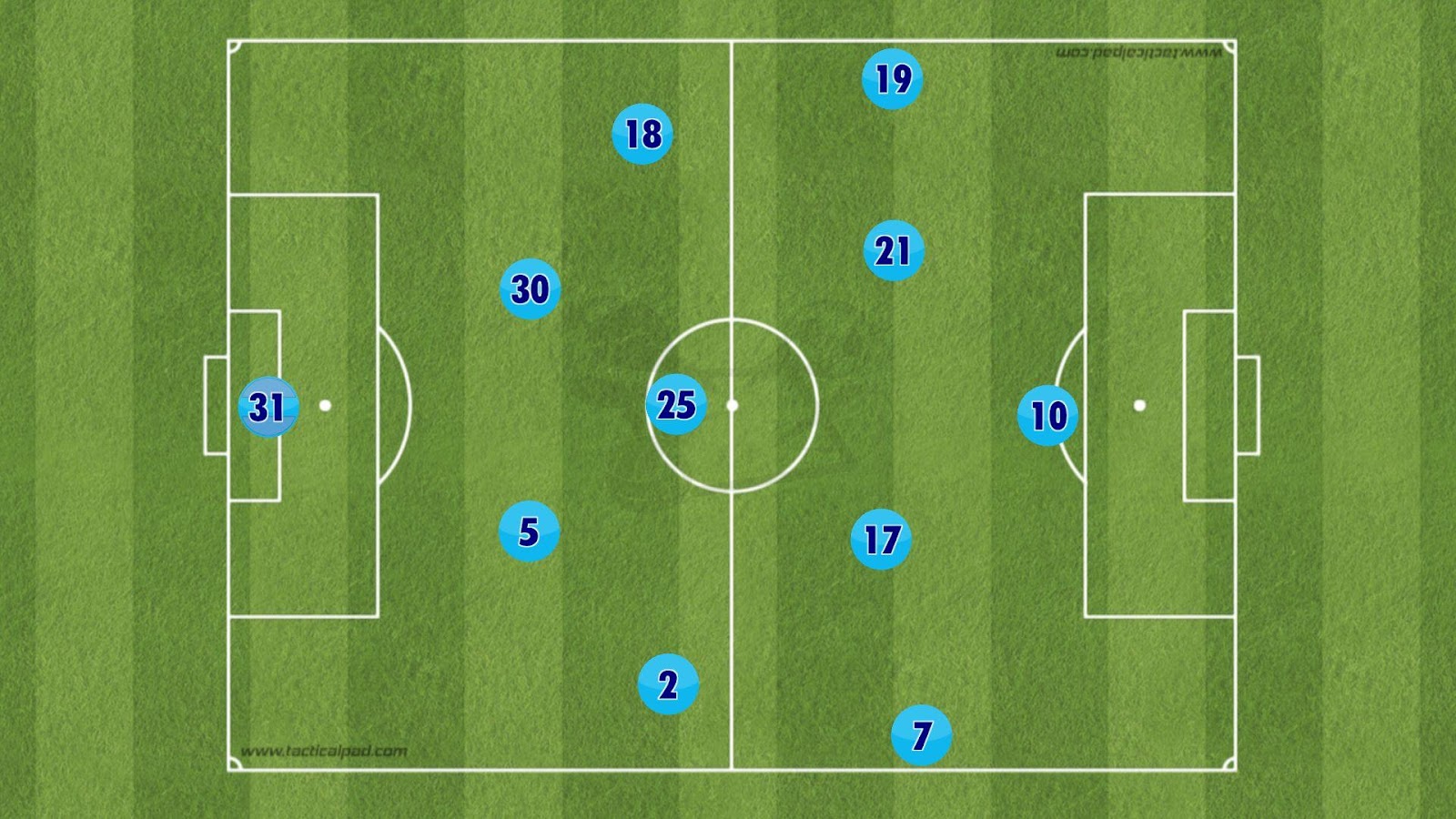 Manchester City have had the strongest attack in the Premier League so far, and they look on course to beat all sorts of goalscoring records before the season ends. Their shape on the ball provides for this plethora of attacking possibilities. The two central midfielders, De Bruyne and Silva push forwards to be on the same line, as the wingers in the half space move between the opposition defence and midfield, which is natural for them as they are both number 10s originally. Fernandinho drops deeper into the space behind the 4 attacking players and the centre backs push very high up the pitch giving a 4 1 4 1 shape. This allows City to compress the opposition in their own half and helps with fluid ball movement as they always possess the extra player in the attacking positions.

You can see how wide Sterling is in the photo and how KDB and Silva advance beyond Jesus. This shows the fluidity of movement between City’s attacking players and how they are able to swiftly interchange positions without giving up their positional superiority. 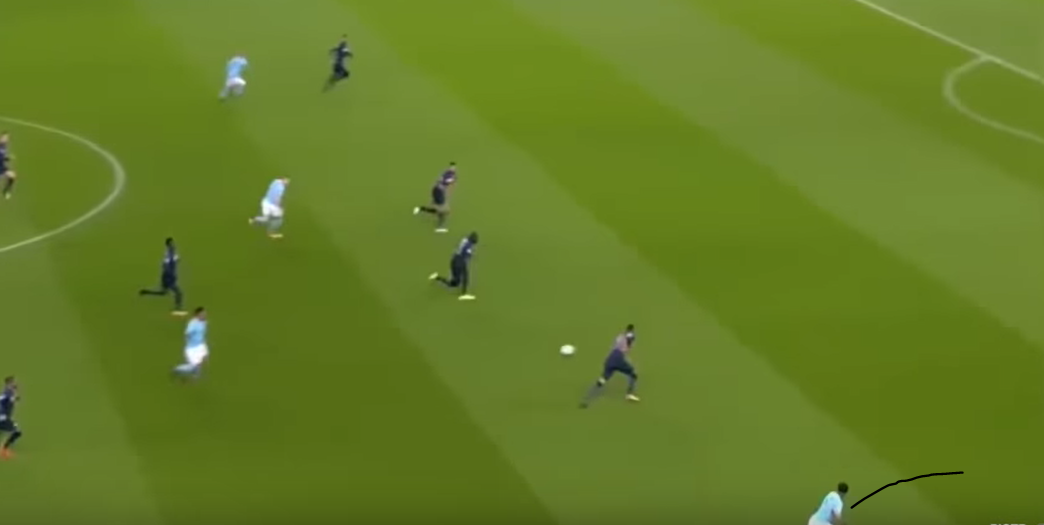 Once again, look at the positioning of Silva and KDB but more importantly, Sané. Both wingers are vital to this system as they offer width and an out ball if things become too congested in the middle of the pitch. That’s why Sterling, a right footed player, plays on the right, and why Sané, a left footed player, plays on the left. They are naturally suited to maintaining the width of the pitch and stretching teams to make space available in the middle. 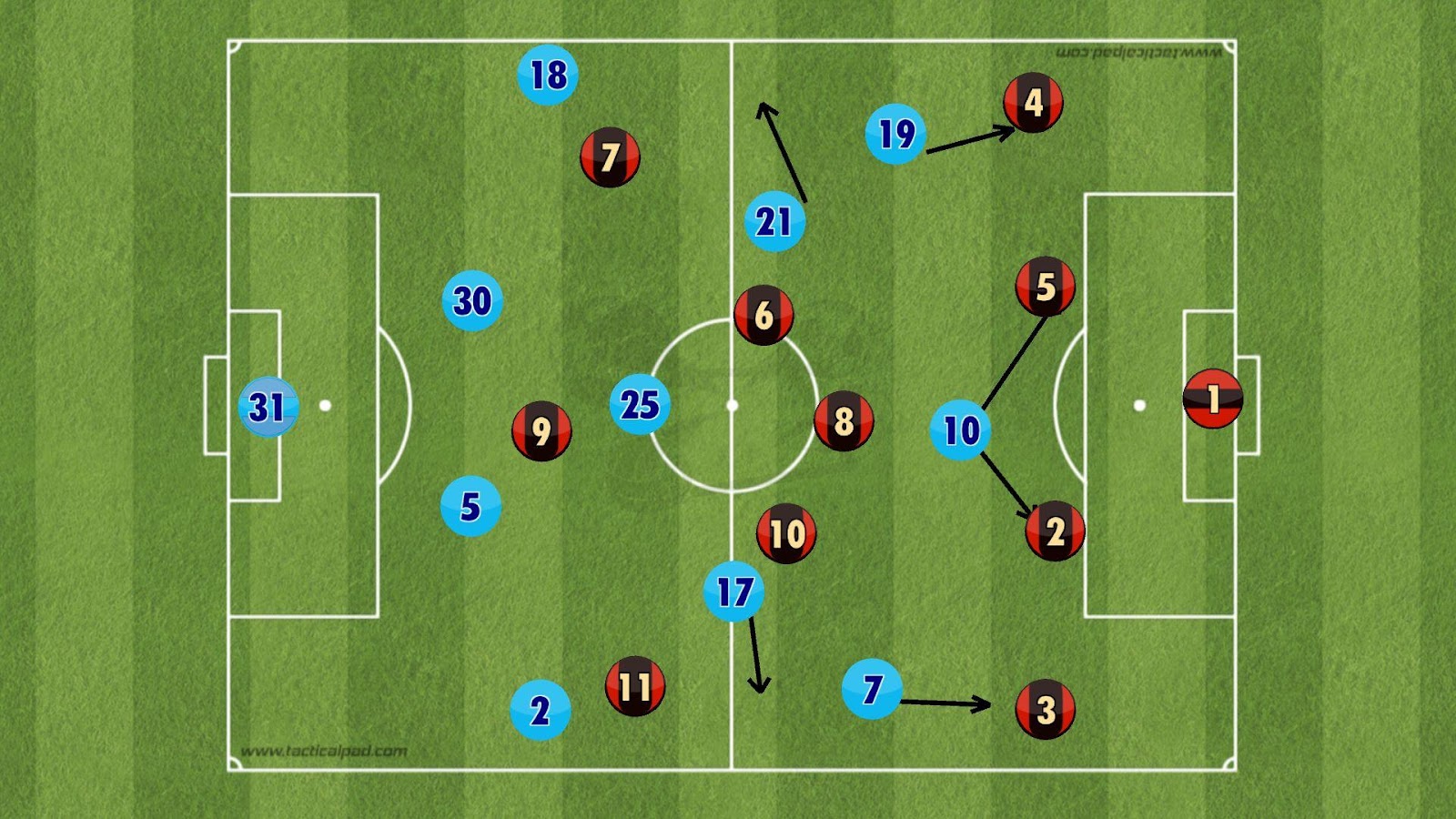 A vital part of City’s style of play is their aggressive pressing. The Sky Blues largely deploy a man-oriented press with the front 3 leading it, and they try and win the ball as high up the pitch as possible and prevent the opposition from entering their half. This press is aided by their very high line which aims to compress the opposition. 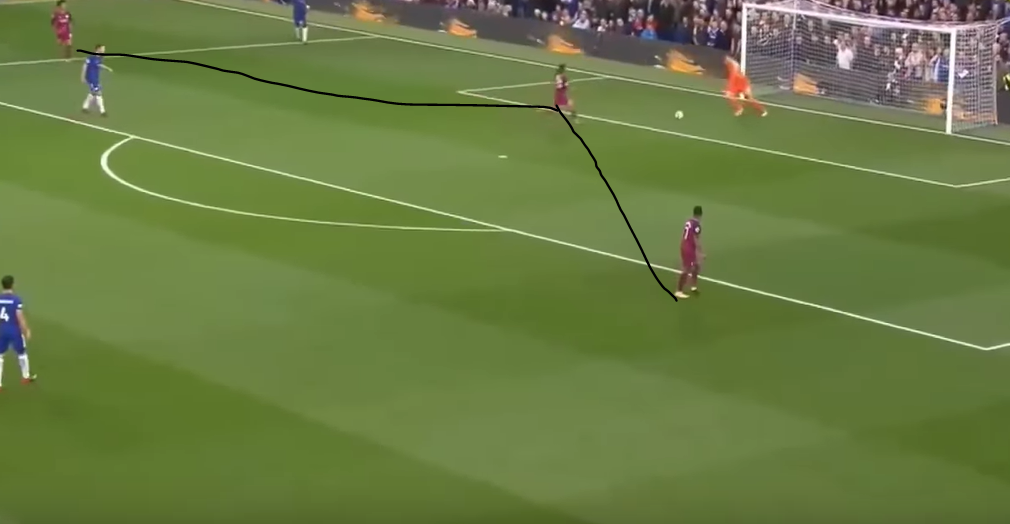 You can see how high the City press is with Jesus pressing the goalkeeper and the two wingers occupying the wide half spaces in between the wider centre back and the full back. Silva and KDB pick up the midfielders in behind and the whole team pushes very high up the pitch. This press is always triggered by the striker who is always the first man to press, and who is usually the most aggressive. 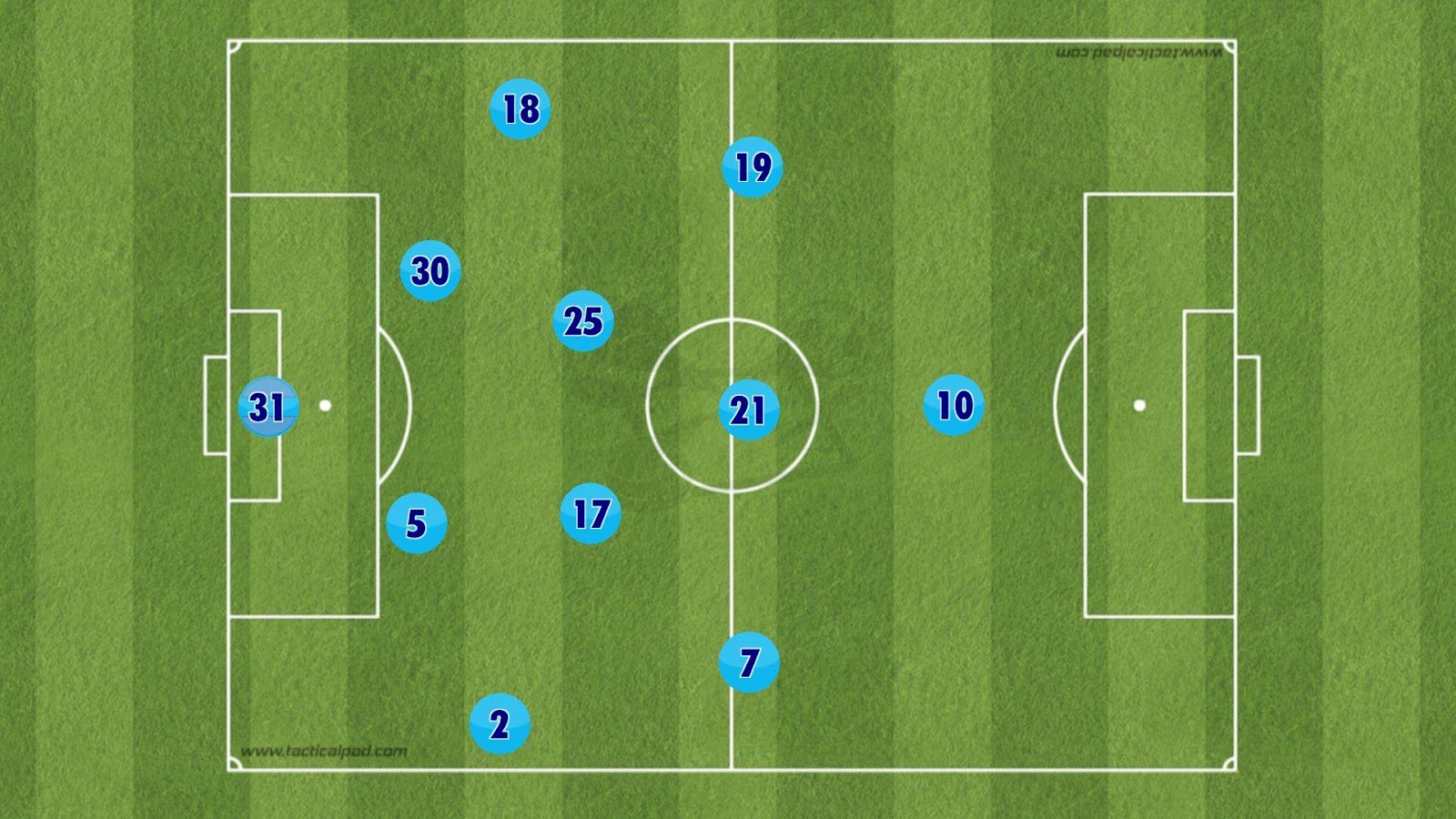 The team switches to a 4 2 3 1 shape if their aggressive high press is bypassed, staying compact against the opposition’s attack. There is very little space between the numerous lines, and this defensive shape is always very quick to transition into the attacking shape when City get the ball, making them so incredibly deadly on the counter attack. It is why they have scored so many goals on the break this season.

Manchester City have been one of the best teams in Europe this season, and this is down to Pep’s tactical ingenuity as well as the players’ abilities. They are a team with many threats who are almost impossible to stop, with so much quality that they can hurt the opposition in every which way.

Their tactical flexibilty is also something that makes them very hard to counter and stop, as I have illustrated; they have the ability to change between many formations, shapes, and styles.

Most people stereotype Pep teams as possession-oriented machines, but they can also mix it up, with the verticality of a Bielsa team, as well as the possession-hungry approach of a Guardiola side, with the two wingers proving vital to their system so far.

This Manchester City finally look like a Pep Guardiola team, and they look almost certain to win something this season while playing attractive and mesmerizing football.