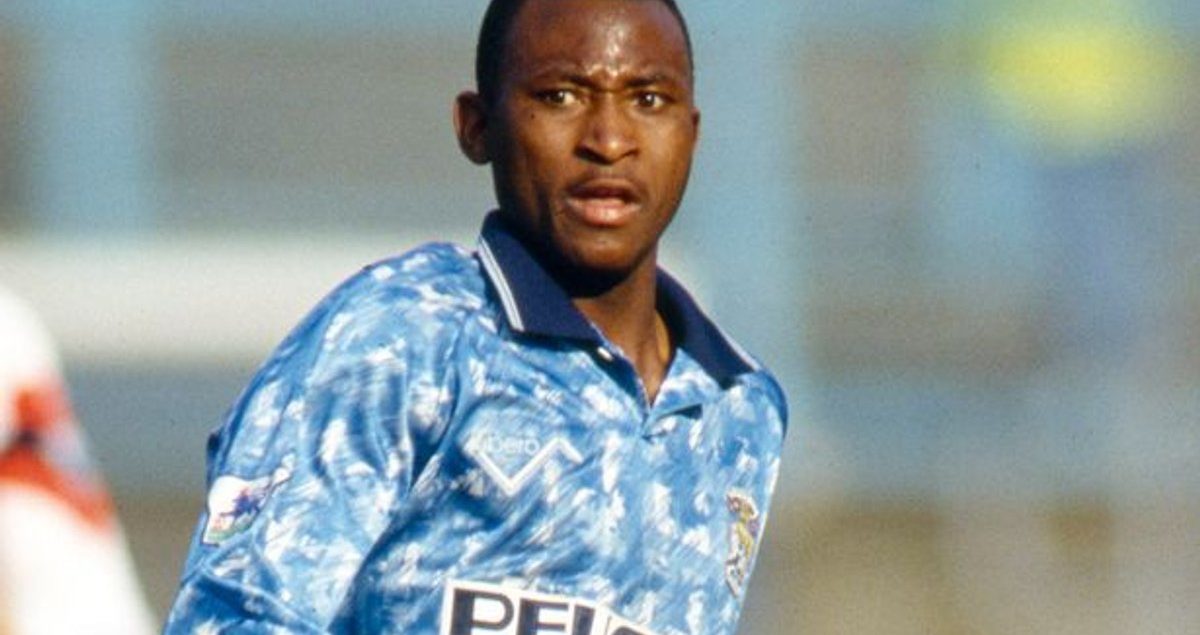 Since launching 27 years ago, the Premier League has been home to a number of world class players from all around the world. Several players from Africa, such as George Weah, Didier Drogba, and Yaya Touré, have graced the pinnacle of English football,  yet the first African player to play in the newly formed top flight was Peter Ndlovu.

Hailing from Bulawayo, Zimbabwe’s second city, at the heart of Matabeleland, the homeland of the isiNdebele people. Ndlovu began his career at boyhood club Highlanders. His career of the Bosso was a fruitful one, and his performances didn’t go unnoticed, as he picked up the Soccer Star of the Year in 1991 and 1992.

FA Cup-winning manager John Sillett spotted the teenage sensation during a pre-season tour in Zimbabwe in 1988, but it was his successor Terry Butcher who signed the Zimbabwean for Coventry City in June 1991. Ndlovu did not have to wait long to make his debut, which came on 21st August 1991, when he became the first African to play in the Premier League. He made an instant impact by scoring away at Arsenal, but he made a name for himself at Highfield Road, after scoring a screamer against Aston Villa in November.

In the inaugural Premier League season, Ndlovu was a key player for the Sky Blues with his performances notably in big games. He scored 7 goals for the Sky Blues, as they finished 15th in the league. The following season was his best, as he was the club’s top scorer with 11 goals. The Sky Blues achieved their best league position in 5 years by finishing 11th, and he became a cult hero amongst the fans, who affectionately referred to him as ‘Nuddy’.

Defenders struggled to deal with his blistering pace, exceptional flair and powerful shots. He had the ability to isolate defenders one on one, dribble past them and leave them helpless before unleashing a powerful shot that left the goalkeeper incapable of saving it. He combined an ability to burst past defenders with an eye for a goal and a physicality that opponents often undervalued.

Ndlovu would go on to leave his mark on the Premier League by scoring even more wonder goals. Specifically, his hat-trick against Liverpool stands out as one of his most important performances in a Coventry shirt ever. Nuddy became the first visiting player to score a hat-trick at Anfield in 33 years, and ended Liverpool’s dream of winning the title that season, as Blackburn Rovers were crowned champions that year.

He made 154 appearances for Coventry, totaling 34 goals and 13 assists between 1992 and 1997. He was sold to rivals Birmingham City in the Championship for £1.5 million, but ended up moving to other Championship sides later. He arrived at Huddersfield Town on loan in December 2000 and joined Sheffield United on a free transfer on February 2001, respectively.

Despite playing in the second tier, he never managed to show the consistency to burst past defenders and score wonder goals like he had done in the Premier League, but he is still fondly remembered by Birmingham City and Sheffield United supporters. Ndlovu left English football in 2004 to return to his home continent to play for South African giants Mamelodi Sundowns.

Back in Zimbabwe, Ndlovu’s impact was phenomenal. He was capped over 100 times and scored 38 goals during his international career. ‘King Peter’ claimed legendary status in 2004 when he captained The Warriors to their first African Cup of Nations appearance in Tunisia in 2004. He remains as Zimbabwe’s greatest player of all time.

Ndlovu may have not won any honours during his time with Coventry City in the Premier League. However, he broke the mould in becoming the first African player in history to play in the Premier League. It was truly a ground-breaking moment, one that paved the way for other Africans such as Jay-Jay Okocha, Michael Essien and Kolo Touré. Many of these players have managed to turn themselves into cult heroes through stellar performances for their respective clubs, and this decade has seen the likes of Riyad Mahrez and Sadio Mané burst onto the scene. The Premier League’s African stars of today owe a great deal of gratitude to Ndlovu, a trailblazer for today’s footballers.