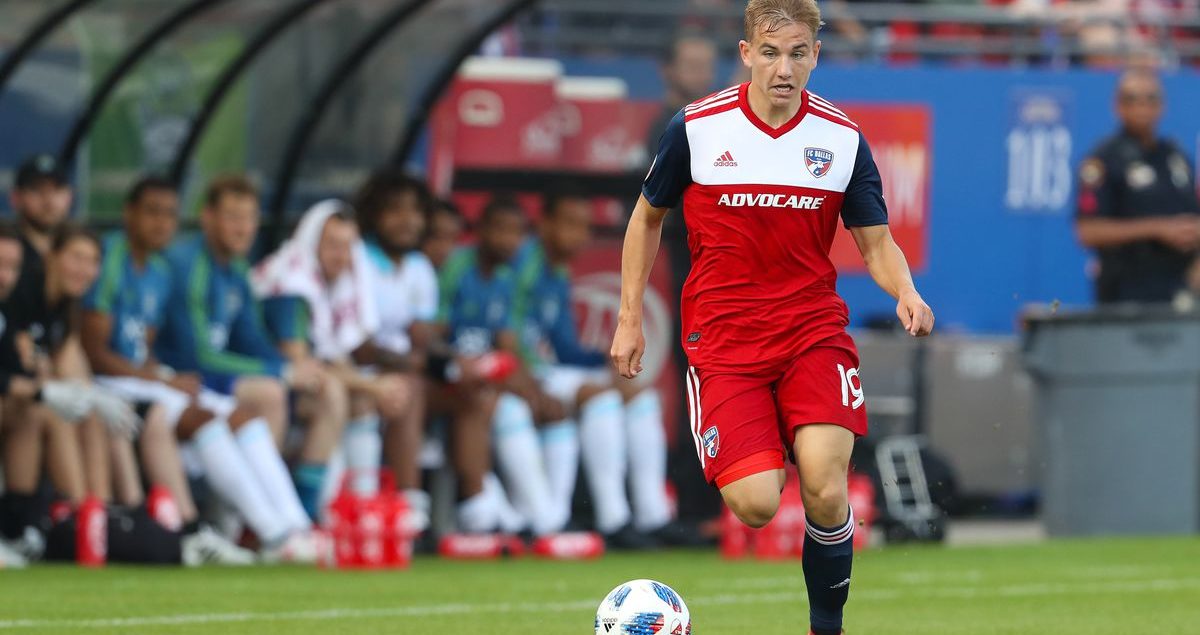 Paxton Pomykal. Heralded as the “American Frenkie de Jong”, Pomykal is a special talent for FC Dallas and the United States. As almost every major team in Europe makes the shift to attacking, possession-based football, Pomykal is the poster boy for the continuation of the trend on American soil.

One of Pomykal’s best talents is his excellent ability to break the opponents lines. He accomplishes this by dribbling close to an opposition player. This dribbling creates a 1v1 and, additionally, attracts some of the other players. This is due to the principle that more time on the ball attracts opposition players. Here we see that Pomykal (shown in yellow)  is situated himself in a 2v1. This is clearly a numerical superiority against Pomykal. However he uses this to make a threading pass to one of this teammates. With this pass (shown in pink), he has eliminated two forwards (shown in red). Moreover, the teammate with the ball can now advance into space (shown in purple).

After that, Pomykal looks for a diagonal pass to the forward line. Pomykal chooses this pass as a diagonal pass shifts the opponent in the forward and the lateral direction. These two changes can cause the creation of spaces in and between the lines.

From here, the attackers of team have found themselves in a situation which has numerical superiority in favour of them. They can then use this space to attack the defence straight. Here we see that Pomykal’s body posture is open which makes it seem that he’ll make a sideways pass ( as shown in yellow). This body posture causes the opposition team to move in that direction as well. This movement (shown in white) creates holes and ultimately provides a free passing lane to one of the attackers (shown in red). With one pass, Pomykal eliminates the entire midfield block.

Another one of Pomykal’s abilities is his close touch and control. As such, this ability becomes indispensable to the team in attacking scenarios. Pomykal often occupies the half-spaces, spaces that are critical for making dangerous assists and crosses.

The opposition team knows the importance of his presence in the half-space and as such, devotes many players around him. As many as five players have come to surround Pomykal. He acknowledges this attraction and uses it to benefit the team.

His ability to command the ball in an excellent fashion makes Pomykal press-resistant. As such, Pomykal is often used in the attack as a buffer in the attacking progress of the team. He will hold up the ball and beat man to man presses or zonal pressing. This type of pressing shifts the formation of the opposition allowing for spaces that can be taken advantage by the team.

In addition to being excellent on the ball, Pomykal is also highly energetic. This translates well into the team’s buildup and pressing actions. Pomykal’s energy is used by the team in its pressing actions as he often makes early, curved runs on opposition players. Not only does this cut the opposition player from passing backwards, it also increases the probability of the team winning a possession. This is as the opposition player can only pass in one certain direction. Since Pomykal’s team is also pressing, this means that the ball was likely to be intercepted by Pomykal’s teammates.

This energy from Pomykal also aids in the team’s buildup. He does this by positioning himself in the central corridor. As such, when the centre-backs separate, Pomykal functions as an outlet for the centre backs to find the ball.

Pomykal will also come, so deep, as be part of the defence. This allows Pomykal to directly participate in the buildup. Combining his penchant for disguise passes, Pomykal’s presence can help get past a block of opposition players.

Pomykal also involves himself in the buildup action in other ways. For example, when the team is building through the goalkeeper, Pomykal often situates himself in the half-space of the buildup. This allows him to pass back to a deeper centre back. From there the centre back can pass to a fullback who can pass centrally to Pomykal. Pomykal can then use his excellent passing skills to pass to a nearby winger or straight to the striker. The final skillset for Pomykal is his dribbling abilities. His talent for gliding past opponents is critical for the team. His excellent dribbling abilities are able to aid the team in buildup as he can glide past the opposition press.

Additionally, this dribbling ability is helpful for the team when they are attacking as Pomykal can suddenly stop and accelerate. This ability attracts opponents which gives him the power to release his free teammates on the wing or on the central corridor.

One can undoubtedly say that Paxton Pomykal is a huge talent and an asset for any team he plays in. His versatility with positions and excellence in front of the ball makes him an ideal candidate for a midfielder for any possession based team. As such, Pomykal is the future of the U.S. and it is must be no doubt that big pressures lay on the kid.