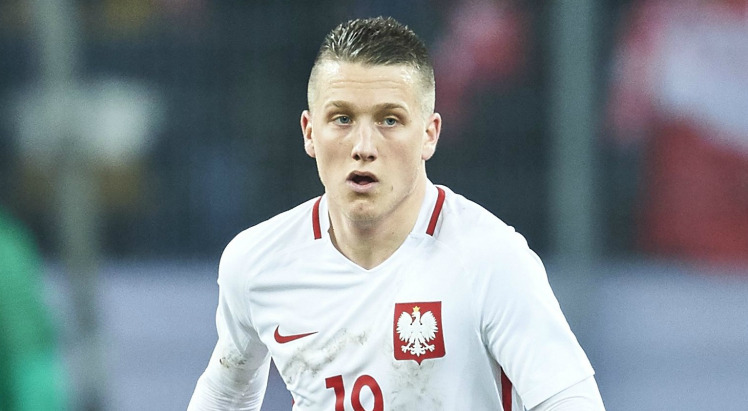 From playing on Empoli to being a shoo-in to start agains the defending European Champions, Piotr Sebastian Zielinski has undergone a lot of progress over the past year. The Polish midfield virtuoso was born in the small Polish town of Zabkowice Slaskie. With an area of 13.67 square miles and a population of 15,000 people, there were not many options except playing in the local football club. Under the management of his father, this was the place where Piotr took his first steps at a football pitch. In 2007, 13-year old Piotr Zielinski began to grow apart, both from the team and the town. Polish and foreign clubs wanted his signature on a paper and the young boy ended up in the Polish city Lubin, just 2 hours drive from his home town. His new club was the Ekstraklasa club, Zagliebe Lubin. Zielinski’s talent was impossible to miss and he went through the different youth ranks in a way that no one in Lubin had witnessed before. As a 15-year old he started to appear regularly at the first team trainings. Piotr, his parents and the first team coach at the time, the meritorious Francizsek Smuda, made an agreement that it would be best for his development to practice once a week with the big boys in the first team.

Zielinski’s youth team were one of the best in Poland and competed at international level. Soon, the international caps at youth level for Poland became a fact and since his debut in the Polish U-15 team he has gone through every single national side. During an international youth tournament Udinese spotted the young Pole and it did not take long until he was at a flight down to Udine. As a 17-year old he put his signature on a paper and signed for the north Italian club Udinese. Eighteen months later, in November 2012, an 18-year old Piotr Zielinski introduced himself to the Italian football audience when he replaced the legendary striker Antonio Di Natale in stoppage time against Cagliari.

“I remember the times with Piotr in Lubin. He stood out. I urged him to practice with the first team once a week, every Tuesday. I will tell you this: expect something special from Piotr, it has always been obvious that he is talented. He is that kind of player who want to be educated, he loves football,” said Francizsek Smuda after Zielinski’s first appearance in Serie A.

In total it stayed at 9 appearances for Zielinski during his first season. The second season did not quite proceed as expected, with 10 appearances he was sent out on loan to Tuscany and the newcomer Empoli. But the struggle to adapt to senior football continued and despite his 28 appearances, only 8 came as a starter. But his second season in Empoli changed everything; he became key for Marco Giampaolo’s team and started 35 of the 38 games in the league. Empoli stayed up once again and Zielinski finished the season with 5 goals and 6 assists, not extraordinary but yet he was one of the most important players in attack. His 2.5 completed dribbles per game was the fifth best number in the league. Also, his 1.5 key passes per game puts him fairly high in the ranks. The same number as a creative player like Paul Pogba.

The interest for the 22-year old was high and many big European clubs approached him. Liverpool, Milan and Napoli was rumoured as the most likely destinations. In the end, he chose Napoli. The fee was reported as 10 million euros.

The tough competition at the midfield in Napoli has made it hard for Zielinski to gain a regular spot in the starting eleven, but that was probably not expected from anyone either. But 29 appearances in all competitions where of 22 in Serie A and 12 starts is still good numbers. Two goals and six assists is his tally in the league, he as also scored one in the cup. His six assists puts him as number sixth in terms of assist despite him playing a lot less than his competition.

The role of Zielinski + statistics (In this part we will use numbers per 90 minutes since he has a lot of games as a sub.)

Under the management of Sarri, Zielinski has mainly played as the right of the three central midfielders, always accompanied by a defensive anchor, either by Jorginho or Diawara. Marek Hamsik is often the left of the three midfielders. Hamsik is the obvious star in the midfield; there is no doubt about that since he has been one of Europe’s best midfield players this season. However this has not placed Zielinski in some kind of Hamsik shadow, the other way around, he has showed himself from his best side. Zielinski got his strengths in his creativity, vision and his ability to advance in to the penalty area from his midfield position and create danger for the opponents, either through killing the attack himself or serve a teammate in a better position, kind of like Marek Hamsik.

It is not easy to highlight any obvious flaws in the game of Piotr Zielinski. He handles the game in both directions very well, his defensive skills has been improved with Sarri. His work rate is good and he suits perfectly as a box-to-box player in the system of Sarri. His defensive numbers could still be better. I would like to see more interceptions and a more aggressive style of play overall, that would turn him in to the perfect box-to-box player. His finish can be improved as well.

Zielinski fits in different positions; he has been used both as a winger and a classic number ten. He is very flexible and versatile in that way. But the majority of his time in Italy has been at the central midfield with key tasks both in attack and defence, which is also where I see his future. Especially at the position he has now with Sarri, one of two interiors.

With the special talent Piotr Zielinski possesses it is not strange that the some of the biggest clubs in Europe wants him. Just in the recent days has it been talks about the likes of Chelsea, Liverpool and Real Madrid. But Piotr is not in a hurry; there are worse places to be than under the wings of Maurizio Sarri.