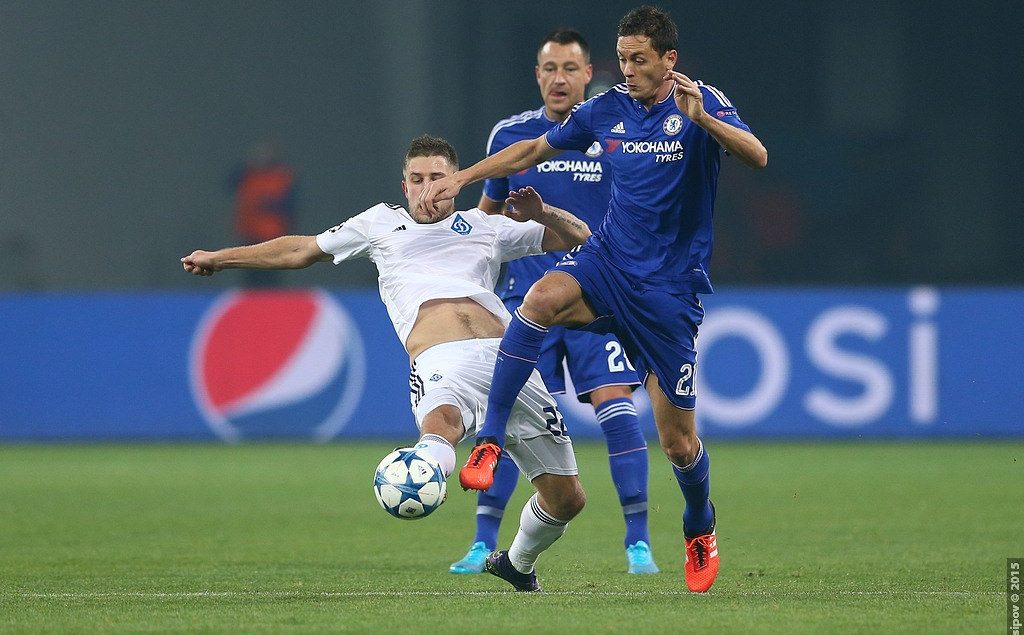 Background
Nemanja Matic. A player that draws out many different opinions from within the football world, the Serbian has come a long way since making his first team debut for 3rd division Serbian side Kolubara Lazarevec at the age of 16. Matic stayed on as a squad player, amassing 16 appearances in three seasons. The club rose through the leagues and Matic’s steady performances in his last season at Kolubara in Serbia’s 2nd tier earned him a move to Slovak top division side MFK Košice where he continued his promising performances and impressed in the Slovak cup final which earned his team a berth in the new edition of the UEFA Cup, the Europa League. These performances led to trials at PL clubs such as Middlesborough, with bigger clubs like Tottenham and Chelsea keeping close tabs.
Chelsea decided to buy the young Serbian. In August 2009, Matic became a blue. When Nemanja Matic initially arrived at the Bridge the Serbian was seen as a player that could impact the game further up the pitch, drawing early comparisons as a young Michael Ballack, who was also at the club at the time of his arrival. Given the number 24, Matic featured regularly for the reserves, only managing to make two appearances for the first team. This led to him being loaned out to Vitesse the following season where he impressed, but was ultimately used as a bargaining chip in the David Luiz deal in 2011.
Time at Benfica – The Transformation Occurs
After a long loan spell at Vitesse, Matic joined Benfica, in a deal that saw highly coveted young CB David Luiz go for a fee of 21 million to the Kings Road, and Matic now joining forces with Jorge Jesus in Lisbon. At this time, Matic was almost at a crossroads with his career, a young player who looked to be ultimately going through the same loop that a lot of old Chelsea prospects had gone through; never ending loan spells, and no true home to settle down. However, with the help of Jorge Jesus, Matic would find a true role model, a person akin to a mad scientist who had just found Frankenstein, a player whose skillset had never been used to perfection.
This great transformation would come in the role of converting Matic into a full defensive midfielder. In an interview with Matt Law in the Guardian, Matic said that when he first moved to Benfica, “I played like a No 10 in the team”. This meant that transformation from playmaker to destroyer was one that would have to be developed. Matic stated as well that Jesus told him to watch videos of Javi Garcia, a player who would go on to move to Manchester City. He stated that Jorge put a lot of emphasis on the way players moved, and the tactical/physical work involved in playing the position. However, Matic states that it was never an easy transformation but Jorge belief in his quality was the main decisive factor. “It wasn’t easy at the start because I never played that position. In the start, I never played so well”. As a result of this belief, Jesus would transform Matic into one of the most sought-after midfielders in Europe. Due to his natural ability to have played 10 before, the transformation allowed for Matic physical attributes and technical to converge together to create an incredible dominant presence. The sheer length that he possesses meant he could win tackles and interceptions with ease, the tall aerial ability meant he could also anchor the midfield and still dominate if a team went vertical.
Also, with his already established experience as a No 10, meant he could dazzle with his ball carrying ability and elegance on the ball when needed. It was very comparable to legendary Real Madrid midfielder, Fernando Redondo, a player with a great technical grasp on the game despite his size and length. For instance, his Puskas nominated goal was small microcosm into the player he was becoming. Thus, this convergence, spearheaded by Jesus, ultimately led Matic to win Primer Liga Player of The Year in 12/13 and leading Benfica to a Europa League Final against a club that would end up resigning the monster they never knew they had; Chelsea.

Return to CFC – The Dominant Midfielder
In the 15th January 2014, Chelsea opted to resign the now highly touted Matic for a fee of 21 million, just 3 years after letting him go. It seemed for then manager at the time Jose Mourinho that the midfield pairing was too destabilised, and that a real anchor was needed to both protect the defence and play progressive passes. This was because despite the vast wealth of attacking options in the form of Oscar/Hazard/Willian, the midfield pairing still hadn’t been sorted. Both Mikel/Ramires/Lampard and even CB Luiz had been used in the pairing but the continuity wasn’t there. Chelsea lacked the aerial threat they had before in players like Michael Ballack, a midfield enforcer who could control games on both ends of the pitch and had that extra ability to be a dominating enforcer. Thus, the Matic signing was the first move that Mourinho would create to form the edge of a title winning spine that would come later on.
However, with this being said, in Matic first BPL start, he made his name known that this dominating presence was here to stay. The Etihad had been the toughest away ground in the league at the time, a place that had endured a long unbeaten streak and was home to the league’s best and most dominating midfield player, Yaya Toure. This left Matic coming into the deep end, who would win this goliath battle? Matic, could not have answered this more poignantly where he produced a MOTM display in which he bullied the helpless Toure into submission with his length and size. Toure had not encountered such a mismatch, a player who could beat his dribbling and could also tackle him with further ease. Both pundits Gary Neville and Jamie Carragher were equally impressed with the performance, with Carragher duly noting his crisp passing, his ability to start counter attacks and play off the dribble was not seen by a player of his height, Toure aside. He ended up having a stat line that read, 85% pass completion, 9 clearances, 2 interceptions, and 4 tackles.
With such a fantastic display on his debut, the performances just kept coming in, with Chelsea winning 5 of the next 6 games as soon as Matic became a mainstay in the side, with his impact being duly noted. While Chelsea went on to end up losing the 13/14 title due to their inability to break down deep blocks, it looked as if Matic was now going to become the centrepiece of the midfield for the next season, where with the addition of Fabregas and Diego Costa, would end up forming a dominating presence in English Football.

Resurgence – The Convergence Occurs
With a new era seeming to start at Stamford Bridge, Matic was seen as a cause of doubt for many fans. Could he ever rediscover the form of the early remnants of the Mourinho era? Or was he another disposable player, one that could be dispatched quickly to turn a new leaf. At first glance, it was looking to be the latter, with Juventus showing a very solid interest and the likes of Radja Nainggolan being linked to possibly replace him. However, new manager Antonio Conte was adamant that Matic was not for sale, and was a key part of his plans for the upcoming season.
One of the early signs that would end up fulfilling Matic resurgence was the signing of N Golo Kante. With this, Matic would not be left as exposed on the defensive end, as due to Kante being an ultra-aggressive player who could press from the front and recover second balls amazingly, Matic could be a perfect complimentary player to Kante, someone who would win the aerial threat and be a potential creative difference maker. While Kante would struggle to early on as a deep player due to the space being much bigger, Matic was slowly but surely, playing higher up in Conte midfield 3. For instance, while the overall display was poor, Matic second half performance against a rampant Liverpool side, showed his ability to make the difference in the final third despite his lack of pace. Being able to carry the ball and being an incisive passer allowed him to assist Diego Costa during that game, a theme which would carry on.
With Conte now switching to the 343 formation, and Kante, now with David Luiz and more protected passing options, very much allowed for Matic creativity to flourish. While it must be said that Matic is not at the creativity ability of someone like a Cesc Fabregas, the convergence of Matic physical attributes along with his creativity, allowed him to be a more secure defensive player alongside Kante despite his previous struggles. Thus, over the next couple of games, the Matic/Kante partnership would flourish against every matchup. Matic ability to create from deep and be that sort of both deep-lying playmaker and creative threat as a B2B meant he notched up a career high of 6 assists by November. This was best seen in instances where he linked up with star attacker Eden Hazard in the half space during the Manchester Utd game, or with Pedro in the Spurs game. That elegant quick ball between the lines allowed for Chelsea to provide a killer difference, linking both midfield and attack. Thus, while we have seen that Matic was before, the flawed destroyer who would cover for Cesc, he was now the becoming a complete technical version of the player he was initial formed as. He is now more complex, a mere unicorn of a player who can matchup and provide the difference amongst any player in the BPL. Thus, with Matic every improving form, Chelsea are now top of the table, with a historic 13-win streak. The player who was gone through every transformation, who has been misinterpreted by the media at times, now seems to be fully settled in his role.