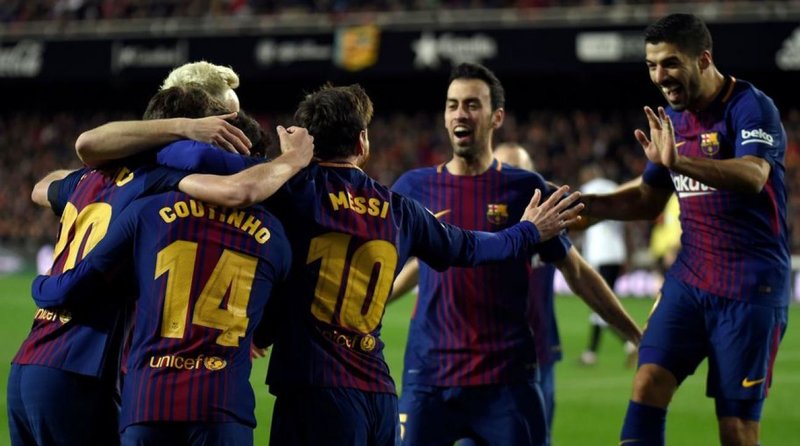 Well, THIS is weird.

It wasn’t that long ago that gloom and misery stalked the halls of Culerville after the second-best player in the game scuttled to Paris, in search of more sun than shadow.

His ostensible replacement broke while doing, of all things, a backheel, and needed surgery.

A dour man nicknamed The Ant was tasked with building something, and his team won. And went to Champions League and won some more. Now, remarkably, Barça is considered one of the Champions League favorites. To cite the Grateful Dead, it’s been a long, strange trip.

When Barça drew Chelsea as its round-of-16 opponent, Conte’s team was in a clunky vein of form, dropping points when it shouldn’t and looking nothing like defending Premiership champions. But now, in form, Chelsea is a formidable opponent — particularly with the addition of Olivier Giroud from Arsenal — that will be a handful for Barça for a great many reasons.

— Form. A team goes through cycles over the course of a season, as part of peaking and training as it balances the various demands. After an extended stretch of a match every few days, Barça is in something of a trough. This has been brewing for a while, but manifested itself most clearly in the weekend’s desultory draw against Getafe, when a heavy-legged attack made it easy for defenders. With an intricate attack such as Barça’s that is predicated on movement both on and off the ball, tired legs means that nothing happens — except dribbles and crosses to nowhere, and scoreless draws.

— Structure. Barça needs wing play. Without that, the system doesn’t work, can’t work. Suarez is isolated and Messi is making Quixotic runs at banks of defenders. Love or hate Neymar, he brought wing play in spades. This shortcoming is a real problem, given the strength of Chelsea at CB and in goal (Courtois is a beast) when a team runs directly at them.

There is lots of talk about Messi being the difference maker. He is, but he can’t do it by himself. In comments before this week’s matches, Manchester City coach Pep Guardiola said that Barça is the favorite, because they have Messi. He is blowing smoke, trying to distract attention from his team, which is playing the best and most effective football in Europe right now.

During the team’s recent run of sparkling form, Messi was the topping on a maelstrom cake. Suarez was back, Alba was lethal from the left and Sergi Roberto was making intelligent runs. Opponents were also playing more open. What is happening now is that opponents are packing it back in league, playing for a point and the 0-0, vaguely hoping for a goal off the counter. Absent wing play, Barça has no answer for that, which makes this Chelsea tie rather difficult and ill-timed.

A month ago, Barça walks this tie. Now, Valverde will have a significant coaching job on his hands. Defensively, Pedro will make incisive, effortful runs at the defense, and won’t stop. Hazard will make the same kinds of crazy, mazy dribbles that Messi and Iniesta make in driving defenses bonkers. Giroud gives them a target man who is capable of smooth linkup play as well as the stunning finish.

— Personnel. The reason that the Coutinho transfer needed to happen in January was so that Iniesta could rest in league while Coutinho did Iniesta stuff. Yet against Getafe, Iniesta was still needed to do Iniesta stuff. That’s bad. Dembele set himself back with the new injury, so he entered as a sub against Getafe, and a rather ineffective one at that. It would be a lot better if he was fit and integrated into the side, as the kind of player capable of disrupting the Chelsea defensive structure. Messi will be Messi. Suarez will be key. The threat of elimination is quite real, even as some culers are brimming with confidence.

If Barça advances against Chelsea, they will win Champions League. The team will never be as weak as it is right now. The tools are there: possession, a key player in fine form in Iniesta, and Messi will be Messi. The back line is excellent, with an in-form Pique, and the best CB in Europe in Samuel Umtiti. Alba has been having a brilliant season, and Rakitic has found exceptional form as a migratory Busquets. Ter Stegen is the best keeper in Europe. Barça doesn’t give up silly goals as it did last season, which will keep the tie within reach against any opponent.

Scoring is the principal difficulty for Barça, as it has always been in recent history when the team hasn’t won trophies. It is a team that is more susceptible to low blocks because of the logic and ball movement of its attacking. If the ball doesn’t move quickly enough, Barça won’t score. But opponents don’t affect that ball movement — the team itself does. And if that team does what it is supposed to do, the rest will fall into place.