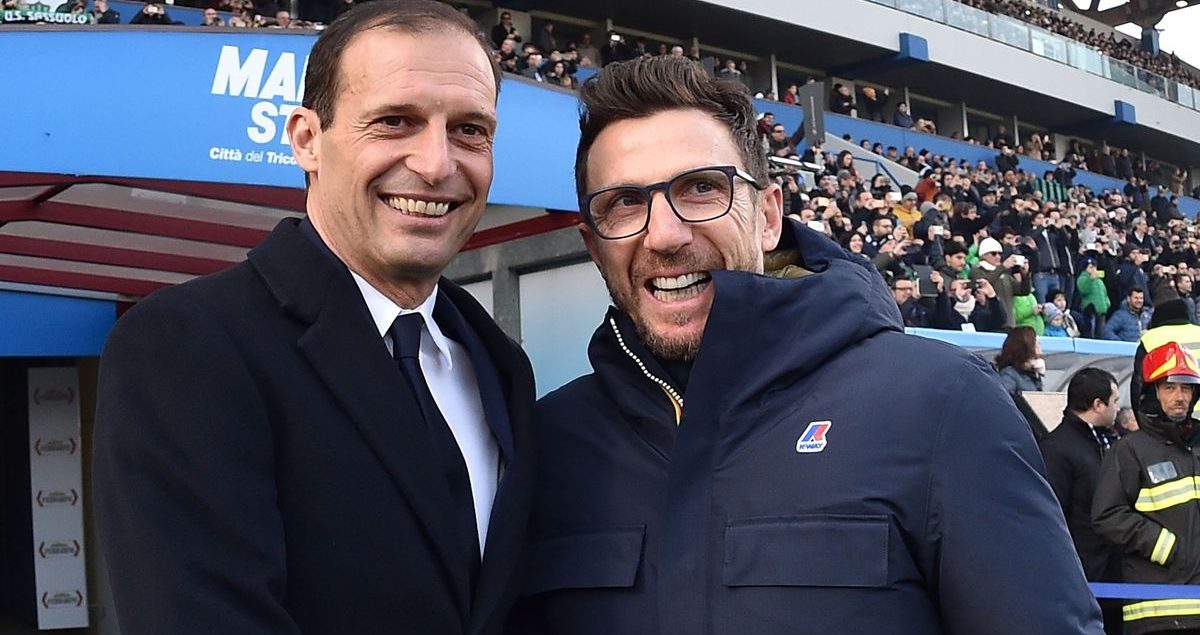 Located in the northern region of Emilia-Romagna, Sassuolo is a town that does not necessarily lure the attention of tourists or possess the historical significance that most of its Italian counterparts do.

Situated about 16 kilometres away from Modena, Sassuolo is known in Italy for being an industrial town, especially for the production of ceramic tiles, but recently it has gained more attention around the world for its football team.

The Neroverdi, or black and greens, made their Serie A debut in the 2013/14 season, but it took the club considerable time to rise up the ranks of Italian football. It has become known for developing young Italian talents, with the likes of Lorenzo Pellegrini and Stefano Sensi breaking through and eventually earning international call-ups. However, more than just players, Sassuolo has become a place for young coaches to develop their reputations and gain experience, before moving on to the top level.

Current tactician Roberto De Zerbi is the latest to earn plaudits while coaching Sassuolo, but the likes of Massimiliano Allegri, Stefano Pioli, and Eusebio Di Francesco also found their footing as coaches during their time in Emilia-Romagna.

Giorgio Squinzi has been the owner of the club since 2003, a year after his adhesives and sealants company Mapei became the club’s official sponsor. The 75-year-old seems to have a preference for coaches that have attacking philosophies, and as De Zerbi found out on arrival, he likes to have a scope on how his coaches want the team to play.

“I became aware of the great passion of the owner Squinzi,” De Zerbi said in his first press conference as Neroverdi coach in July.

“He loves football, he looks to inform himself and to understand what the tactical strategies and the idea of ​​the play are.”

De Zerbi was a journeyman midfielder as a footballer, and he began his coaching career in the 2013/14 season with Serie D club Darfo Boario, which resulted in relegation to the Eccellenza.

Surprisingly, this did not deter his former club Foggia from hiring him for his first job as a professional coach, and he had two impressive seasons there, earning comparisons with Pep Guardiola for his style of coaching. After finishing seventh in the 2014/15 Lega Pro season, the Satanelli won the Coppa Italia Lega Pro in the following campaign and finished second in the league, before losing to Pisa in the play-offs.

This caught the eye of Palermo after they sacked Davide Ballardini in the early stages of the 2016/17 season, but De Zerbi was not yet ready for the jump from Lega Pro to Serie A, and he managed just 12 league games before facing the axe from trigger-happy president Maurizio Zamparini.

He got another opportunity to coach in Serie A the following season, after Benevento, having lost 10 out of 10 matches under Marco Baroni, appointed him as manager. Despite not being able to rescue I Stregoni from the bottom of the table, De Zerbi gained praise for his possession-based style of football with a squad clearly not up to the standards of Serie A.

This appealed to Sassuolo, who, after battling relegation themselves, appointed De Zerbi as manager on June 13. The results look promising so far. Despite losing key players like Matteo Politano and Pellegrini, Sassuolo are currently 7th in the table, tied on points with Roma after 12 rounds. They have played exciting, attacking football, and have a chance to qualify for the Europa League for the second time of their history.

This appealed to Sassuolo and the results look promising so far. After 12 rounds, the Neroverdi were level on points with Roma in sixth place, and they are in a position to qualify for the Europa League for the second time in their history. He has revived the Serie A career of former Ghanaian international Kevin-Prince Boateng and young midfielder Stefano Sensi earned his first cap for Italy thanks to his tutelage.

De Zerbi is a master tactician that made the jump from Italy’s third division to the first without ever coaching in Serie B, but he is not the only one to have done that. Almost a decade earlier, Massimiliano Allegri did the same thing.

Like De Zerbi, Allegri was also a journeyman midfielder in Serie A, having played with Pescara, Cagliari, Perugia, and Napoli in the 1990s. It was at Pescara where he was influenced by manager Giovanni Galeone, whose Delfini teams were known for playing in a cavalier manner.

Before he arrived at Sassuolo in 2007, Allegri had coached four other clubs with limited success, but his solitary campaign with the Neroverdi provided the catalyst for his coaching career to jumpstart. Sasol, as the club and city are known in the Modenese dialect, earned promotion to Serie B for the first time in history and defeated Salernitana on penalties in the Supercoppa di Serie C1.

His work with the Neroverdi attracted former club Cagliari, and he managed the Rossoblu between 2008 until 2010. President Massimo Cellino took the risk on the Tuscan manager, despite having never even proved himself in Italy’s second division, let alone the first division. The risk was worth it. Allegri’s Isolani sides played great football, Cagliari achieved their best finish since 1995, and players like Federico Marchetti, Daniele Conti, Andrea Cossu, and Alessandro Matri thrived under his coaching.

Although he was sacked before the 2009/10 season was completed, this did not stop Milan from hiring him and he won Serie A in 2010/11. A controversial title loss and a narrow top 3 finish followed, and he was sacked during the 2013/14 campaign by the Rossoneri. However, six months later, he landed on his feet. Juventus hired him in the summer of 2014 and he has won four consecutive domestic doubles, while also leading them to two Champions League Finals.

Allegri has evolved into a pragmatist in the traditional Italian mould, creating resilient sides that are built to win as opposed to entertain, but his time at Sassuolo shaped him as a coach, and he proved at Cagliari that he could develop players and set teams up to play progressive, free-flowing football.

While De Zerbi and Allegri had the opportunity of skipping a division before trying their shot at Italy’s top tier, Stefano Pioli had to drop down a level before working his way back up to Serie A.

Pioli had stints coaching in Serie B with Salernitana and Modena before taking charge of his hometown club Parma in the 2006/07 season. It was a tumultuous time for the tactician, and the club was fighting for survival before he was replaced with Claudio Ranieri.

After more Serie B stints with Grosseto and Piacenza, Sassuolo gave him a chance in the 2009/10 season and it was the last time he coached in the Cadetti. The Neroverdi finished fourth that season but were eliminated in the play-offs by Torino. He alternated between the 4-3-3 and 3-5-2 formations in that season, but he has predominantly used the former since then, just as he currently does at Fiorentina.

Chievo hired Pioli for the 2010/11 season and the Flying Donkeys obtained a mid-table finish in Serie A, their best finish in five years. Since then, he has coached Bologna, Lazio, Inter, and now Fiorentina. His Lazio side earned qualification for the UEFA Champions League play-offs in 2014/15 in addition to narrowly losing the Coppa Italia final, and his Viola squad has produced recent Italian starters such as Cristiano Biraghi and Federico Chiesa.

Dropping down to Serie B was a career-changing experience for Pioli, and it was also a great move for another former Sassuolo tactician in Eusebio Di Francesco. He coached his local club Pescara in Serie B and was sacked by Lecce after a poor start to the 2011/12 Serie A season, but like many others before him, the Italian coach found salvation in Sassuolo.

Di Francesco was hired by the Neroverdi for the 2012/13 season and the club earned promotion to Serie A for the first time in its history, winning the title. As a disciple of Czech coach Zdeněk Zeman, he implemented the 4-3-3 formation and developed young players like Ghanaian forward Richmond Boakye and Italian starlet Domenico Berardi. Under his tutelage, Nicola Sansone, Šime Vrsaljko, Simone Zaza all became fully capped internationals, while also earning moves to Champions League clubs (Matteo Politano also made his debut for Italy under his watch, while Grégoire Defrel followed Di Francesco to Roma).

Despite being sacked and then recalled during the 2013/14 season, he just barely managed to keep Sassuolo afloat in Serie A. The next season, his side improved both in the league and the domestic cup, achieving a comfortable mid-table finish. It was steady and secure progress, but nobody was prepared for what would happen next.

In 2015/16, Sassuolo finished sixth, ahead of the likes of Lazio and Milan, and qualified for the Europa League for the first time in their history.

They failed to progress from the group stage, but the 3-0 victory against Ernesto Valverde’s Athletic Club will live on in the memories of the thousands of supporters who filled the Città del Tricolore that day. 19 months later, history would repeat itself: Di Francesco’s Roma rallied to a 3-0 home victory against Valverde’s Barcelona, overturning a 4-1 deficit and advancing to the Champions League semifinals for the first time in 33 years.

Di Francesco did remarkable things with the Neroverdi, and the club has started to gain greater importance in Italian football in recent years because of coaches like him.

Ceramic tiles might be the main exports produced from Sassuolo, but as the years go by, the small town from Modena is quietly gaining a reputation for another product: Italian coaches.