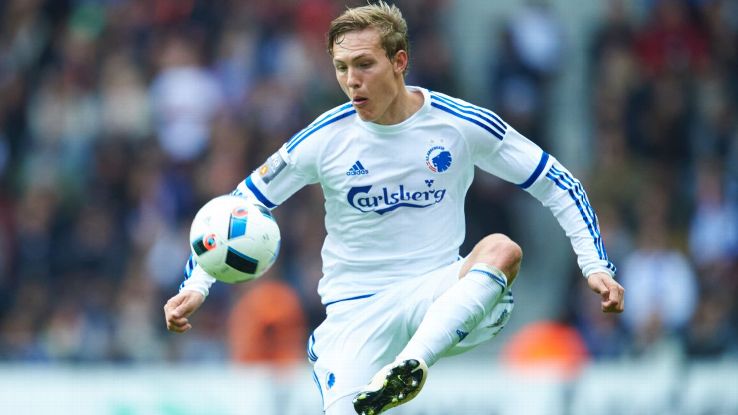 Up until this season, you’d have been lucky to find an expert who had heard of Ludwig Augustinsson. His career started at IF Brommapojkarna, one of Sweden’s best academies, which has produced the likes of John Guidetti (Celta Vigo), Albin Ekdal (Hamburg), Nabil Bahoui (Hamburg), Stefan Silva (Palermo) and Kristoffer Nordfeldt (Swansea).

He made his debut for Brommapojkarna back in 2011 and went on to play 31 games for them until signing for IFK Göteborg, one of the best clubs in the nation. His time at Göteborg got off to a nightmare start when he picked up a knee injury during a game with the Under 21 national team, sidelining him for 5 months. When he made his debut against Malmö, he had another setback, causing him to miss the rest of the season. Not a ideal start for the then-teenage prospect.

In his second season at IFK Göteborg, he played almost every single game (28) and earned a spot in Allsvenkan team of the year. Since his injury, he has been on a steady rise every season. After that great season, Danish titans FC København signed him.

It is in Denmark when he really took a step forward in his development. The Danes have a fantastic track record in developing young talents, and Ludwig Augustinsson is a prime example of that. Let’s start with some stats so you can get a better picture of what he is about and how much he has developed during his time in Denmark.

His assists records are very interesting. He is putting up some really impressive numbers as a left back.

If we take those numbers and put them in more context, how many assists does he average every 90 minutes he plays?

2016/17: 0,35 assist per 90 minutes
At left back, he’s putting up numbers similar to an attacking midfielder, with practically 1 assist every 3 games. But why is it that high? If you go deeper into the statistics, it really shows one of the things he is great at, set pieces. He has 19 assists from corners during his 3.5 seasons at FC København. He has a great left foot and he puts the set pieces into dangerous goal-scoring positions

Ludwig Augustinsson is extremely cool in possession, which might be expected since he played as a central midfielder when he was younger. His left foot is world class, but one of the main things is how consistently dominant he is from the left back spot. You might say, “He is playing for a dominant team in a smaller league, that should be expected” and sure, that can be said. But he has showed his quality time and time again this season in Europe. In the Champions League, he put in superb performances both on and off the ball. In every game besides Porto (H), he came through with impressive performances. Against Euro runner-ups France, Augustinsson held his own. He has done it on the big stage, and he’s ready to take the step up to an elite league.

Not only is he consistent in his play, but he already plays like a veteran. He has a great understanding of the game and really shows how smart he is on the field. It may not show in the stats, but he is already an extremely intelligent and aware footballer. One example is in the game against Ludogorets in the Europa League. He faced a small, fast and technical winger in Jonathan Cafu. He finds himself 1v1 against Cafu, high up the right wing, but he never sold himself to get rinsed. Instead, he got close to him and without tackling or sliding in, he simply closed the spaces around him. That lead to Cafu turning around and playing the ball away from the situation. Those small things can work wonders in defense.

He is by no means a perfect player. Above all, his lack of pace is his biggest weakness. If there is one thing that you can say that is average with him, it’s his slowness. He is not a guy that will take the ball and zoom past opponents to get into space. The second thing is his dribbling; he cannot take on three men like Marcelo; if he had pace and dribbling, he would already be at a top club. Finally, he is really left footed and rarely uses his right foot in possession; when he is forced onto his right, he struggles. But he has two target men he can put set up when he gets into position, and his left foot is nothing short of sublime

There is another thing that should be added, something he does on the field, but off of it. Ludwig Augustinsson sees John Guidetti as a bigger brother. They both came from the same academy and Guidetti paved the way for him. He doesn’t drink alcohol. That might seem like a small thing, but for a young player with a lot of influences, it’s impressive. He always does extra training after practice. He has that drive to always develop and be better. At FC København he has gotten the nickname “24-hour-pro”.

So here is a summary of his strengths and weaknesses.

Ludwig Augustinsson has the potential to be an elite fullback. He is ready to take the next step and has already signed a contract with Werder Bremen.