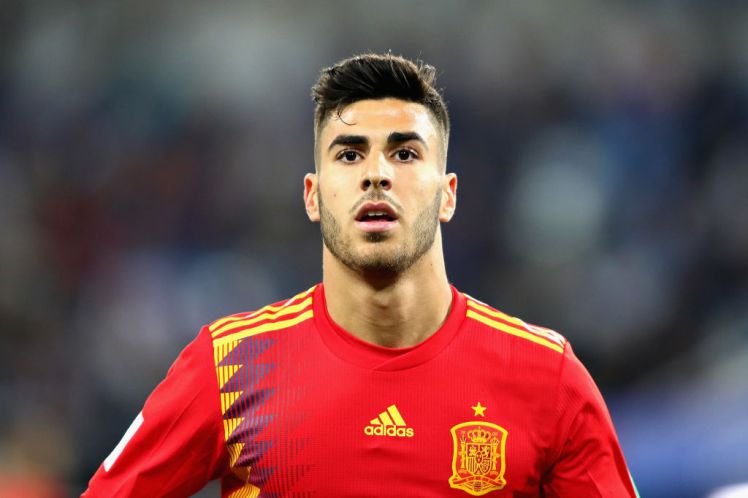 It is no lie that Real Madrid’s Spanish midfielder Marco Asensio is one of stars of the future; if not already making himself known as a star of the present. The 22-year-old is attracting interest from a number of big clubs, who could have to pay Madrid upwards of €150m to seal a deal.

Currently, Marco Asensio is with Spain at the World Cup as the Iberian side look to repeat the heroics of 2010; where the Spaniards defeated Asensio’s other eligible nation, the Netherlands, in the final. Asensio’s mother being Dutch, he could have played for the Oranges but worked his way through the youth setup at Spain; playing for the U16s in 2012 and subsequently the U19 and U21 teams.

Asensio started playing football in the youth ranks at Platges de Calvià, his local side based on the island of Majorca. After three years there, he signed with the youth team of RCD Mallorca, where he would spend seven years between 2006 and 2013 – before eventually having spells with both Mallorca B and Mallorca’s first team between 2013 and 2014.

In the winter of 2014, Real Madrid came knocking for the then 18-year-old Spaniard and the La Liga giants signed him for a fee of €3.9 million. Since signing for Madrid, Asensio has played 91 times for Los Blancos in all competitions; whilst also making 14 appearances for the Spanish first team.

Asensio’s preferred position is as a central-attacking midfielder, yet, due to Madrid’s wealth of options in this position, he has largely had to settle for playing out wide on the left. Asensio is unlucky in the sense that at both Spain and Real Madrid, Isco is thriving and pulling all the strings from the CAM position. In the 2018 World Cup so far, Asensio has played just 39 minutes; failing to feature at all in the 3-3 draw with Portugal.

Asensio is a gifted passer of the ball, fitting nicely into space on the left-hand side; allowing him to create space and fashion opportunities for his attacking teammates. For Madrid, he drags defenders out to the left, giving Cristiano Ronaldo or Karim Benzema the opportunity to surge forward. In the 17/18 La Liga season, Asensio managed a pass accuracy of 90.2% and an average of 35.4 passes per game. In addition to this, he plays an average of 5.69 passes per game into the opposition’s penalty box, with a 59.9% accuracy – demonstrating his talent for finding teammates in attacking scenarios.

With 6 goals and 6 assists in 19 La Liga starts (with 13 additional substitute appearances), Asensio is a goalscoring threat too. From long distance, he can fire a mean shot and was responsible for scoring 25-yard screamers in both the first and second legs of the Spanish Super Cup against Barcelona.

When deployed out wide, Asensio enjoys cutting inside and holding up play. With this, he is also adept at playing short passes and lay offs for his team; instrumental to Spain’s, and Madrid’s to an extent, style of tiki-taka football. A quintessential Spaniard in terms of both style and ability; frequently making forward runs, taking on defenders and whipping in crosses.

When looking at Asensio’s weaknesses, the main ones appear to be his short-range shooting and lack of defensive mindedness. With the midfielder having started 10 of his 22 La Liga/Champions League appearanaces from left midfield, and just seven times from a more advanced left-sided role; defending is expected of him. At the very least, Asensio needs to work on his position and should aim to track back when called upon. If he can work on this, he will also grow as a central-midfielder, able to quickly turnover possession and launch counter attackings going forward.

For Asensio at Real Madrid, the main problem is that he is not able to play his favoured CAM position; and his development could be hindered as a result. Living in the shadow of Isco will not do the 22-year-old any favours and a move elsewhere could be for the benefit of his career. With Liverpool reportedly interested in making a bid, this Summer could be Asensio’s chance to make a name for himself elsewhere and he will be hoping to impress at the rest of the World Cup, despite receiving a lack of game-time.