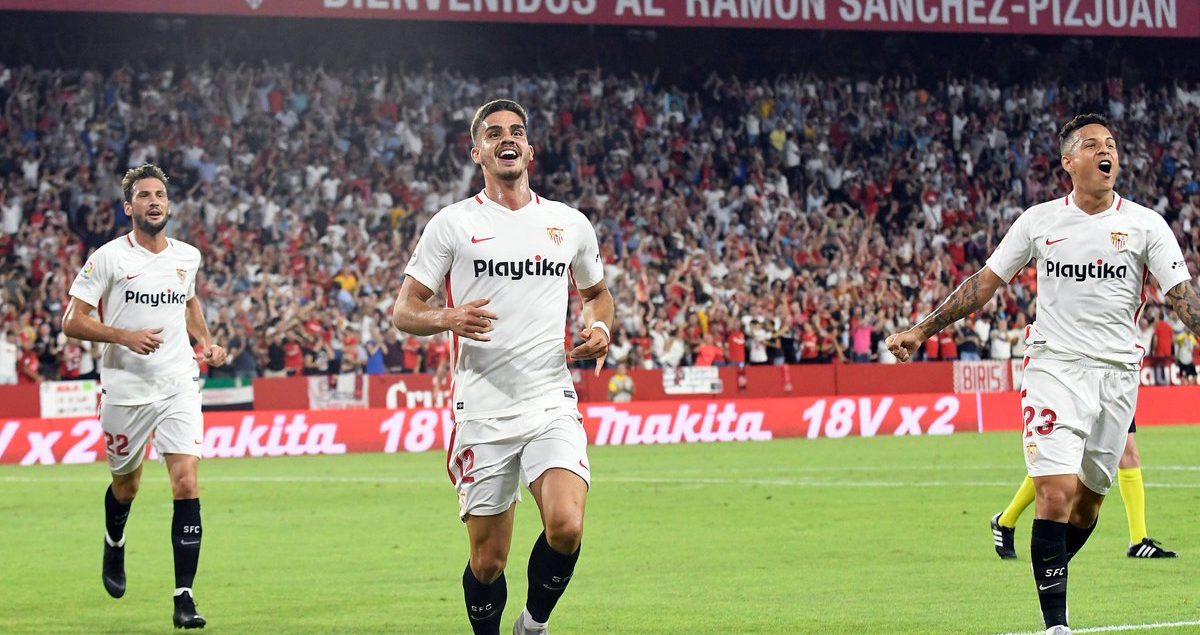 Sevilla are flying high at the very top of the La Liga table after eight matches played, but manager Pablo Machín has called for his men to keep their feet firmly on the ground.

“We must remain calm and realise how long the season is, that there will be tough runs of results and if we do not analyse the standings then we will not get vertigo.”

Few had predicted that Sevilla would find themselves at these heady heights before the season had begun. Many had tipped Los Hispalenses for another campaign besmirched with uncertainty, inconsistency and mediocrity after the preceding season’s shortcomings.

Following the underwhelmingly short-lived tenures of Eduardo Berizzo and Vincenzo Montella, married with the departures of key players such as Steven Nzonzi and Clément Lenglet in the recent summer, optimism surrounding the Andalusian outfit was not prevalent.

However, after a period of uncertainty, Sevilla appear to have reclaimed their identity, with creative players and free-scoring strikers at the forefront of a new-look, exuberant side led by the management of Pablo Machín, a promising young coach with a desire to succeed at the top level.

It was not a glamorous appointment, nor one that prompted widespread acclaim. But the arrival of former Girona boss Machín at the Ramón Sánchez Pizjuán appears to have injected fresh energy into a previously stymied Sevilla squad, with a balance of technical quality, tactical intelligence and physically gifted players all contributing to an unexpectedly impressive start.

Machin’s side operates almost mechanically, functioning as a unit while in and out of possession, creating and preventing overloads and seamlessly transitioning from defence into attack. Sevilla are a team who have focused not on controlling the ball for large periods in matches this term but using possession effectively, ruthlessly slicing through teams and creating several chances for their in-form strike pairing of Wissam Ben Yedder and André Silva.

This has only been reflected by the numbers. In the top five leagues in European football, Sevilla have the lowest possession share for a team in first place, amassing an average of just over 49% in their eight games so far.

A peculiar statistic, especially in La Liga, without doubt, however this arguable shortage of a dominant edge has not acted as a hindrance to the team’s chance creation. Sevilla’s xG score from open play stands at 12 from eight games, the highest figure in La Liga by a distance.

Sevilla’s ability to freely create opportunities for their attacking outlets has owed to the bravery of Machín. Few managers have the courage to utilise three more offensively minded central players but the Spaniard has constructed a system by which the squad’s strengths can be played to without their weaknesses being exposed.

A busy summer transfer window occurred in Seville, with a number of high-profile signings added to the ranks. Netherlands international Quincy Promes was a standout arrival, with Maxime Gonalons, Ibrahim Amadou and Joris Gnagnon among others also strengthening the squad.

However, Machín has favoured a slow integration of fresh blood into this Sevilla side as he continues to build around the existing core of the team, making use of its multi-functional, industrious options before introducing the full extent of the club’s summer recruits.

The table-toppers have an abundance of attacking quality, namely in the creative areas. Éver Banega, Franco Vázquez and Pablo Sarabia have been favourable options as a trio of technical midfielders for Machín, with Jesús Navas and Guilherme Arana providing the team with width as wing-backs.

Simon Kjær and Sergi Gómez have been mainstays in Sevilla’s back three this season, while Daniel Carriço and Gabriel Mercado have battled to claim the third central defensive position in front of impressive goalkeeper Tomáš Vaclík, who signed from FC Basel in the summer.

The two players who have grabbed the headlines for Sevilla, and perhaps rightly so this term, though, have been the men providing the goods at the top end of the pitch. André Silva has put his woes at AC Milan last season behind him and has discovered a new lease of life under Machín, finding the net on seven occasions in only eight games.

Portugal international Silva is currently thriving in a strike partnership alongside Wissam Ben Yedder, the enigmatic but ever-dependable French forward. From only four starts and two substitute appearances, the attacker has netted five La Liga goals and also chipped in with an assist.

The duo have conducted a fruitful partnership ahead of Sevilla’s creative force, with Ben Yedder dropping into deeper zones to provide the likes of Banega with passing options between the lines. Ben Yedder’s movement has been a fundamental aspect of Machín’s tactical approach this term, with the striker’s positional intelligence allowing Silva to find space in advanced positions, thereby contributing to the quality of chances Los Hispalenses have conjured up for their rejuvenated front-man.

Sevilla have not adhered to the usual trends in La Liga and have emerged as a team who approach high-pressure games without fear and only with hunger and urgency. Their free-flowing, forward-thinking style of play has encapsulated supporters as the opening stages of the season have progressed.

Victories such as their recent 3-0 thrashing of Real Madrid go some way in depicting just why. Julen Lopetegui’s side have been in poor form of late but headed into this match still as favourites, despite Sevilla’s recent success. Despite this, though, only one winner was ever going to emerge, as Machín’s tactical approach saw Real’s attacking talents nullified and their defensive deficiencies exposed, as three first-half goals secured a memorable win for Sevilla.

Real Madrid were unable to cope with the strength that Sevilla portrayed in transition, as they sliced open Los Blancos’ defensive structure on the break and made their lack of cutting edge in front of goal pay. Sevilla cut off Real’s passing lanes to Casemiro, ensured that wide spaces were covered effectively by Navas and Arana and ensured that their combinations on the flanks led to purposeful opportunities.

Though this win was more memorable than others, it was hardly a revelatory result. Sevilla have now got to grips with Machín’s systemic demands and after a period of adaptation, are running riot as La Liga’s entertainers.

The 43-year-old saw his new club accumulate just four points from their opening four games, as tactical inadequacies and individual errors left them only one point above the relegation zone. The following four games, meanwhile, brought unexpectedly drastic changes as Sevilla blew away teams with their aggressive style and emphasis on attacking productivity. Machín’s men scored 14 goals and picked up a maximum total of 12 points, leaving them at the top of La Liga.

Barcelona and Real Madrid’s respective slumps this term have been the more documented headlines in La Liga, but sufficient praise has not yet been directed towards Sevilla, who have emerged as the league’s most intriguing, expansive team for the neutral’s observations.

As the footballing heavyweights of Spain struggle for inspiration and, in Real’s case, in front of goal, Sevilla present an alternative. Machín’s men take risks in possession; they play on the front foot and they bid not to dictate matches by typical control of the ball but by sharp movements and incisive, penetrative passes.

Next up for Sevilla is a fixture against the reigning champions of Spain, Barcelona at Camp Nou. The encounter is set to be one of intrigue, as the table-toppers prepare to test themselves once more against the country’s elite opposition.

Whether or not Sevilla can continue to lead the way at the summit of La Liga remains to be seen. However, after a season of stagnation, it seems the entertainers of the division are well on their way to a bright future under the stewardship of Machín.