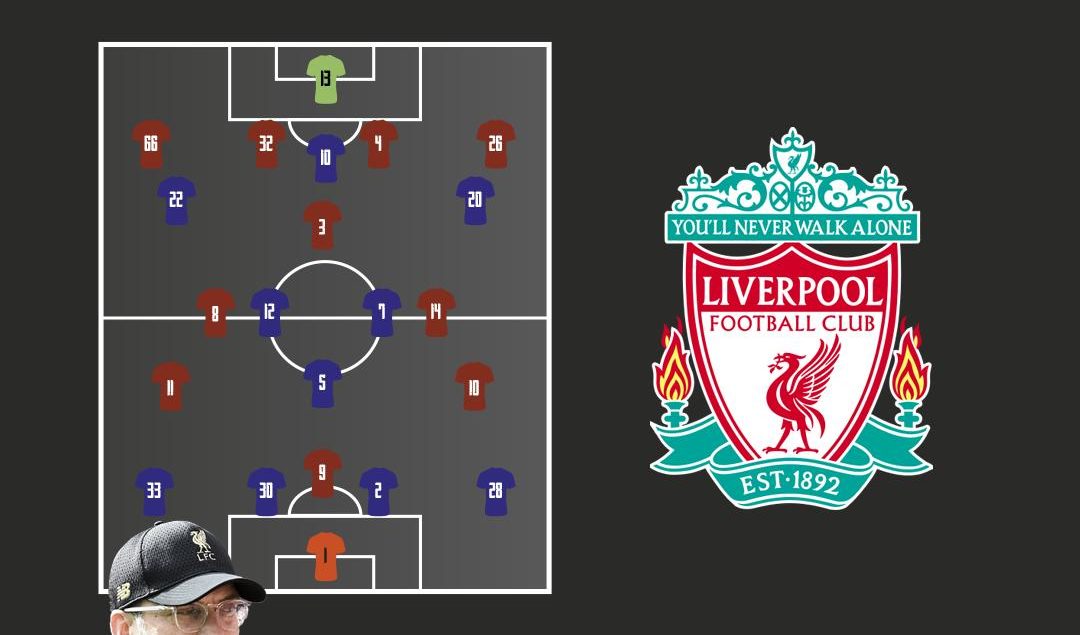 Last Sunday, Liverpool and Chelsea matched up for a pivotal match, one that would have dire implications for Liverpool’s title chances and Chelsea’s top four hopes.

This game was an absolute cracker, with elements of absolutely everything that make a football match great – good defensive organisation, superb attacking play, missed chances, last-ditch tackles, slaloming dribbles and of course, a spectacular finish by a player gradually getting back to his best.

To top it off, there was also a Steven Gerrard-esque slip from Andrew Robertson, but Liverpool weren’t to be denied this time, as they recorded a 2-0 win over Maurizio Sarri’s side.

Jürgen Klopp persisted with Fabinho, Jordan Henderson and Naby Keïta in midfield, the same trio that secured Liverpool’s 2-0 victory over UCL opponents Porto, and the decision proved successful, as Henderson assisted the first goal and Fabinho dominated the midfield.

The Reds began in their customary 4-3-3 formation,with the full-backs pushing up high to join the midfield and then the attack. In the build-up phase, Trent Alexander-Arnold and Robertson could be seen on the same line as Fabinho (the deepest of the three midfielders), and they went forward with ease as Liverpool worked the ball into Chelsea’s half. In the final third, the fullbacks acted as auxiliary wingers, either staying wide or cutting inside depending on the position of Liverpool’s wingers.

In midfield, Fabinho was the deepest of three, with Keïta and Henderson operating in attacking positions. In the first half, the only Chelsea player who attempted to exert any sort of pressure was Eden Hazard, who was deployed up front as a false 9, and Fabinho’s presence during the initial phase served two benefits: it enabled Liverpool to play a simple triangle to nullify Hazard, and it gave them an added defensive presence during the sole occasion when the Belgian received the ball and drove at the defence.

The Brazilian’s ball-winning ability is superb, but for most of the match, it was his talent on the ball that stood out, as he broke the lines and found the three forwards in dangerous areas, a direct consequence of the defensive organisation deployed by Sarri.

Keïta had a decent game overall, but there still seems to be an uncertainty to his game, as he showcased an unusually sloppy first touch and a worrying tendency to switch off in defence. The latter directly resulted in Chelsea’s first chance of the game, with Hazard brilliantly controlling a pass over the top, but luckily for Keïta, the Belgian only managed to hit the post.

He combined reasonably well with Sadio Mané and Robertson on the left, but he was largely ineffective, and it was no surprise when Klopp hauled him off for the ever-reliable Wijnaldum in the second half.

On the other hand, Henderson was absolutely brilliant, playing deft passes forward and chipping in with the cross for Mané’s opener. Mohamed Salah’s path to goal was blocked by David Luiz, but Henderson appeared out of nowhere to take charge of the situation, creating space for the Egyptian with a decoy run. What’s more, his defensive presence proved vitally important for Liverpool as they weathered the 20-minute storm that Chelsea unleashed after Salah’s stunning second goal.

This was a captain’s performance from the Englishman, and even if Manchester City manage to pip the Reds to the title, Henderson’s underrated contributions will be fondly recalled in what has been a superb season for the Anfield side.

Up front, Roberto Firmino worked hard but just couldn’t get close to goal, only managing to apply a weak touch to Alexander-Arnold’s superb delivery from a left-side free kick. This was not a great night for the Brazilian, but his work rate was as essential as ever, as Liverpool routinely put pressure on the newly-introduced Andreas Christensen to induce turnovers.

Firmino may not have made an impact on the ball, but his strike partners more than made up for the Brazilian’s off night, scoring a goal apiece to help Liverpool regain the top spot.

Mané’s pace gave César Azpilicueta a torrid time, as the Spaniard failed to deal with the Senegalese, and his combinations with Keïta and Robertson made it all the more difficult for Chelsea to contain the Reds’ attack. Correspondingly, Emerson and David Luiz were pinned back on the right by Salah, Henderson and Alexander-Arnold, with the Egyptian in particular having one of his better games.

Salah might lack Hazard’s ability to dribble past opponents in 1v1 situations, but the directness of his play is exceptionally difficult to contain, as Emerson found to his detriment. The only occasion where the left back got forward was during Chelsea’s promising 20-minute spell after the Reds’ second goal, but it was back to business after Liverpool mustered the wave, as Salah continued to give the Chelsea backline a torrid time.

Chelsea had managed to congest the central area well in the first half, but that changed in the second half, as the Reds stormed out of the gates to attack a Chelsea defence that had barely settled in. Jorginho was ineffective as a defensive presence, which put the onus on Ruben Loftus-Cheek and N’Golo Kanté to defend Chelsea’s midfield and box, but Liverpool were simply too quick for the away side as the Blues struggled with the barrage of attacks launched at them.

Even assuming that they had dealt with the Reds, there was little Sarri or anyone could have done about Salah’s absolute rocket of a shot. It was just one of those occasions where all you could do was stand back in amazement at the precision and technique involved in making that shot.

A special mention here for Liverpool’s best player on the night – Alexander-Arnold. It is difficult to think that a youngster with such a gift for distribution is confined to a right-back role, but in a world where the role of a full-back has been revolutionised, it is perhaps the best position for the 20-year-old.

The cross-field passing between him and Robertson is a delight to watch, but this time around, it was all about the homegrown right back, as he switched the ball to the left to put in some wicked deliveries from corners and free-kicks.

Furthermore, his dead ball delivery was simply otherworldly, and Firmino should have done better with a sensational delivery from Alexander Arnold’s in-swinger.

This result bolds poorly for Chelsea, who continued their disappointing record against the top six. Despite having played a game more than each of their top four rivals, Chelsea are a point below Spurs, tied with Arsenal, and only two points above Manchester United. Perhaps more worryingly was the manner in which Sarri set his team up, with the principles of Sarri-ball seemingly abandoned in favour of an organisation that was reminiscent of the Conte era.

Chelsea set up in a 4-5-1 in the first half, with Hazard used as a false 9 and Willian and Callum Hudson-Odoi on either side. The midfield three was composed of Kanté, Jorginho and Loftus-Cheek.

The away side looked to congest the central area of the pitch, denying space to Liverpool’s midfielders in the center as well as the half spaces. When Liverpool’s defenders had the ball, one of the interior midfielders would press the ball carrier, and if the fullback advanced to the touchline, he winger would join the midfielder in closing him down.

This tactic was largely ineffective, as Liverpool passed out of the press with composure and caution, and the major benefit of Chelsea’s organisation was denying Keïta and Henderson time and space on the ball to exert their influence on the match. The idea was also to contain Liverpool’s rampaging full-backs, as they had to go through a compact 5-man midfield and the backline to find the final ball.

Chelsea’s approach did yield results in terms of keeping Liverpool off the scoreline, and they went into the break with the score tied at 0-0. The downside was that Hazard was completely nullified, with Virgil van Dijk and Joel Matip doing well to contain him, and Willian was the Blues’ brightest forward in the first half. Loftus-Cheek also impressed with his ability to shield the ball while turning away from opposition defenders, and there were a couple of moments in the first half where he was able to find a good pass after turning away from defenders.

Things fell apart for Sarri’s men once the game resumed, as Liverpool came out roaring and viciously attacked a Chelsea side that attempted to find the rhythm of the first half. Klopp’s side exploited an unbalanced defence, with Henderson crossing the ball for Mané to score the opener. Moments later, Salah scored a scorcher of a goal, which came as a hammer blow for Sarri, who promptly subbed off Hudson-Odoi for Higuaín, with Hazard moving to his favoured left-wing position.

It was following this substitution (and the return of the traditional 4-3-3) that sparked Chelsea’s brightest period in the match, a sequence during which they could’ve tied the game 2-2. Restored to the left, Hazard unleashed his full repertoire of tricks as he turned Alexander-Arnold inside out, and the Belgian was unlucky that his first attempt came off the post. The second time, he miscontrolled the pass and scuffed a shot straight at Alisson.

However, this 20-minute stretch was an anomaly, as Liverpool soon slowed down the match to regain their composure. Once they found control, Chelsea reverted to the same sterile side that’s become all too familiar at the Stamford Bridge, and Ross Barkley’s entrance did not make any impact whatsoever.

Higuaín offered no goal threat, and Hazard was adequately contained by Liverpool for the remainder of the match, and the Reds closed out the game with routinely with James Milner and Wijnaldum guarding against any potential breakaway from the away side.

This match helped Liverpool exorcise the ghosts of 2013/14 to some extent, as they outplayed Chelsea for large stretches of the game. The pressure is back on City, who must wipe away the agony of this week’s Champions League elimination by defeating Spurs and Manchester United in their next two games.

For Chelsea, the season of woe continues. With the looming prospect of Hazard’s exit and another season without Champions League football hanging over their heads, Sarri is on borrowed time at the Bridge.