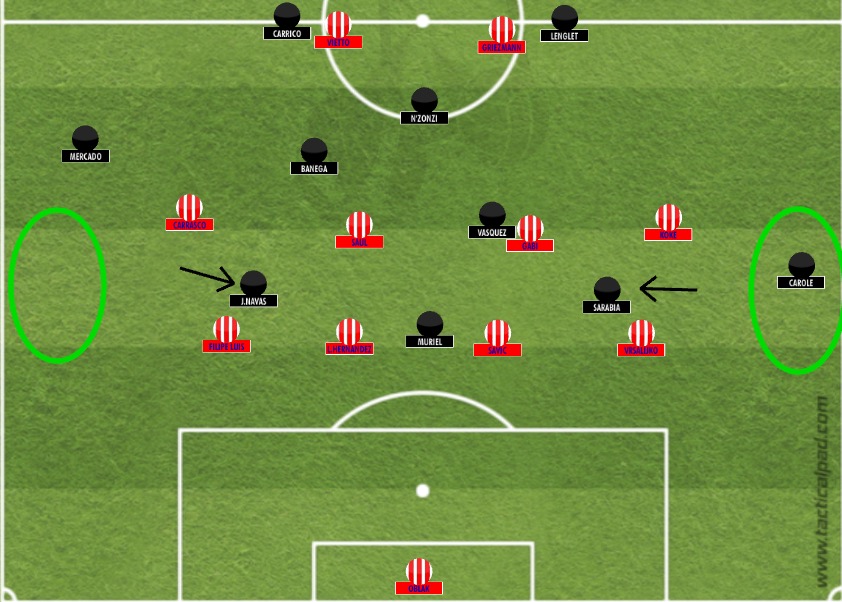 Meeting at Atletico Madrid’s new home, Wanda Metropolitano, was two of the four foreign La Liga managers. Argentina’s Eduardo Berizzo would travel with his Sevilla side to face fellow countryman Diego Simeone in a battle for second place in the table, following a strong first five games from both sides. Two of the league’s most exciting coaches would be looking to retain some early pressure on leaders Barcelona, whilst looking to pull a couple of points away from trailing rivals, Real Madrid. In the process, the tacticians and the talent available to both was sure to produce an excellent tactical battle. There was little surprise in how either team lined-up. Simeone chose his typical flat 4-4-2. Oblak in goals, protected by Vrsalijko, Stefan Savic, Lucas Hernandez and Filipe Luis as a back four. As the right of the midfield four was Koke, with Gabi and Saul Niguez the central midfielders. Yannick Carrasco was chosen as a left-winger. Griezmann and Vietto played off each other as the front two.

Sevilla used a 4-3-3 type shape. Sergi Rico was the goalkeeper. Mercado right-back, Daniel Carrico and Lenglet the two centre-halves and Carole a left-back. N’Zonzi played as a pivot. Argentinian midfielder Ever Banega played an extremely flexible role from a base position slightly ahead of the 6, N’Zonzi. Franco Vasquez made up the midfield to a three from a hybrid 8/10 role. Jesus Navas played from a wide right handside role, with Sarabia similar on the left. Luis Muriel played through the middle as lone 9.

Slight Issues in Pressing, Yet Failure to Fully Exploit

There is no perfect defensive or pressing system. Every system has its weaknesses and concedes space in some areas of the field no matter how strong or seemingly unpenetratable it is. In this match, we experienced this with Atletico. Despite being widely respected by many as the best defensive team in Europe, it is inevitable that there are always weaknesses and not every inch of space can be controlled at all times.

With Sevilla building in a way which had some emphasis on numerical superiorities and combinations in tight spaces, Atletico made minor adaptions to their press in order to defend against this. Defending in their usual flat4-flat4-flat2, the first two banks remained the same as always; maintaining horizontal compactness whilst their line shifted towards the ball, though also retaining some degree over control and awareness on the space they were shifting away from. The front two, usually defending primarily on ‘their’ side of the pitch, blocking any passes from centre-back to centre-midfield spaces, any good CB-to-CB switches and any good passes to wide areas. Today however, the front two’s pressing movements changed slightly. Both strikers moved over to the ball-near half of the field, leaving the far halfspace and CB quite open at times. Above we can see how the far-striker (Vietto) has shifted over to close the space for Sevilla combinations, and eradicate a numerical superiority should Banega make the dropping movement expected from him in such situations. Doing so was mostly effective for Atleti in preventing Sevilla progressing to the second/third stage of possession, as combinations were very difficult with Atleti blocking most of this space they wanted.

There were situations were Sevilla successfully combined centrally and progressed/accessed the far-side through Atleti’s press.

Key to this was the timing of N’Zonzi and Banega’s movements in relation to the CB’s. The movements needed to be quick and allow them to receive almost instantly, before Atleti could shift and block their space and passes. Banega’s flexible role was very effective in allowing for flexible midfield positioning, which was required to receive at the right time from the backline.

This type of shifting from Atleti’s strikers in pressing did expose inefficiencies and weaknesses from both teams however. In terms of Atletico, obviously by shifting both strikers to the ball-near side, the space on the other side one striker would typically defend was left far more open than usual. This was highlighted in the image above. With Vietto shifting over to support Griezmann in his defensive action, Sevilla’s RCB Carrico, is left open the right halfspace. With Vietto having a focus on blocking the centre/Sevilla’s left halfspace with Griezmann, he cannot press from an angle which blocks Carrico here. This provides Sevilla with very easy access, a short horizontal pass, to a free man in an open space.

Looking at this potentially positive situation from Sevilla’s point of view, the Andalusians were nowhere near exploitive enough of these opportunities Atleti gifted them to progress. Rather than playing the quick, simple horizontal pass to the other halfspace and dribbling into the open midfield space for a few metres, Sevilla more often than not played the ball all the way to the ball-far wing. If they had used the open halfspace well, the free man could have drove forward with ball and forced an extremely enduring Atletico shift as well as provoking Atleti’s now ball-near CMF or wide MF to press them, as it would be dangerous to allow him to carry on dribbling. This provoking dribble could have seriously disrupted Atleti’s defensive shape. Sevilla were slow and rather indirect with their horizontal circulation however, and were far too tempted to fully escape the immediate Atleti pressure by passing all the way to the wing, allowing Atletico more time to shift and recover to their again strong flat 4-4-2.

With Sevilla’s inefficient ciruculation and usage of the chances of progression Atleti frequently gave out, Simeone’s men were then themselves provided with the opportunity to press well and prevent progression, which as expected, they took very well. As Sevilla passed to the full-back/wide CB in a rather unthreatening position, Atleti’s now ball-near wide-midfielder, as well as the two CMF’s, made very strong shifts towards the ball. The now ball-near striker, sometimes his partner too, also made quick horizontal shifts out to the ball-near halfspace. From here, Atletico defended horizontal lines extremely well. There would be pressure from Atleti’s wide MF from angle which prevented passes to Sevilla winger, the ball-near CMF would move diagonally towards the ball to, blocking any lanes to an 8 or dropping forward. The ball-near ST from here would attempt to block the pivot or the near-CB, leaving open whichever one was less efficient for Sevilla progression/combinations situationally. By blocking effective horizontal lanes inside for progression, Sevilla found access to the central spaces difficult following passes out to the wing.

Threatening Wide Movements, and Lack of

The differences in occupation of and movements within and through the wide areas were key to the playing of the game in the attacking phase of play for both sides. Both the structuring in these zones, and the frequency and type of movements by either side very rather contrasting.

The home side, Atletico Madrid, had very flexible and differentiating usage and the way they accessed high positions out wide, though the players occupying it was consistent. On the left, Carrasco was pretty much omnipresent high on the wing. Filipe Luis offered some supporting movements, but Carrasco was certainly the main man making threatening direct movements here. On the right Koke was the main provider of width, rather than a wide, direct attacking outlet like Carrasco. Running in behind on the right was more often French striker Griezmann, whose threats of running behind the right of their defensive line were key to Atleti’s attacking strategy down the right. Generally, Atletico’s attacking through wide spaces was very effective.

On the left, the main strategies/patterns we seen were focused creating an opportunity for Carrasco to receive the ball on the run in behind the defensive line.   On the left, this was done quite simply. When there were situations were there was potential for such a pass and receive, Carrasco would make a threatening run in behind the FB. Either Carrasco would he be able to receive here, or Mercado would follow him, which stretched the Sevilla backline on both axis. Ways in which Carrasco could be found were also rather simple. Vietto made dropping movements and carry the ball through the left halfspace when he received. From here, he and Saul would look to combine and the left halfspace to draw out a Sevilla defender, and then pass through the space to Carrasco running in behind. The frequency of Carrasco’s threatening movements were key to Atleti stretching and threatening the Sevilla defence.

Contrasting to the frequent threatening and purposeful movements of Atletico on the wings was their opponents Sevilla. Working from a structure that created combinational situations in the centre and open spaces on the wing, it was surprising to see how inefficient Sevilla were with their usage of the wings. Also surprising, was the common inverted movements of Jesus Navas and Sarabia. Both typically traditional ‘out-and-out’ widemen, their skillset seemed to lack the required qualities to play the halfspace roles which had a great combinational focus. This left full-backs Mercado and Carole as the primary occupiers of the wings. These were important roles as the wings were often free due to Atleti’s narrow defensive shape. At times, we seen effective combinational play from Sevilla inside Atleti’s block, usually when the more technically gifted Banega and Vasquez were included. These combinations allowed Sevilla to play between the lines of the block, and access the space outside of it, on the wings. From here however, Sevilla were rather weak and unthreatening with their attacking movements. Gabriel Mercado would only occupy the wing infrequently, making slight stretches for Atleti. He would mostly cross from deep, or look back inside for horizontal lanes. On the left, Carole was positioned high on the left, though was very unthreatening or vertically-stretching with his movements. He rarely moved or looked to receive beyond Vrsalijko, and always looked to be negative on the back foot when he did receive. This hesitation and lack of vertical threat from wide gave Atleti the few vital seconds they require to horizontally shift and prevent dangerous progression out side.

As is so often the case, the speed and efficiency of Atletico Madrid was too good for their rivals. In all phases of the game, Los Rojablancos looked far too strong and commanding. Berizzo’s Sevilla looked to have periods of quality, and even managed the mean feat of manipulating Simeone’s 4-4-2 block. However, the Andalusians were not effective enough with their possession, nor defensive actions, in order to truly grab hold of the match.