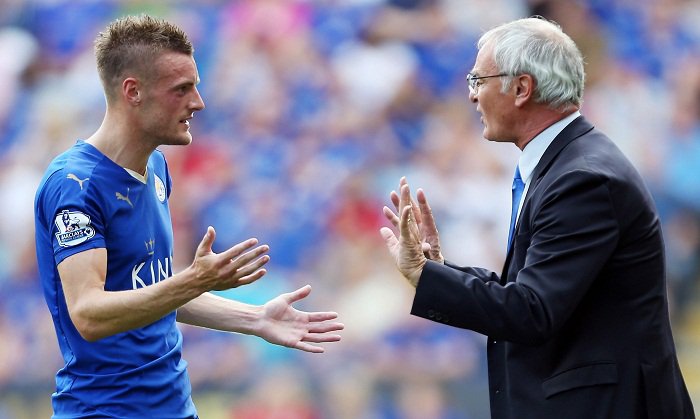 There is still an element of surrealism about the whole thing for us. I have grown up on second tier English football by and large, regularly visiting grounds such as Barnsley, Preston and QPR. It’s one thing getting used to the surroundings of Old Trafford, Anfield and the Emirates, but it’s another entirely seeing that starred ball on the centre circle of Leicester’s pitch. It’s all quite remarkable, and it has provided an escapism from what has been an otherwise sorry league campaign.

Leicester started slowly this season. With just three defeats in the whole of last season, it felt like a throwback to the Leicester of old: on the opening day, we lost to a Hull City side that could barely string together a starting eleven. Treated like a blip at the time, that Hull game has become the rule rather than the exception. Leicester have only picked up three points away from home, no wins, five defeats by three or more goals (if you include Porto too), they haven’t even lead a game away from home this season. It’s the textbook definition of a fall from grace.

Our home form is better, but as of late, it appears to be going the same route – three defeats in four, two hammerings and just a solitary goal. Leicester are the out of form side of the Premier League, and a defeat to fellow relegation candidates Swansea at the weekend has re-affirmed the belief of many that the English champions will be playing Championship football next season.

The fall has been as rapid as the rise. The direct attacking threat has become all too predictable, the once-rock solid defence has become a charity for the opposition, and the never-say-die attitude that has produced so many comebacks has vanished.

The Champions League provided a different test. In beating Porto at home, Leicester produced their most impressive result of the season. The other games against FC Kobenhavn and Club Brugge were navigated professionally, but without style. I feel Leicester did what they had to in what could only be described as a fairly weak group, but Leicester do deserve credit as they did go into that group with comfortably the least European experience. Leicester did enough to finish first, but not enough to convince me that we are capable of fending off Europe’s elite.

As excited as I am for this new challenge, I cannot help but watch Leicester at the minute and think we will look so horribly out of place in this game. After winning the hearts of so many last year, it’s been quite a depressing spectacle. We look the antithesis of everything that made us so good, and I have become genuinely worried that Leicester could be on the end of a record breaking defeat here.

Tactics
It is with confidence that I say that Ranieri will line Leicester up in a 4-4-2. He stuck rigidly to 4-4-2 last season, and it paid off. The presence of N’Golo Kanté was telling, and despite the addition of promising midfielder Wilfried Ndidi, Leicester haven’t really adapted to losing Kanté.

Leicester have opted for some different formations in recent weeks, although the 3-5-2 against Chelsea and diamond against Southampton were simply horrendous, almost like guesswork, and it is of no surprise to me that Leicester were soundly beaten on both occasions, creating nearly nothing.

But Ranieri stresses 4-4-2 is the way forward. I don’t agree with him; I preferred the 4-3-3 deployed in the FA Cup win at Everton last month. In that game, Leicester kept a solid structure, the midfield of Mendy, Ndidi and Drinkwater limited Everton massively, and the attack of Gray, Musa and Albrighton proved to be too much for Everton on the counter.

I expect Ranieri to play the usual back five of Schmeichel in goal, Simpson, Huth, Morgan and Fuchs. It’s quite incredible that after January, Leicester came out of two windows having failed to spend any money on an ageing defence. It’s a very limited back four, one that has little use and skill aside from dealing with the physical side of the team. Simpson, Morgan and Huth were recently nicknamed ‘The Hoof Trilogy’ on an internet forum and you don’t have to be a genius to work out the point.

But in their defence, the lack of movement from the midfield is frightening. Drinkwater in-particular has been extremely poor for a while, seemingly refusing to look forward, passing backwards to a defender before the inevitable hoof.

Leicester are renowned for counter attacking, but with no league goal scored in the calendar year, it’s hard to make any kind of case for that reputation anymore.

Unless Ranieri has something lined up his sleeve, I don’t expect Sevilla to have a tougher game all season. Los Nervionenses are suspectible to the counter, but when that is your only weakness, you’re well-covered against fairly any side.

Key players
This again is very tricky. Riyad Mahrez & Jamie Vardy are the renowned attacking threats, but neither have had great seasons and I can’t even guarantee that they will start. It’s actually gotten that bad that I couldn’t say for certain who is likely to be our main source of attacking danger. Demarai Gray has shown glimpses of being a real talent lately but again, there is no guarantee he will play.

I will go with Vardy for this game – the reason being that Sevilla play a high line, and even though he hasn’t had anywhere near the season he had last season, he still got a hat-trick against Man City when they played a similar system. He could be a valuable weapon in this fixture.

Prediction
The only thing about this tie that gives me any hope is quite simply the mental side of it. Everyone thinks we will lose, and it’s an escape from the depressing league campaign. The FA Cup has provided a similar kind of distraction, of which we were eliminated by Millwall on Saturday, and there is always a possibility that the pressure has taken its toll on Leicester this year in the league – the pressure isn’t really on them at all here.

But unfortunately, I think Sevilla are just far too good. They’re very effective in Europe and have faced similar scenarios on many an occasion. They will view this as a terrific opportunity to go as far as they have done in years past, and sadly for us, I think they will rip us to shreds. I will go for 5-1 to Sevilla. Regardless of this, I’ll enjoy the experience. I learned years ago that if you rely on the result to enjoy supporting Leicester, then the chances are you’ll be disappointed, so I’m expecting the worst and hoping for the best.