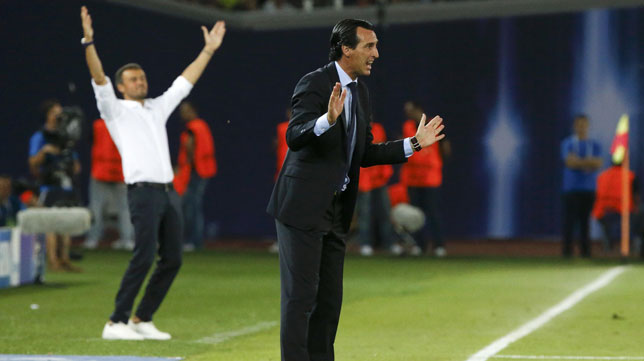 On the 12th of December 2016, the stage was set for the UEFA Champions league round of 16 draw. 8 star studded fixtures were expected, perhaps less so for Paris Saint-Germain fans who were only just adjusting to life under pressure following an underwhelming 2-2 home draw with Bulgarian minnows Ludogorets Razgrad and a 3-0 humbling at the unlikely hands of Montpellier HSC. With many fans longing for Leicester and willing to settle for either Arsenal or Napoli, les parisiens had seemingly picked the shortest straw when they were drawn to face Catalan giants, Barcelona, for the 7th time in 4 years.

Is history an indication of what’s to come?

Les rouges et bleus have not had much luck in previous fixtures, winning one and losing 5 of the clubs’ last six matchups, 2 of which having been at the Parc des Princes.It’s not only wins and losses either, as over all 6 fixtures PSG have lost an aggregate 13-8 and scoring an ever decreasing amount of goals since the original 2013 fixture.

PSG have also sold the ex-blaugrana player and now-PSG all time record goalscorer Zlatan Ibrahimovic since the last time the two teams met, the having scored the most goals against Barcelona for the french club, albeit only 2.

So if history is an indication of anything to come, it’s definitely a bleak outlook for PSG fans.

Can the transfer window look to shake things up?

PSG have had a transfer window far from being boring, with the arrival of Benfica starlet Goncalo Guedes, Argentinian youngster Lo Celso returning from his loan at Rosario Central and the arrival of the talented young world cup-winning German Julian Draxler from Wolfsburg. What have they proven so far?

As of the 1st of February, Giovani Lo Celso has no more than half an hour’s experience in the blue shirt and it was against tunisian club Club Africain in an early January friendly, where he did little more than link up with Draxler and Di Maria. Since then he has gotten no further than the bench and is unlikely to play against Barcelona unless unforeseen circumstances appear.

Goncalo Guedes hasn’t made a big impact either since joining, making his debut in the dying embers of the Ligue 1 top-of-the-table clash between PSG and AS Monaco in late January, where he made little impact but proved some of his notable qualities early nevertheless.

A massive contrast to the previous two players, Julian Draxler has hit the ground running at PSG, scoring 2 goals in his 4 games for the club, including a sumptuous lob over the keeper on his debut against SC Bastia in the Coupe de France and a fantastic curled finished on his league debut against Stade Rennais. While 4 games doesn’t provide the greatest field of information to draw conclusions from, Draxler has made himself heard at PSG, providing much needed competition to the recently depleted south american duo of Angel Di Maria and Lucas, pushing both respectively out of the side for his first 3 Ligue 1 matches.

Although the new PSG recruits have seen limited game time in their new colours, they still provide solid options for the upcoming valentine’s day fixture with Barcelona.

Well, it’s definitely not red hot, but it isn’t terrible either. With 4 games left to play before they take on the Catalan Giants, let’s take a look at PSG’s recent form, from mid December till the Monaco game.

2 days after the Champions league draw, PSG looked to shake off their recent bad form at home against Lille in the league cup, and they came out victorious, easily overturning the northeastern club 3-1, without club and league top scorer Cavani needed, spending the full 90 on the sidelines.

Cavani returned 3 days later to both the teamsheet and the scoresheet for the parisians’ away game to En Avant de Guingamp, but his goal was merely a consolation as the team fell to a disappointing 2-1 loss.

4 days after the disappointing loss in Brittany, PSG looked to round off the year with a win and give 2017 an early kick start with a late kickoff weekday game at home against FC Lorient, and it did not fail to disappoint, with PSG running out 5-0 victors. Meunier, Silva, Cavani and Lucas all got in on the action to sink Lorient a few days before christmas, and more importantly, it resembled a team performance more than any of the previous games did.

The new year came quickly for the Capital club, with a friendly against Tunisian side Club Africain set for the 4th of January, a game where a heavily rotated PSG squad ran out 3-0 victors, albeit unconvincingly.

The calendar still had no mercy for PSG, with a Coupe de France match against Bastia set 3 days after the Parisians’ trip to north Africa, but although hopes weren’t as high as they could be, PSG set their priorities straight, and rolled over Bastia in a massive 7-0 home rout. Spoils were shared throughout the team too, with 7 different players getting in on the spectacle, including Julian Draxler on his pro debut.

Another wednesday game beckoned with a league cup quarter-final against Metz, and although the game was less of a masterclass, ending 2-0, spirits were still high at the Parc.

The same weekend, the relentless calendar period came to an end when PSG returned to League action away against Rennes. The scores were once again lower than expected, ending 1-0, but despite the underwhelming scoreline and overall performance, pundits and fans alike were still impressed by new signing Julian Draxler, who scored the only goal of the game.

Next on the fixture list was a Ligue 1 trip to Nantes, where the scoreline picked up, finishing 2-0 to the french champions who prolonged their streak of wins in the aim of regaining top spot in Ligue 1.

Two days later, PSG continued their games on the road with a League cup Semi against Bordeaux, winning 4-1 in inspiring fashion, with notable performances from Angel Di Maria, who had been out of form prior to the game and Adrien Rabiot, having settled into the side comfortably after his much-awaited return from injury.

With PSG now in the league cup final, focus switched to the highly awaited Ligue 1 top-of-the-table clash with AS Monaco. Although Nice reclaimed the table’s top spot hours prior to the match, their recent bad run of form and lack of squad depth made them most likely to fall short for top spot in May, and PSG’s home game against monaco was hyped up as a cup final-type fixture to decide the champion’s spot 4 months ahead of schedule. Despite the massive media attention and the extravaganza in the stadium before kickoff, the game didn’t live up to attention, finishing 1-1. Hopes were high for players like Di Maria, Trapp and Cavani, expected to make the difference, but it was the unusual suspects who ran the show for Paris: Thomas Meunier, Layvin Kurzawa and Adrien Rabiot proving to be critical to the spoils being shared between the two clubs.

Who are the key players?

While the usual suspects to make the difference would be PSG’s big characters in Marco Verratti, Angel Di Maria and Edinson Cavani, that’s not the full story.

My best bet on players to look out for is:

No big surprise, Barcelona will probably win. Barca may not be in the best state either, but they are still arguably the toughest team in the world and PSG have lots of weaknesses they can exploit. It won’t be as big a rout as in 2014/15, but my definitive prediction as things stand is PSG 1-1 Barcelona at the Parc des Princes and Barcelona 2-0 PSG away at the Camp Nou.

We have a feisty fixture on our hands and although Emery’s men seem as unprepared as ever to go into this colossal game, not much more has been expected of the club by fans, as the reality that 2016/17 is a transitional year has started to sink in for most people.