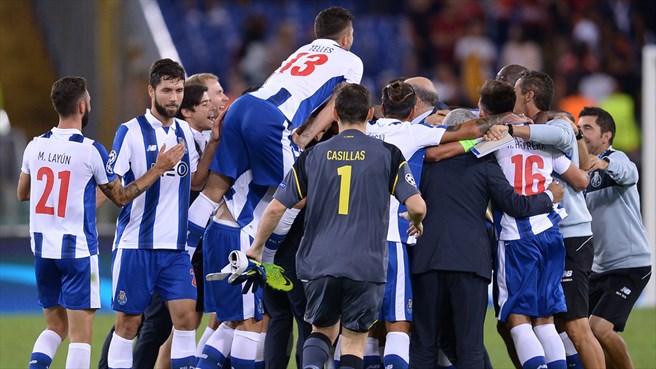 After a trophyless season which saw 3 managers, a failure to challenge for the league title, and a group stage exit in the Champions League, Porto are back. Having played a game more, they sit two points ahead of Benfica in first, and are set to face the Italian champions on Wednesday.

In Nuno Espírito Santo’s first season, Porto has alternated between the 4-3-3 and the 4-4-2, but they have mostly used the latter.

When playing the 4-4-2, Porto usually lines up with Iker Casillas, Maxi Pereira, Iván Marcano and Felipe and Alex Telles in defense. Danilo, a steeltrap destroyer and Oliver Torres, a creative meia-de-ligaçao, form a solid pivot in midfield. On the wings, Yacine Brahimi and Jesus “Tecatito” Corona combine defensive workrate with attacking prowess to make a very formidable attack. Nuno will start André Silva and new signing Tiquinho Soares against Juventus in attack.

After an awful 15-16, Marcano has become one of Porto´s most importante players. He’s incredibly quick to the tackle, strong in 1v1s, very calm on the ball and gifted in his technique. Marcano is having the best season in his career, and he has been one of the best defenders in Portugal this season.

Felipe is a rugged caudillo-type center back; always fighting for every single ball, but sometimes he has a lot of unnecessary fouls, and leaves a lot to be desired on the ball.

Maxi Pereira is a complete right back, with good defensive and attacking skills but Father Time has caught up to him, and he tends to lack intensity and stamina nowadays.

After a poor season at Inter Milan, Alex Telles has become a key player for Porto. With impressive strength, lightning-quick speed, impressive defensive toughness and superb attacking skills as well, with great dribbling and crossing. Alex Telles can spend the entire 90 minutes running, he seems like he never gets tired.

Then, in the midfield we start with possibly Porto´s best player, Danilo Pereira. For me, Danilo is a world class defensive midfielder, a fast and incredibly strong player, who rarely lets opposing midfielders dribble past him.But Danilo is not solely a defensive player; he’s well-equipped at starting attacks by carrying the ball out of defense or by putting long balls into the opponent’s area.

Known as the “maestro”, Oliver Torres loves to have the ball on his, gifted with an amazing technique, adept at quick, short passes, and intelligence. Above all, Oliver is the axle of the team that converts defense into attack.

On the left wing, we have Yacine Brahimi, a massively talented forward with amazing dribbling, but sometimes he’s too selfish and loses the ball quite often. However, his sheer ability to win a game on his own is enough reason to take that risk.

Jesus Corona is team player who uses his great dribbling skills and crossing skills to the benefit of the team. Corona has one major quality: he doesn’t have a weak foot, he can execute perfectly with his right or left.

Porto´s only winter signing, Tiquinho Soares has gotten off to a fantastic start. Soares came and scored two goals in his first game against Sporting, and he’s netted 4 times in 3 games. Tiquinho is not a fast dribbler, but he has inteligente movement and a great shot.

Finally, we have André Silva. André is a key player not for his quality, but for the work he does. He never gets tired and never gives up, fighting for every ball and he’s always pressing the defenders. Besides that, André is also very fast and intelligent, but I think he could improve his shooting skills.

So this is the most likely starting squad against Juventus. Key players, like I said, Marcano, Alex Telles, Danilo Pereira, Corona and André Silva.

Porto are currently on a six-game winning streak, and for the Liga Nos title, in first place.

Porto´s strongest weapon its the defense. It has been the best defense in Portugal this season and one of the best in Europe this season. Another strong weapon for Porto is the home factor; Porto hasn’t lost a single game in Estádio do Dragão this season.

I think Juventus are a very tough opponent but if Porto wins the first game at home without conceding goals, I think we’ll go through. My bet is 2-0 for Porto in the first leg, and 1-1 in the second leg.