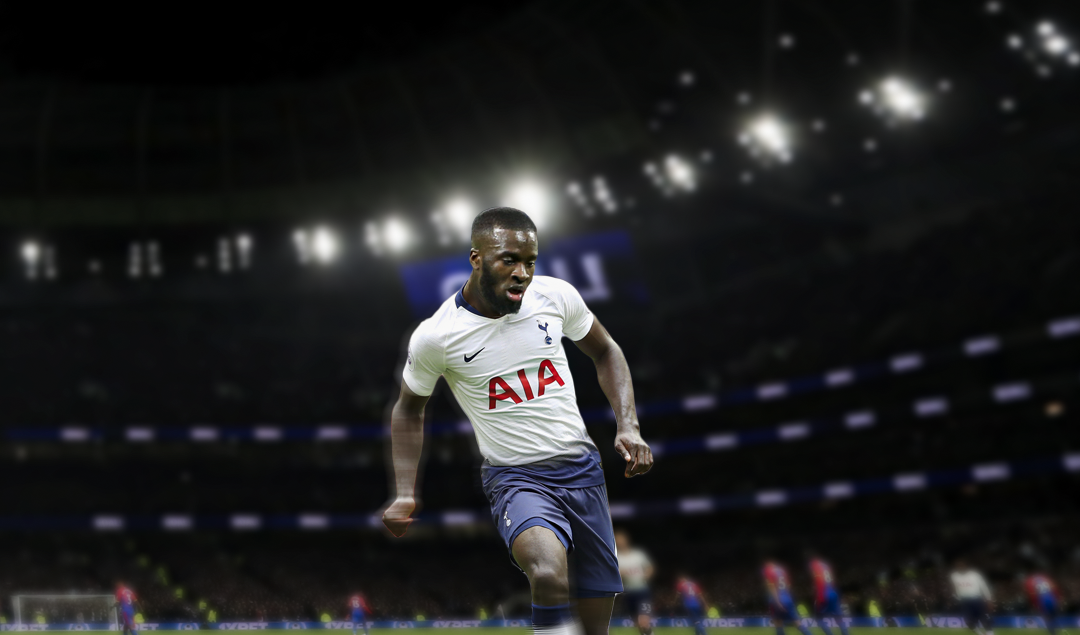 One of the most significant signings of the 2019/20 summer transfer window was made by a team in white.

And no, this is not the story of Eden Hazard finally realising his dream by moving to Real Madrid to play under his idol Zinedine Zidane.

But such is the magic of football; and Tottenham Hotspur getting Tanguy Ndombele’s signature on the dotted line marks a defining moment in the history of the club.

It is yet another reminder of just how far the Lily Whites have come since Mauricio Pochettino took over, and the Argentine is getting ready to spearhead a new era of success at the club.

This is because the burly Ndombele is two things – the successor to Mousa Dembele that Pochettino thought he’d never get, and the beginning of the next phase of Tottenham’s project to cement their status as a Top Four mainstay in the Premier League.

Tanguy Ndombele’s rise to the top makes for fascinating reading – having been released by Guingamp in 2014 due to concerns about his attitude and commitment, he found himself drifting in the wilderness of the French second tier as a 17-year-old, and after facing rejection from Auxerre, Caen and Angers was finally taken in at Angiers who were willing to offer the youngster – widely considered “lazy” and “complacent” – a lifeline.

Here, he would spend two seasons in the reserves as he struggled to break into the first team despite his evident talent, before enjoying a massive upturn in form and leading the club to promotion to the Ligue 1 from the second tier.

The ever-shrewd Olympique Lyon would then pick up the Frenchman on loan in 2017-18 with a clause to make the deal permanent for a measly €8m; an option the club would exercise after the record outlay from Bayern Munich for dynamic midfielder Corentin Tolisso.

It was here, at the Olympic Stadium that the 22-year-old would become an integral part of French football’s most exciting group of youngsters, as Ndombele shone under the bright lights of the Etihad and the Camp Nou along with fellow prospects Nabil Fekir, Houssem Aouar, Ferland Mendy and Memphis Depay. Continental recognition soon followed under the able but deeply unpopular regime of former coach Bruno Genesio, and some vibrant displays in the Champions League followed by patchy form in the league saw Lyon finish 3rd in the 2018/19 Ligue 1 standings behind PSG and Lille after being knocked out of Europe by a Messi-inspired Barcelona.

Though rumours linked him to a variety of clubs including Manchester United, Real Madrid and Juventus it was ultimately Chairman Daniel Levy who moved quickest to get the Frenchman’s signature on the dotted line, and when the stature of the teams competing for him is considered it is no mean feat on the part of the London outfit.

But what exactly does Tanguy Ndombele bring to Tottenham Hotspur? Why is it that his signature was coveted by the likes of United and Madrid before he signed for Spurs? What exactly does he bring to the table that Pochettino lacks?

The answer, in fact, is simple: Ndombele is the only player capable of replacing Mousa Dembele.

“One was [Diego] Maradona, then Ronaldinho, [Jay-Jay] Okocha and [Ivan] De La Pena. He is a genius too, Mousa Dembele. We always told him, ‘If we had taken you at 18 or 19 years old, you would have become one of the best players in the world.’ I would have loved to have taken him on at 18.”

You must be either genius or a madman to pick Mousa Dembele as your best player from a squad that contains Harry Kane, Jan Vertonghen, Toby Alderweireld, Christian Eriksen and Dele Alli, but if one thing is certain it is that Mauricio Pochettino is no fool.

Why then does the Argentine hold him in such high esteem? What makes Dembele so important that Pochettino was reluctant to let him go in the middle of the campaign?

As it turns out, the answer is as simple as it naïve – Mousa Dembele is really good at moving the ball.

Essentially, Dembele possesses incredible press resistance and a frankly astonishing ability to dribble past entire midfields of players, which makes him invaluable to a vertical-playing team like Pochettino’s Tottenham.

This stems from a quirky brand of street soccer that Dembele pretty much perfected, where the goal was to dribble past players and touch a certain pole with the ball rather than shoot it from distance. A childhood spent perfecting this peculiar style meant that Dembele developed a game that revolved wholly around his ability to dribble past any and every obstacle, which Spurs unleashed to its fullest, most potent extent when they began deploying him as a deep lying midfielder.

Staying ahead of the defence meant that whenever a defender or midfielder was being pressed, they could pass the ball to Dembele, who would shield the ball, turn and bypass his marker in one swift move that left wide open spaces for the rest of the team could gallop into. It enabled Tottenham to play an incredibly vertical style of play, which when combined with their ability to retain possession resulted in the creation of a team that is constantly morphing in shape and formation.

Its starkest form was revealed when Tottenham faced Juventus in the UCL last season, as Dembele bossed the pitch against his opposition number Miralem Pjanic by repeatedly dribbling past the Old Lady’s midfield. The Italians would ultimately win on aggregate but it remains one of the finest performances Dembele has put up in a Tottenham shirt, and by the end was one of the few players who could leave with his head held high after having given his all on the pitch.

In any case, with his departure in the middle of the season, Pochettino had a major problem, and the only satisfactory solution to it required somebody who could play in a manner similar to that of the Belgian maestro.

The absurd ability to take on entire midfields by dribbling is precisely what Tanguy Ndombele brings to Tottenham – which makes him the perfect replacement for Dembele. This is without taking into account the fact that he is just 22 years of age, and has an unbelievably high ceiling for progression and growth.

Ndombele’s first (and indeed, only) idea after getting on the ball is to take it forward by any means possible, which most frequently encompasses dribbling past markers and deep lying midfielders. This stems from his incredible athleticism, which gives him an advantage over most other players in his position and raises the levels he can reach on the pitch. One of his most noticeable aspects is the speed and manner in which he recovers from a sloppy touch or turnover; Ndombele possesses the rare ability not only to win it back in an instant but to turn defence into attack with one drop of the shoulder.

The focus on passing and pressing in the modern game has somewhat displaced the classic notion of effervescent individual play, but Tanguy is breaking the mould with his incredible ability to move not only his own team but also the opposition when on the ball. In this he is quite similar to new Barcelona recruit Frenkie De Jong, another player who is hard to pin down in terms of his attributes as a deep lying midfielder.

The Frenchman is not too great at scoring or creating, instead excelling in ensuring swift transitions and unsettling opposition defensive shapes. However, this won’t bother Pochettino too much, because in Kane, Alli, Son and Moura the Argentine already has players who can score from anywhere on the pitch.

What Tottenham need is an able ball carrier to deploy beside Harry Winks in the midfield to ensure breakneck transitions and creativity from deeper areas, and this is exactly what Tanguy’s job will be at the New White Hart Line. While Winks will play his role in the build-up the job of barnstorming settled defensive shapes will fall to the new man, and his unique profile will ensure that he slots seamlessly into Spurs’ constantly shifting 4-2-3-1/4-3-3/4-3-2-1/4-4-2 array of formations.

What getting Ndombele means for Spurs

Spurs making it to the UCL final was a momentous occasion not just because of how it was done, but because of what it meant for the club going forward, as the Lily Whites can finally claim to have broken the ranks of England’s traditional Big Four.

It boosted the profile of the club and ensured that they had something else with which to draw players to their team apart from just their near-miraculous coach; such is the impact of making a Champions League final especially in the manner that Spurs did. The neutrals rooted for them instead of against Liverpool, which is quite rare in football.

Even as this is being written Dani Ceballos – the star of Spain’s U21 World Cup win – is rumoured to be joining the London outfit, which would mark another accomplishment for the Levy regime. The idea of developing under Pochettino – who in Kane and Alli has a proven track record – is the same sort of pull that Guardiola enjoys, and it is evident that Spurs are committed all the way through to Pochettino and his designs for success.

The ultimate vindication of Poch’s project may have ended in defeat but has heralded the start of a new phase for the club – one in which they are no longer the laughing stock of the London Three. Tottenham has undisputedly supplanted Arsenal in the pecking order; and given Chelsea’s struggled in recent times the day is not far when Spurs might be the best club in London.

The Tottenham brand is finally catching up to the excellent of the team it houses, and a new, glorious era is just around the corner for the Lily Whites.

It’s an exciting time for English football, and for fans of Tottenham in particular. Will they overcome Liverpool to establish themselves as the biggest threat to Manchester City’s dominance of the Premier League?

Only time will tell.