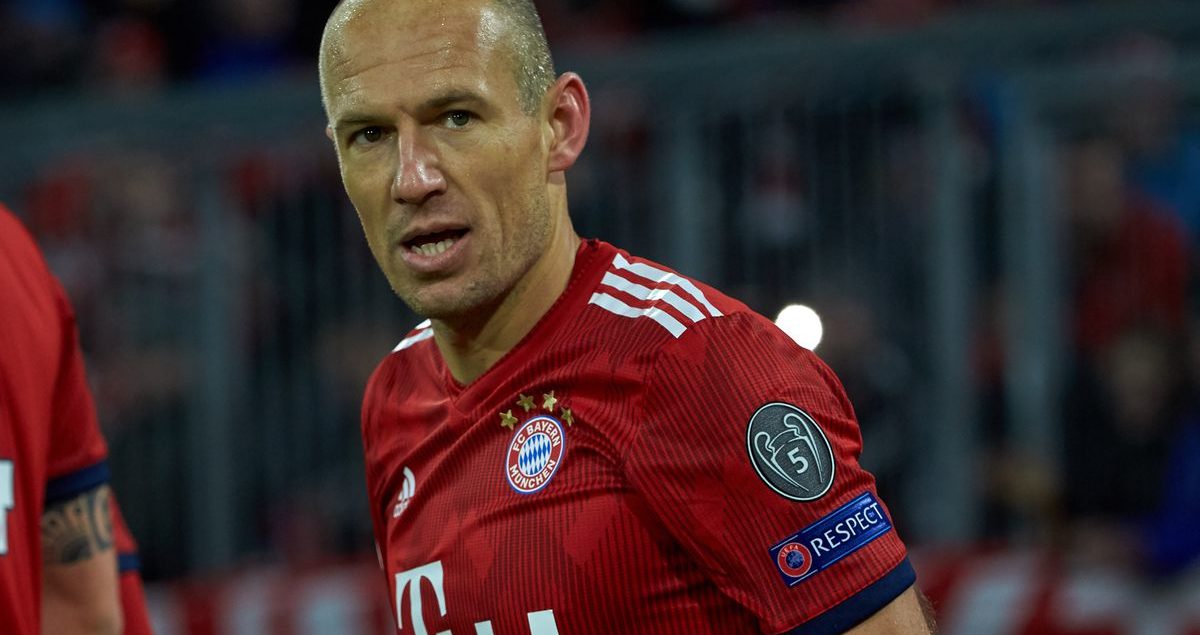 On July 4th, 2019, Arjen Robben announced his retirement from professional football. This article is very special piece to me, as the Dutch winger is my favorite footballer of all time, and among my greatest athletic inspirations. As an amateur footballer myself, I cannot speak on how much Robben’s game and character has influenced the player and individual that I am today.

Whether it be Arjen’s incredible 2010 and 2014 world cup runs, his 2013 UCL winning goal for Bayern, or simply the endless occasions that he humiliated defenders by cutting inside with his left, I will honor these memories forever. I will not provide an overview or summary of Robben’s career achievements, as they clearly speak for their self. Among the thirty trophies, 247 goals, and 162 assists, these accolades are merely a figment of what Arjen Robben’s career meant to many viewers of the game, myself included.

To me, what makes Arjen Robben so special are his characteristics that are not recorded in the stat book. From his immense professionalism, intense competitiveness, pure passion, and sheer discipline, these internal qualities are what define Robben’s career.

Unfortunately, Robben’s career has been tainted by injuries, ranging from abductor, back, ankle, calf, thigh, knee, pinched nerves, sciatic nerve issues, torn muscle fibers, tendinitis, groin strains, cals sclerosis, and more. One of Robben’s saddest quotes, after his return from injury vs. Cameroon in the 2010 World Cup is that “people don’t always understand that it’s hard to be injured and watch the game from the bench.”

Some of these injuries did not leave Robben on the sidelines for just days or weeks, but often months, slowing down the momentum that a top footballer needs to earn individual recognition and accolades such as the Ballon D’or. Specifically, a broken foot injury in a 2005 preseason match against Blackburn for his new club Chelsea F.C. would alter the course of his remaining career.

Despite these injuries, Robben was nominated for the Ballon D’or, with his best finish being fourth place, only behind the likes of the winner Cristiano Ronaldo, the finalist Lionel Messi, and third place Manuel Neuer. Robben’s career has never been about individual awards, however, but instead his significant contributions to bring about team success. No matter the type of injury, Arjen recovered after each setback, and miraculously seemingly returned as a stronger, more improved player.

Whether it be in the Netherlands for FC Groningen and PSV, England for Chelsea, Spain for Real Madrid, or Germany for Bayern Munich, Robben was able to find both individual and team success, winning trophies for every club that he played for. In a recent collective interview paying homage to Arjen Robben, former rival and teammate Mario Götze, a player who is far from shy of injuries himself, perfectly summarized Robben’s mental strength: “the injuries he had and how he fought back. Arjen has proved he’s got it, and that he can weather tough phases.”

Robben’s ability to rebound was not only following injury, but also defeat. In football, players are bound to experience defeat, but it is only the top quality footballers that know how to consistently respond from a tough loss. Notable losses in Robben’s career include his harsh 1v1 shot saved by Iker Casillas in the 2010 world cup final vs. Spain, and his penalty saved two years later by Petr Čech in the 2012 Champions League final against his former club Chelsea.

As many know, Robben redeemed himself in each of these competitions, further solidifying himself as a legend of the game. In the 2013 Champions league final, Robben scored the decisive game winner in the ’88 minute against Germans rivals Borussia Dortmund, one year after his failure in the same competition.

In the 2014 World Cup, Robben was without a doubt one of the standout players in the competition, along with Lionel Messi, James Rodriguez, and Manuel Neuer. In the tournament, Robben netted three goals and recorded one assist, with an average match rating of 8.37. However, as it often is in Robben’s case, statistics alone do not properly define the World Cup performances of the Dutch winger.

In a decisive group stage rematch against 2010 Spain, Arjen scored twice, including one of his most famous goals, if not one of the best in the tournament’s history. Robben chased down a beautifully timed through ball from Wesley Sneijder, beating world class defender Sergio Ramos, before famously cutting inside with his left to score the Oranje’s fifth goal of the night, stamping a remarkable 5–1 victory against the Spanish champions. To score this goal, Robben would run 37 km/hr, or roughly 22 mph, recording the fastest ever sprint speed in world football at the time.

Both the 2013 Champions League final and 2014 World Cup do not even make up half of Robben’s impressive career, but they properly define the type of player and individual that he was/is. If it weren’t for Robben’s unmatched resiliency, determination, and discipline, one could argue that his career could have been finished after his Chelsea spell, given his horrific run of injuries that persuaded the London club to sell him to Real Madrid in the fist place. When Robben was practically forced out the door in 2009 by Real Madrid due to the new arrivals of Cristiano Ronaldo and Kaka, rather than sulking, the winger decided to make a name for himself in Germany for Bayern Munich.

Robben never let quit no matter the circumstance, and came back stronger through absolute trust and cooperation with his team’s medical staff, and extra individual work following team training. At the international level, despite his injuries, Arjen ironically became the last of his generation to retire from the Dutch national team, joking that “they called me the man of glass but I had the last laugh” (FourFourTwo). For those that believe everything happens for a reason, Arjen’s career serves as a reminder that one should never give up because of failure, for repetition, fortitude, and adaptation are the keys to eventual success. As a fan of Arjens’s, I found it increasingly frustrating to witness Robben face so many setbacks, but the joy of seeing him bounce back each and every time is one of the many reasons that he is my favorite footballer.

Robben once stated that “the older you get, the better you get to know your body,” which rang true throughout his career. Although I am heavily biased, there are many respectable viewers of the game that believed when Robben was at his very best physically, he was comparable to the likes of Messi and Ronaldo, being the only footballer consistently linked to their era of greatness.

Along with resiliency, Robben’s humility, leadership, and overall professionalism off the pitch is one of the many reasons that he is my favorite footballer. I have nothing against superstars that enjoy the stardom that they have earned, and boast their talents from time to time, but to me, it is more honorable to let one’s game speak for itself. Everyone knows who the flashy, boastful superstars are, such as Zlatan, Cristiano Ronaldo, Neymar, etc… but I have a soft spot for the likes of Robben, N’golo Kante, Messi, Cavani, and others who share a more reserved, humble persona.

Perhaps the greatest example of Robben’s character is when he was in contention to win the 2014 Ballon D’or, competing against the two most highly regarded footballers of this era; Lionel Messi and Cristiano Ronaldo. Rather than making his case for why he should win the prestigious award, Robben humbly bowed out the race, stating that: “Cristiano and Lionel are two monsters. What they’ve been doing for six years now is unmatched. They are superior to everyone else. The recognition is nice and I am proud to be on the list, but I have never been obsessed about it. That’s just an individual accolade. And for me, only trophies with the team count.”

No one would have blamed Arjen for stating his case to France Football, given that the Ballon D’or is the greatest individual honor that a footballer could win. But once more, Arjen instead demonstrated his professionalism and honesty by stating who he believed to be the rightful winner.

As for online popularity, one may simply call Arjen outdated or behind the times, but his lack of social media activity could also demonstrate how modest the superstar is. Robben currently has over 1 million followers on Instagram, and nearly 80k followers on Twitter, despite only having posted one photo on the respective platforms. Robben has never cared for the limelight, fame, or individual praise, but he has always made it clear that he plays for his family, teammates, fans, and self.

Selfishly, however, I do hope that Arjen becomes a bit more narcissistic, now that he has retired from football! No matter how egotistic or humble an athlete is, loyal fans will always want to follow their career and life following retirement. It would also be an added joy to see Arjen delve into the realm of coaching or management, given that his personal attributes and passion for the game could translate well for him as either role.

On the pitch, Arjen certainly demonstrated his leadership, particularly during the 2014 World Cup, even though he was not named captain until his teammate Robin Van Persie retired from the International stage in 2015. In a decisive 2–0 victory against Chile that allowed the Dutch to top their group, Robben acknowledged his teammates in a chilling post-match interview, stating that “we fight as lions, the orange lions. You don’t do it with 11. You do it with 23.”

If anyone is not yet convinced of Robben’s character, following a heartbreaking 2–4 semi-final defeat vs. Argentina on penalties, Arjen reflected on the collective Oranje effort that deserved better: “you can’t blame it on anyone. We did everything together. You win together, you lose together.” Robben would continue to praise the 2014 World cup finalists, stating that the match came down to penalties, but they converted theirs better. Rather than lashing out at his teammates that missed their penalties, or stating that they deserved to reach the World Cup final more than their opponents, Robben responded to a difficult moment with unteachable class.

Last but not least, in his retirement note, rather than reflecting on his individual career achievements, Robben humbly stated that “there is nothing nicer than playing for your country. I finally said goodbye after 96 caps. I was able to take part in six major tournaments and, in my last years, captained the team. Altogether an unforgettable time that I will always treasure.” Arjen Robben will have forever etched himself a legend of the game, and it is both the ups and downs that have solidified himself as such.

I will forever cherish Arjen’s lethal wing duo partnerships with Damien Duff for Chelsea, and Franck Ribery for Bayern Munich. I will forever cherish all of his international highlights and agonizing moments for the Dutch national team, despite not even being Dutch myself. I will forever cherish his 2013 redemption goal against Borussia Dortmund in the Champions League final. I will forever cherish the endless times he mesmerized defenders with his signature cut-inside technique, despite their knowledge of his intention to do so. To a legend of the game and forever my favorite footballer, Arjen Robben, even if you never read this article, I wish you a wonderful retirement and thank you dearly for all the memories.

Among your biggest fans,