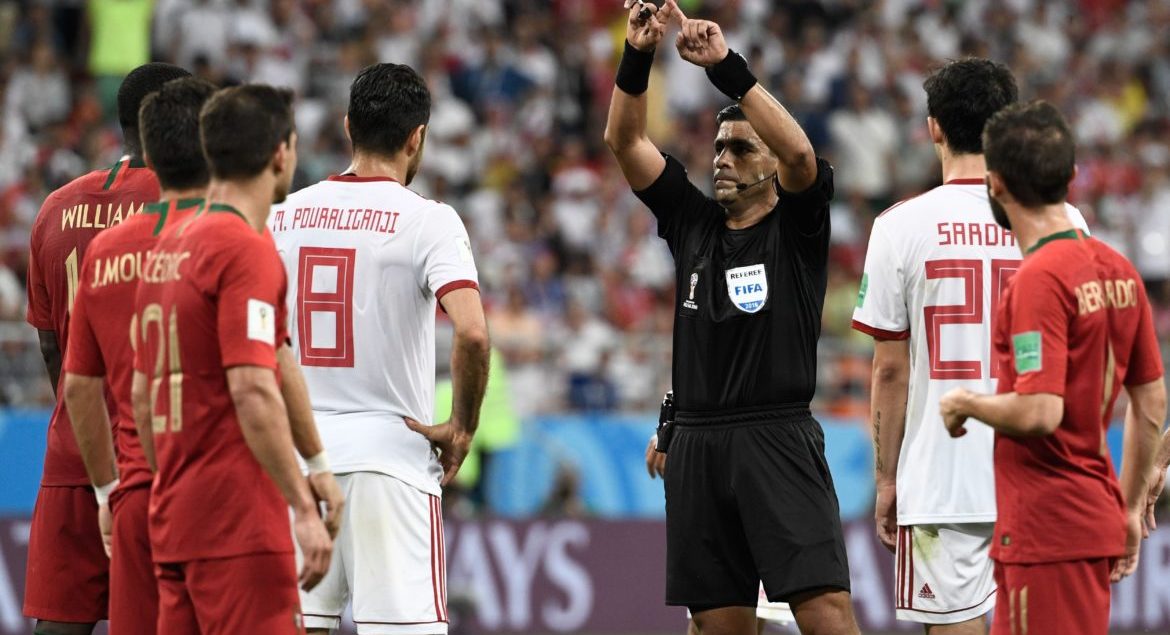 Thus far in the tournament, VAR has been doing its job without much controversy. It has been efficient when it had to be used in the moment, like when it overturned Neymar’s penalty appeal vs Costa Rica, and it hasn’t taken a while to administer a decision after the penalty given to France vs Australia. Most to all of the complaints about VAR come from fans whose team did not benefit from the decision made by VAR.

However, VAR’s limits were tested more than ever in the final matches in Group B. Spain, Portugal and Iran still had to perform over 90 minutes to secure a ticket into the Round of 16. While Spain were by far the best team in the group, their lack of focus in key moments meant they had to get a result to assure that they would play in the round of 16 and forget about the embarrassment of 2014. Even though Ronaldo’s hattrick vs Spain was heroic, it only resulted in one point. A draw was all Portugal needed against a stubborn Iran side to reach the knockout stage. And despite not even scoring a goal of their own in the first two games, Iran still had a chance to advance, even though the task was more difficult than the other two teams, by beating Portugal.

VAR was first used to give a penalty to Portugal after the referee reviewed a penalty call that he had missed during the game. It was a standard decision as the foul was clear and obvious, and calling the penalty after the review was the correct thing to do. After what appeared to be a Ronaldo elbow on an Iranian player was reviewed, Ronaldo received a yellow for his action. The action was hazy, it was soft to begin with, and it didn’t look deliberate. However, if the referee deemed it to be malicious, then Ronaldo should’ve been sent off. Perhaps Ronaldo’s superstar status saved him there, but the ref has to be strong in incidents like this one.

But the last minutes had fans at home viciously flipping back and forth to see the outcome of the VAR decision. We’ll start with Spain, who found themselves down 2-1 in the 90th minute. While they would still advance, they would go through as the second seed, and would face Uruguay, who did not concede a single goal in the group stage. They played a quick corner, and after a cross in the box, Iago Aspas’ back-heel leveled the game and put Spain in the 1 seed. However, the linesmen waited to put his flag up after the goal, which he is instructed to do, for an offside. Although it was close, the Spanish striker kept himself onside and secured Spain the top spot in Group B.

Essentially at the same time, VAR had much more to worry about in the other game. A ball was put into the box and was headed down by an Iranian player and appeared to go off of the arm of Cédric. In my opinion, the replay was not clear and decisive enough to overturn the no-call that was given in the game. However, the penalty was awarded, Iran converted, and Portugal now has the second seed, meaning they will now face Uruguay. The penalty decision surprised me; on FIFA’s official website this is the definition for penalty decisions: “The role of the VAR is to ensure that no clearly wrong decisions are made in conjunction with the award or non-award of a penalty kick.” The handball, in my view, was not “clear” enough to overturn the initial referee decision. If this becomes a recurring act, FIFA must change the rule or remind referees of the rule.

Love it or hate it, VAR is here to stay. The past match-day shows how influential it is in the game and how it can change the course of tournaments. Whether it will benefit or destroy Portugal and Spain in the knockout stages we don’t know, but we do know VAR had a hand in the outcome.