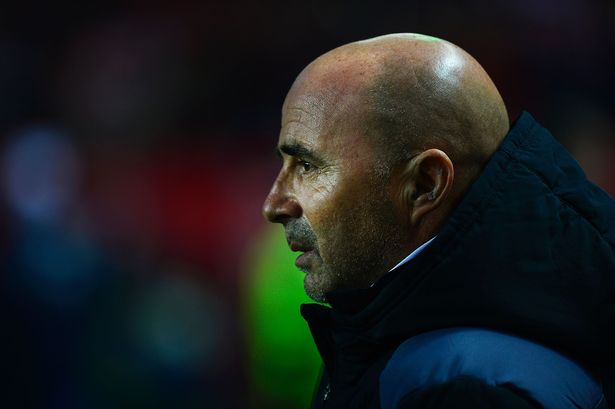 In nearly 8 months, Jorge Sampaoli has revolutionized a squad that few believed in, changed the mentality of the Sevilla fanbase, and did it with all with his own stamp that has defined the experience.

With the indispensable help of Monchi, Sevilla’s sporting director, the Argentine manager brought in players of vital importance to develop his idea. One of those is Samir Nasri, who, after joining Sevilla, has given explosiveness to the attack, becoming the conductor of the team’s fluidity. The Frenchman is in charge of linking the defense with the attack, controlling the football of Sevilla’s compact side.

At the start of the season, the tactical set up was a 4-1-3-2, or a 4-2-3-1 depending on if Ben Yedder or Vietto played, or both. After realizing that his team was too exposed defensively, Sampaoli shifted to a 3-5-2. The change was brought about because, when the team attacked, the 4-man defense shifted to a 3-man backline, giving attacking freedom to one of the fullbacks and defensive responsibility to the other fullback.

The fullback’s natural instinct is to go forward and link up with his teammates, and the fullback with defensive duties will also complete the attack, leaving the other two defenders exposed. Naturally, it is a given that the best way to defend is with three center backs, as center backs are automatically programmed to defend before attacking.

In order to correct your mistakes, you must have suffered its consequences first. The Sampaoli-Lillo duo learned from this mistake and now we see a compact team that isn’t divided between defense and attack, becoming a free-flowing team. In Espanyol’s first goal, we observe Pareja and Kiyotake running behind the ball, leaving N’Zonzi and Mariano exposed. Because of this failure to get back, Sevilla defends with numerical inferiority.

We also see that there is not a midfield to support the defenders in the final third and stop Espanyol’s attackers. In Espanyol’s 3rd goal, we observe Sevilla’s final line of defense hand in hand against Espanyol’s attackers. Mariano is forced to cover whoever has the ball, Pareja has to concentrate on his man and where the ball will go. Espanyol’s attackers double up on each side of N’Zonzi, who has to mark the zone, letting Leo Baptistao and Diop free.

These types of mistakes were recurring throughout the first few weeks of La Liga. Later, it was Sevilla’s turn to fight off the Champions League’s finest, and against Juventus in Turin, we saw a more compact Sevilla, but also one that gave signs of the Castildense’s (Sampaoli) idea.

Another piece of the puzzle which has been vital in developing the Argentine’s system is Steven N’Zonzi. The team lacked pausa, they needed a steady balance, and the shift from a 4-man backline to a 3-man defense liberated him, reaping the best out of this player. The Frenchman controls the build-up and the variety in attack, essential traits for the team that Sampaoli wants, where possession and verticality of the highest order are needed. When Sevilla played a 4-man backline, there was a large gap between defense and midfield. N’Zonzi tends to position himself between the center backs, leaving a lot of space in the middle. Here is where Nasri’s arrival makes all the significance in making N’Zonzi’s job easier. When he finds himself marked out of the game, unable to aid in build-up, N’Zonzi gives the ball to Nasri, who is in charge of dictating the other ¾ of the pitch. This partnership between the Frenchmen gives a calmness and harmony to the team, which has become a compact side due to the duo.

The work of the team off the ball is brilliant. Their organization in marking and positioning is admirable. Depending on the occasion, the team defends close or far from their own box. Furthermore, one must highlight the work of Vitolo and Sarabia, who do backbreaking work with their constant attacking contributions and they also work together to recover possession. Each of these key players has their role: N’Zonzi in building from the back, Nasri in the attacking build-up, and finally, we have Vitolo, Sampaoli’s wildcard. When the Casilda manager wants his team to attack and press high, it is Vitolo’s duty, but when the priority is defending and waiting to hit their opponent on the break, enter Escudero to do the midfielder’s job.

Another concept that stand out in the red and white side is their versatility.

With Sevilla away from home, Real Madrid pressed to hinder Sevilla’s build-up. N’Zonzi drops back between the center backs to help the clean build-up from the back.

The use of a three-man backline liberates Iborra who originally played in a double pivot, and advances his position to that of a center forward so the team has more options in attack.

Madrid tries to congest the midfield by moving inside, giving Sevilla superiority on the wings. It is here where we can appreciate Sampaoli’s genius. “Disorganize yourself in attack in order to be organized in defense.”

It’s not about automatisms, but understanding each other. This is what we see in Sevilla, where the in-game tactical changes are understood by every player that Sampaoli sends onto the pitch.

Sevilla’s overflowing attack gains superiority through the wings, where Sevilla’s attack is centered on, leaving empty spaces in the middle of the pitch. The physical work of the players is impressive. Again, we see N’Zonzi in charge of building from the back.

The attacking of the wingbacks is key in generating superiority in attacking through the wings. Vitolo has a free role going forward. Normaly, he is found as a left wingback, but we have also seen him occupy the right side when the team needs him. In defense, Vitolo’s freedom is null; he is found through the middle to give more freedom to N’Zonzi in marking and positioning.

What Jorge Sampaoli is doing at Sevilla is a generational achievement. The great coaches work on a little bit of everything, they aren’t one dimensional, and this is what we see in a team that epitomizes this philosophy like Sevilla.

The coach tells the players the tactics, but it is the player who becomes in-tune with them through reiterated practice, where he is directed and corrected. Over the course of time, we have seen that a team does not always need substantial in-game management due to the players’ dedication to the manager’s idea.

Since the dawn of the game, football has had a fear of innovation. This makes the work of Sampaoli and Juanma Lillo all the more admirable. One can only thank them and continue enjoying this team, which in a few months has managed to become one of the most feared clubs of the old world, threatening the status of traditional football.
Some of the images used were from this video, which I personally recommend to better understand Sevilla’s style.
https://www.youtube.com/watch?v=uCMH2wwd82o