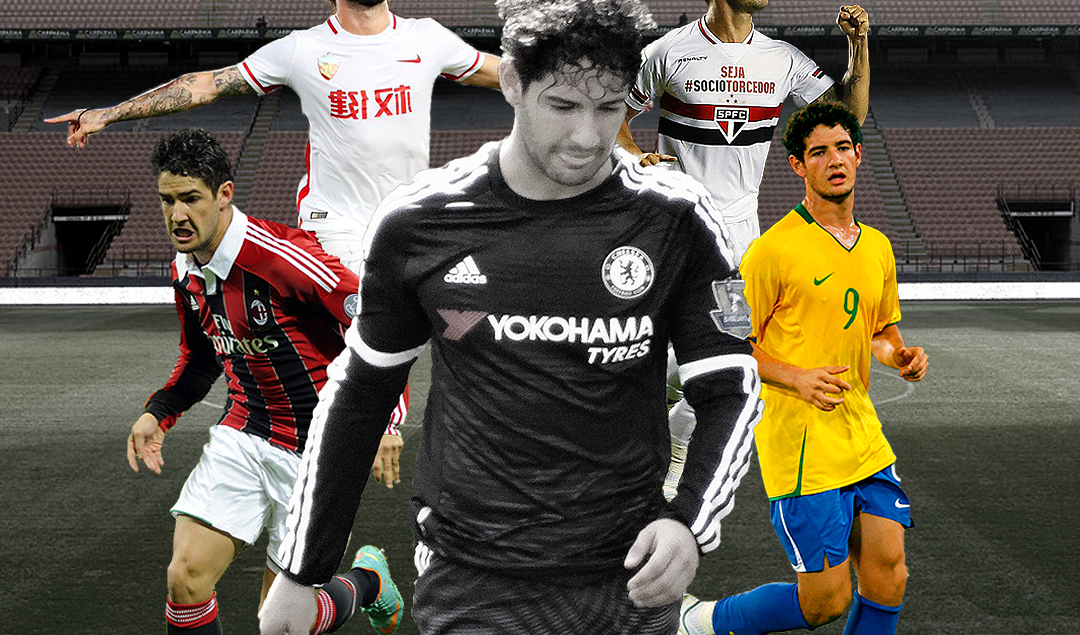 Many players have shown immense promise in their formative years, but ultimately failed to live up to the hype and expectations bestowed upon them by millions. Some fail due to poor attitude, some due to shady entourages, some due to cruel injuries. From Antonio Cassano to Ravel Morrison, a fair amount of players have enchanted the world with their skills as an early age, proving that they have the skills to rise to the top, before failing to come anywhere close to their potential for one reason or another. These players squandered their God-given potential, and instead of becoming legendary hallmarks of their generation, they serve as cautionary tales to talented prospects who are cutting their teeth at the top level.

Alexandre Pato falls into this category of once-exciting youngsters who fell off the path to stardom. Once dubbed a ‘wonderkid’ during his time at AC Milan, his journey to world class status soon took a wrong turn. The young forward struggled to live up to his early potential, and eventually succumbed to the allure of the cash-stacked Chinese Super League.

The fall of Pato was as quick as his rise. By the time he was 21, Pato had taken his homeland by storm at boyhood club Internacional, as well as leading A.C. Milan to their first league title in seven years. But injuries plighted his career, and perhaps the returning fear of losing out all together caused him to lose focus, as his career took an abrupt nosedive.

Born in Pato Branco, Brazil, a city in the southwestern state of Paraná, Pato faced a life-threatening situation at just 11 years of age. Before his footballing career had even begun, Alexandre Pato was at risk of losing his arm due to an undiagnosed tumour.

It was not long after recovering that he was picked up by Sport Club Internacional and integrated into their youth setup. But by just 16 years old, he was promoted to play in the Brasileiro Sub-20, a competition whereby the baby-faced forward was pitting his wits against players four years his senior.

Even at such a young age, Pato surpassed all expectations, as he showed he had all the components to be a complete striker. He merged pace and agility with incredible technical ability. Whilst not being the most physically imposing froward, his ability and accuracy in the air made him a threat in all situations.

A move to Europe was always on the cards for a player of such talent, and soon enough, AC Milan, the reigning champions of Europe at the time, paid a then-hefty sum of around €24 million for his services. The transfer was complete, but Pato was unable to play competitive matches for his new side until January 2008, when the Italian registration window re-opened.

When that day finally arrived, Pato hit the ground running. A goal on his debut in a 5-2 win over Napoli was the perfect start to life in a new team, a new city, a new culture. Finishing his first season in Milan with 9 goals in 18 Serie A appearances, he had rightfully earned his place in a side that contained a number of footballing greats. Milan finished a disappointing 5th, failing to advance past the Round of 16 in both the Coppa Italia and the Champions League, but Pato was one of the few players in the squad that didn’t disappoint Rossoneri supporters.

In his first full season in Europe, Pato, at the age of 19, finished as Milan’s leading goalscorer with 18 goals. Paolo Maldini and Kaká ended their glorious careers in Milan (until Kaká’s brief return in 2013), paving the way for Pato to step up as the true face of the club. Pato’s stock continued to rise, and he was soon given the #9 shirt after club legend Pippo Inzaghi retired at the end of the 2011-12 season. It was expected that Pato could handle the responsibility and continue on the goalscoring exploits of its former bearer, the man who spearheaded Milan to European greatness.

But the injuries that had plagued his previous season returned, and a troublesome thigh caused Pato to miss the first six weeks of the season. He was ultimately limited to just 18 appearances in all competitions, managing just four goals. The 2012-13 season proved to be the final one for Pato at Milan; in seven appearances the Brazilian scored two goals before a January move to Corinthians materialised. Taking his place? Mario Balotelli.

A return home was the logical move for someone who suffered from numerous muscular problems. Comfort was needed to rebuild what was still a promising career at 24. Pato had his best years ahead of him, and after scoring a goal with his first touch on his debut for Corinthians, he continued his trend of starting life at a new club on a high. Corinthians shelled out €15 million for Pato, which immediately brought with it pressure from the fans go deliver.

A poor game against Goiás, in which Pato missed two sitters, brought immense criticism from the Timão fanbase. Such was the criticism that now-Brazil manager Tite jumped to his defence;  “This pressure comes from his high transfer fee. But football is not only about money. If it was just about money, we would not have won Libertadores last year.”

The pressure continued to pile up on Pato from Fiel, the largest supporters club at Corinthians, after a poor performance saw him miss a host of glorious chances in a 1-0 defeat to Cruzeiro. Tite again attempted to protect his precocious forward. “He’s improved in precision. I asked for this after the game against Ponte Preta: ‘Target for goal’. Considering he shot in the direction of the goal and the rival goalkeeper had a good game, the coach is going to award recognition. I always look at the other side. It is necessary to recognise that Fábio [the goalkeeper] had a very happy game, it was his merit. If Pato had missed, I would ask him to improve. But today was Fábio’s merit.”

The final nail in Pato’s Corinthians-shaped coffin came in the Copa do Brasil, when he attempted a panenka chip to score the decisive penalty against Grêmio. But the striker got next to no power behind his shot, which former Milan teammate Dida comfortably saved, knocking Corinthians out of the cup.

Loan moves then followed for the forward, to São Paolo and Chelsea, respectively. His time at São Paolo was more fruitful, netting 38 goals in 98 appearances. Such was his impact that Tricolor fans were furious at his departure, and even today, await his return. That red-hot goalscoring form earned him a January move to Chelsea, as Radamel Falcao had failed to convince as an understudy to an increasingly injury-prone Diego Costa. But Pato struggled to get match fit and made just two appearances all season, but did manage to get on the scoresheet once, against Aston Villa.

After his failed Chelsea spell, Pato arrived at Villarreal for €3 million, five times less than that of what Corinthians had originally paid for him. Immediately, just as he had done in Brazil and Italy, he took Spain by storm immediately. Just as Diego Forlán, Juan Román Riquelme, and many others before him had done, Pato revived his career, if only briefly, at El Submarino Amarillo.

With Roberto Soldado succumbing to a long-term injury, Pato and Nicola Sansone formed a promising duo up top in Fran Escribá’s side. Villarreal were flirting with a top four spot, and Pato seemed to finally be back.

If we’ve learned anything from Pato’s career, it’s that things don’t turn out like they’re supposed to–or expected to. After flying high once again, Pato decided to cash in on the Chinese Super League’s astronomical wages and signed for Tianjin Quanjian, with Villarreal receiving €18 million. Perhaps nothing sums up Pato’s mercurial genius than his aforementioned transfer fees: he’s so talented that Corinthians felt it necessary to invest €15 million into signing him, that Villarreal felt they could revive a fallen start at the tune of €3 million, and that after a half-season, Villarreal sextupled their profit on him.

He was amongst a flurry of Brazilians who were attracted by the riches of China, some, such as Oscar, admitting the money would help him save his family from the poverty line back in his homeland.

Pato claimed his intentions were good. He wanted to help grow the name of Chinese football, as well as the brand of the CSL. In an interview with CGTN, he claimed: “I’m convinced that the Chinese league is growing,” noting that Chinese club owners have been making huge investments to boost the CSL’s “consistent development.”

“Due to that, the level of Chinese football has the potential to reach almost the same as we see in Europe, Brazil and other major football countries,” Pato said. “I’m strongly convinced that I’m here to help with this mission.”

Life in China did not begin as Pato would have hoped. His coach at the time was Italian legend Fabio Cannavaro, who put immense faith in the Brazilian. Alongside Axel Witsel, Pato was seen as the signing who could lead Quanjian to greatness.

But his debut resulted in several spurned chances, and ultimately a 2-0 loss, to Guangzhou R&F. He soon missed a late penalty in a 1-1 draw with Shanghai Greenland Shenhua which denied Quanjian their first ever Super League win. However, Pato soon found his feet, and scored a total of 15 goals in 24 appearances for the club. The following season, in 2018, he managed a near-identical record.

Things have more recently turned sour at Tianjin Quanjian. The club’s owner has been arrested due to alleged pyramid selling and false advertising. Specifically, Quanjian’s owners, self-styled experts in traditional Chinese medicine, came under fire for their treatment of a young cancer patient. The young girl was taken off chemotherapy and instead received company-produced remedies. She died in December 2015, and after public outcry with the story being brought to light last month, Quanjian’s founder Shu Yuhui was arrested, along with 17 staff members. Quanjian was dissolved, but soon re-emerged under a new name, Tianjin Tianhai F.C.

The club’s future is in doubt, as is Pato’s. A return to Milan has been squashed by the big-money arrival of Krzysztof Piątek, but São Paulo fans still hold out hope that their prodigal son makes his long-awaited return.

A career that promised so much, but returned so little in comparison. Many are ridiculed for their choice to travel to China and play for money over success and “sheer love of the game,” whatever that means, but Pato nearly lost his opportunity when he was just a child. Perhaps the fear of losing it all again after such a horrific run of injuries forced him to skip the rainbow and head straight for the pot of gold.