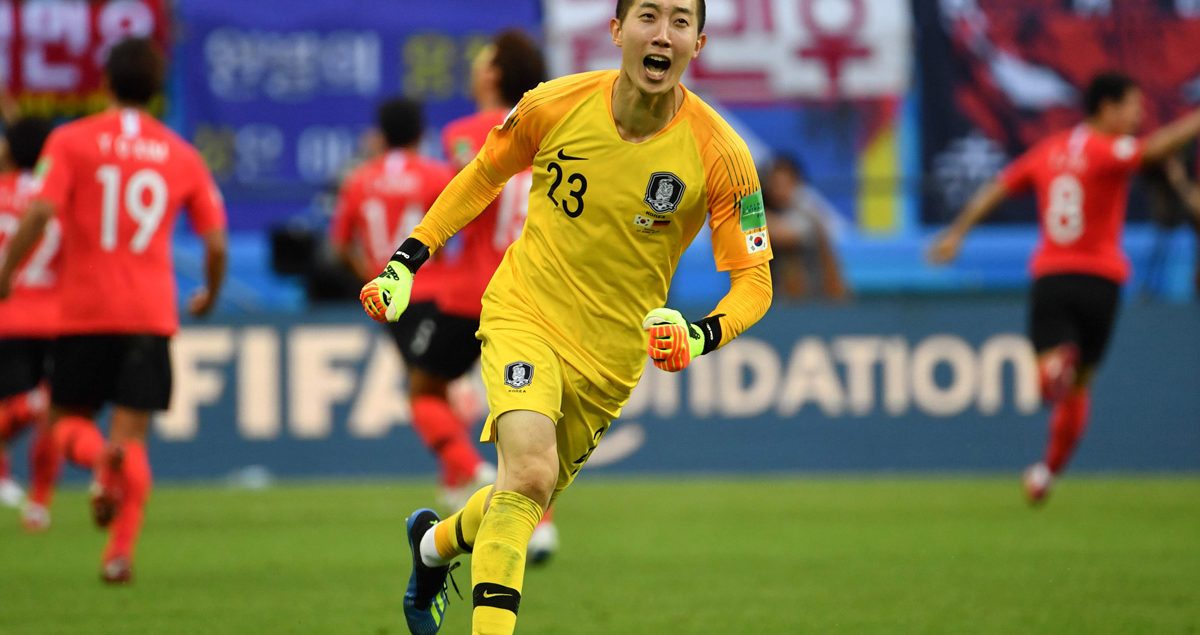 Cho Hyun-woo entered the World Cup as South Korea’s third-choice goalkeeper, and left as one of the breakout stars of the group stage. Now, at 26, he’ll be forced to either win the Asian Cup or Asian Games, or fulfill two years of military service.

Entering the 2018 World Cup as the third choice goalie for South Korea, not much was expected of the 26-year-old K League shot-stopper. However, after putting in a MOTM display against Germany, the whole world seems to be impressed and curious about Cho and his story.

Born in Seoul in 1991, a 12 year-old Cho experienced the 2002 World Cup firsthand as the whole country of South Korea was swept into footballing fever. The 2002 World Cup was co-hosted in South Korea and the host nation managed to go all the way to the semifinals, before getting knocked out to Germany. This inspired millions of Koreans to pick up football and Cho was no different.

After graduating high school, Cho made the surprising decision to join Sunmoon University instead of playing for a club. When asked as to why he decided to go to Sunmoon in 2015, Cho stated that he wanted to play as much as possible and also due to a Brazilian coach he worked with in high school.

In 2013, Cho was selected by Daegu FC in the 2013 K League draft where he has played since. The reason Cho decided to join Daegu instead of a bigger team was the same reason why he decided to join Sunmoon; to get as much playing time as he could in a smaller team. Cho made his debut four games into the season, keeping a clean sheet, but Daegu decided to bring in an experienced goalie instead and were relegated. In 2014, Cho was called up for the 2014 AFC U22 Championships, but he was unable to take part due to knee surgery, and was forced to watch on as South Korea won gold medals and military exemption as a result of winning. In 2015, Cho battled past injury and was voted the best goalkeeper in the 2015 K League Challenge season. However, while it was a good year for Cho, Daegu missed out on promotion and remained in the second division.

In 2016, Cho was once again voted the best goalie in the second division and somehow managed to only concede 35 goals in 39 appearances during the season, successfully helping Daegu to promotion. In 2017, newly promoted Daegu were everyone’s pick for relegation but behind Cho’s immense performances, Daegu finished 8th and clear of relegation with Cho instrumental, conceding only 48 in 35 appearances. Cho was named best goalkeeper in the K League, and would go on to make his first international appearance for the national team. In 2018, Cho had high expectations on him and struggled a little as Daegu are bottom of the table currently. Cho was still selected to the World Cup squad, becoming the first Daegu player to make it to the World Cup. The rest is history.

Heading into the World Cup as the third choice goalie and likely not to play a minute, Cho was surprising chosen to start the first match because he was the tallest out of the three goalkeepers on the squad. Despite losing against Sweden, Cho put in a stellar performance, and retained his spot for the next match against Mexico; where he also performed well against despite losing. Heading into the final game against Germany as massive underdogs and needing a miracle to advance, Cho put in a man of the match display, making strong saves to deny the reigning world champions, before South Korea scored two late stoppage time goals to dump Germany out of the World Cup. In the end, South Korea were still knocked out (due to Mexico losing 3-0 to Sweden), but left Kazan as national heroes and with nothing to be ashamed of. Cho received praise from around the world and it will be interesting what he does next in his career.

Speaking to ESPN FC a few days before the match, Cho stated, “I would like to play in Europe one day, and especially in England. There you can face the best strikers in the world and really improve as a goalkeeper.” His dream may turn a reality soon as Liverpool are reportedly interested but he still faces a major hurdle in his career. All able-bodied Korean men are required to serve in the military and players such as Son Heung-min are required to do the same. The current required length is as follows: 21 months in the Army/Marine Corps, 23 months in the Navy, or 24 months in the Air Force. After completing service, the men are required to attend a few days of annual military training for 6 years. The only way Cho Hyun-woo and his Korean teammates could be exempt from this requirement is if they win the Asian Cup, which will take place in January, or the Asian Games, which will take place in August.

However, various reports say that it is unlikely Cho will make the squad for the Asian Games and therefore he would have to lose two years of his prime to military service. Whatever the future holds for Cho Hyun-woo, we hope he gets the chance to earn the exemption and get his dream move to Europe.