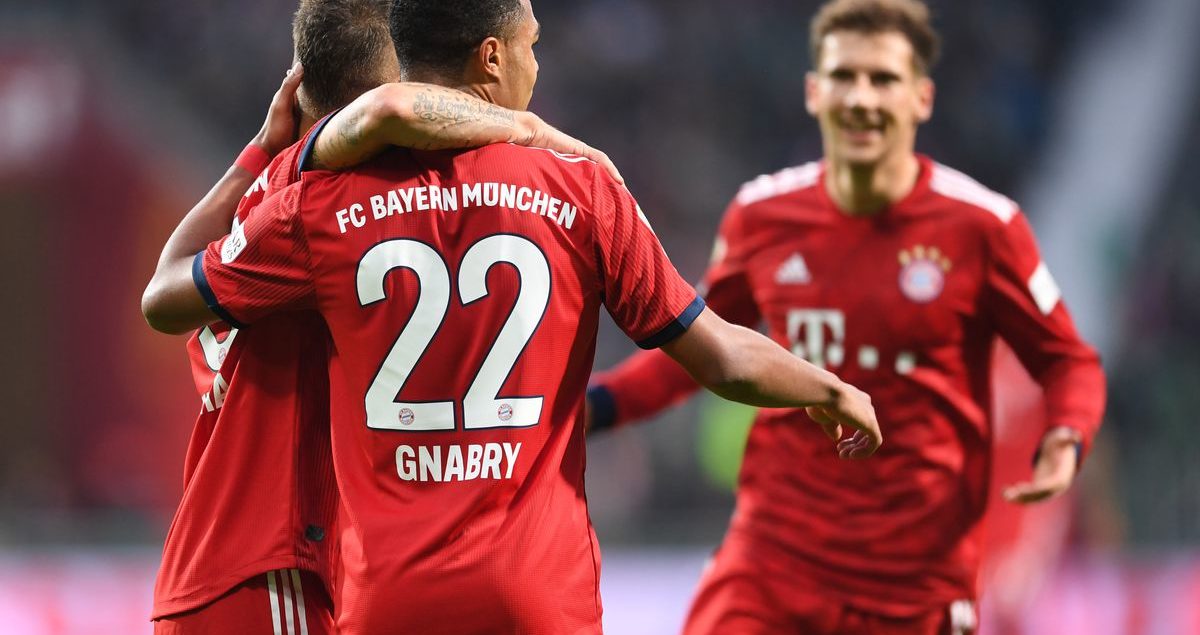 Amid a disastrous start to the Rückrunde from Borussia Dortmund, as well as an impressive return to top form from Bayern Munich, Niko Kovač’s Bavarians are now tied at the top of the table with Lucien Favre’s BVB, only two goals behind on goal differential. It appears, after an underwhelming Hinrunde, that FC Hollywood are back to claim what’s rightfully theirs. Still, there’s no denying that Bayern’s squad is aging and declining, and as indicated by the club’s higher ups, it’s time for a squad overhaul to prepare for the next generation.

Players like Arjen Robben, Franck Ribéry, Mats Hummels and Jérôme Boateng have all failed to live up to the expectations that were placed on them at the beginning of the season, and a summer rebuild looks to be very much on the books in Munich. While Kovač’s future remains up in the air, it’s almost certain that the veteran wing pair of Robben and Ribéry will finally leave the club this summer.

The departure of ‘Robbery’ marks the end of an era for Die Roten, and it should come as no surprise that President Uli Hoeneß is expected to make a big splash in the transfer market to renew and rejuvenate the defending Bundesliga champions. Nonetheless, Bayern’s board has already been planning for the future over the past few years, from the capture of RB Leipzig’s Joshua Kimmich in the summer of 2015 to last month’s purchase of HSV’s Jann-Fiete Arp. Whether they be essential starters already, like Kimmich, or precocious teenagers waiting to refine their skills before joining, like Arp, Bayern have shrewdly built a young spine capable of maintaining their monopoly on German football.

The 23-year-old has been an absolute phenomenon this season, and has been tipped as a Robben-type player who prefers terrorising defenders from the left wing. This however does not do justice to the former Arsenal youth product, as he is capable of playing anywhere across the frontline including as a No. 10, and his pace has become a real threat for Bayern during counter-attacks.

Gnabry is primarily known for his pace and fondness for going on solo runs from the flank, and the youngster relishes in leaving defenders trailing in his wake. He has a respectable output in the final third which stems primarily from his ability to cut inside and let fly on his right foot, and this skill appears to mirror Robben’s trademark move.

His speed, ability to pick out a through ball, and versatility across the frontline makes him a real threat to play against, but it is also true that Gnabry has his peculiar weaknesses. The youngster often goes on long dribbles when a pass would have been the easier option, but as he continues to be a first team fixture for Bayern, these errors will be eradicated sooner or later.

The 22-year-old Frenchman has long been considered to be Robben’s heir on the right flank, but persistent injury problems have seen the youngster spend more time on the treatment table than on the pitch. Coman’s biggest strength is his explosive pace which seems to almost teleport him to different areas of the pitch, but it also makes the French international extremely one-dimensional in his play.

Coman’s primary skill is to stroke the ball in front of a defender and then beat him to it using his pace, which is a trick with a short shelf life and even less efficacy. Right now, he seems closer to Douglas Costa than to Robben as far as contributions in the final third are considered, though there are hopes that he will improve his decision-making over time.

The best way to describe 24-year-old Goretzka would be to call him a new age, poor man’s Steven Gerrard. Having experience in both in attacking midfield and in central midfield, the German possesses exquisite vision when it comes to placing through balls or knocking passes over the top, but his real contributions come from his off-the-ball movement.

The German is a hard-tackling midfielder who is capable of releasing players from deep and switching play from his position at the base of the midfield, and these qualities make him valuable for a team that prioritises fast, direct and vertical play (like former club Schalke 04).

The courageous youngster is a natural leader on the pitch, drawing similarities to Gerrard and club legend Bastian Schweinsteiger. He goes into each tackle with commitment and is extremely efficient at tracking back and winning the ball, and this ability to marry offense and defence ensures that he will be an integral part of Bayern’s midfield machine for seasons to come.

Bayern’s most expensive transfer signing arrived at the club from Lyon in the summer of 2017, and his box-to-box qualities are a throwback to the age of Schweinsteiger. The Frenchman is renowned for the timing of his runs into the box which enable him to finish off team moves, and he possesses an impressive heading ability which further enables him to maximise the profit from his runs into the box.

He has the ability to play line-breaking passes from the centre of the midfield but is better used as a battering ram in attacking midfield, perhaps best used next to Goretzka in the new iteration of Die Roten. Goretzka’s defensive solidity will allow him to cover the space left behind by the Frenchman’s marauding runs into the box, which is a bonus when Tolisso’s general negligence towards defensive duties comes into consideration.

The recipient of the 2016 Golden Boy award has had a topsy-turvy career so far, with the highest of highs being offset by the lowest of lows that can befall a youngster. While there were fears that his disastrous loan spell as Swansea had shattered his confidence for good, the Portuguese returned to Munich and has slowly been rebuilding his career in Bavaria, and many have backed him to recapture the form he had shown for Benfica and Portugal in 2016.

The 21-year-old’s incredible stamina brings to mind France’s N’Golo Kanté, a player with similar levels of energy who seldom seems to tire even after having playing a full season’s worth of games. This stamina, combined with the youngster’s versatility in midfield, makes him an important piece of Bayern’s future, and his gradual return to form should be a cause for worry as far as the rest of the Bundesliga is concerned.

The 18-year-old Canadian joined Bayern in January from MLS side Vancouver Whitecaps, and his impressive pace and dribbling ability point to him being a player in the mould of Ribéry. The youngster prefers playing on the left of the pitch and boasts explosive pace to beat defenders. Combined with seriously impressive dribbling that enables him to beat opponents in 1v1 situations, Davies is one of the most exciting homegrown talents to emerge from MLS.

Despite his pace, Davies is susceptible to being bullied out of the game by physical players, and it is something he will have to master if he is to become a crucial part of Bayern’s future.

The 23-year-old giant has already made a name for himself as one of the brightest young defenders in Europe, and it is a reputation that was gained on the back of four impressive seasons with 1899 Hoffenheim. The youngster’s immense frame may give the impression that he is a slow, lumbering player, but the reality is that only Coman can match his top speed at least as far as Bayern’s first team regulars are concerned.

The 23-year-old has a propensity for tackling as well as in bundling players off the ball, skills which have tended to frame Süle as a classic ‘throwback’ defender. Nonetheless, his ability to play out from the back is an underrated part of his overall game, though it is admittedly nowhere near the kind of quality displayed by Hummels and Boateng.

The World Cup-winning Frenchman is not in the squad this season but has agreed a deal to a move to Die Bayern next season, a wise coup for the reigning Bundesliga champions. Pavard is a versatile defender who, despite being a natural centre-back, can also play at right-back, and his runs down the flank have often been seen to give his teams a different dimension in attack. The most notable aspect of Pavard’s game is his phenomenal positioning when isolated in 1v1 situations, as the Frenchman uses his body to great effect to prevent an opposition winger from cutting in or making an incisive pass.

This ability against a lone man is the result of days spent as a right-back on the training pitch as well as in actual games, and marks him out as a player with a different style when compared to future teammate Süle. But just like Süle, Pavard must improve on the ball if he is to build a defensive partnership capable of replacing Hummels and Boateng.

Despite having the ability to penetrate defences, Pavard generally takes the easier option to pass out to his full-backs, with caution being ingrained into his natural game. He will need to improve this aspect of his game if he is to succeed at the top level, and in doing so, he should study Bayern’s aforementioned defenders, Hummels and Boateng, who were the gold standard at bringing the ball out from deep for many years.

With such talent in their ranks, it is no wonder Hoeneß is relaxed when it comes to dealings in the transfer market, and this perception is only reinforced by the fact that established veterans such as David Alaba, Joshua Kimmich and Thiago Alcântara are still entering their prime years. With raw talents such as center back Chris Richards, goalkeeper Christian Früchtl and forward Jeong Woo-yeong lingering in their reserves, it’s safe to say Bayern have wisely built for the next generation.

Still, rumors abound with Chelsea’s Callum Hudson-Odoi and Atlético’s Lucas Hernandez being reportedly keen on joining the Bavarians, and Bayer Leverkusen’s mercurial gem Kai Havertz has been eyed as well. However, their primary target should be RB Leipzig crown jewel Timo Werner.

The 22-year-old boasts an ability to interpret spaces on a pitch that rivals that of Thomas Müller, and he uses his explosive pace to get into goalscoring positions on a frequent basis. Werner is versatile and has played across the frontline for club and country, but his most natural position seems to be that of a playmaking No. 9.

The Leipzig man is generally seen hugging the touchline and making sudden runs into space between the centre-backs and the full-backs, which enables him to reach the ball in dangerous shooting positions. His weak point seems to be his passing, especially in his lay-offs to players when he drops deep from his focal point position. He will need to improve his passing in order to really establish himself as a creative No. 9, and Werner must study established stars such as Real Madrid’s Karim Benzema and Atlético Madrid’s Antoine Griezmann in order to reach his potential.

Robert Lewandowski is still the top scorer in the Bundesliga, but at 30 years old, Die Roten will quickly need to find a striker who is capable of filling the Pole’s boots effectively and consistently. Having already accumulated a wealth of experience at club and international level at the young age of 22, Werner fits the bill perfectly, but the Munich-based outfit will need to move quickly to fight off interest from Manchester United and Liverpool.