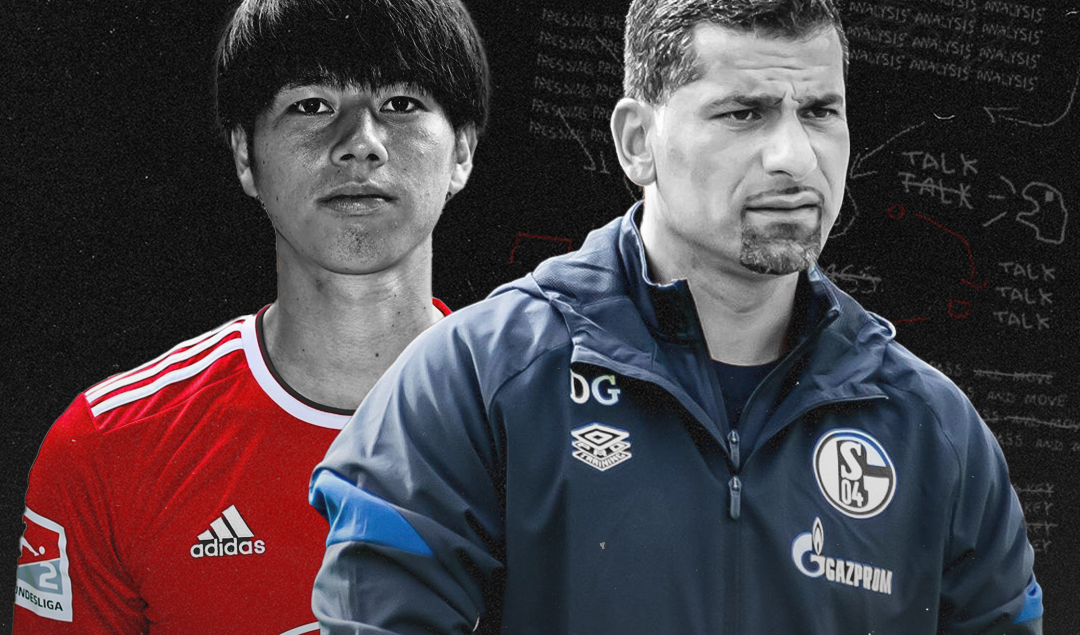 The footballing world has barely recovered from the European Championships, and yet the domestic season is already here, with Germany’s second division starting today. Another 38 gameweeks of gut-wrenching drama is upon us, impossible to call, yet still certain to end with Hamburg failing in the most spectacular of fashions at getting promoted.

Whilst the Bundesliga carries all the glitz & glamour of German football, it is one rung lower where the nation’s heart and soul lives. Packed with history, culture, and terrace mayhem, the Zweite Bundesliga is guaranteed to be the most entertaining league in Europe this season!

On July 23rd, Schalke 04 host Hamburger SV at the VELTINS-Arena. It isn’t a cracking fixture in the race for a Champions League spot, nor a knockout tie in the UEFA Cup. Instead, it’s the opening game of the 2021/22 Zweite Bundesliga season, a damning indictment of how far these former giants have fallen.

With 13 meisterschale, 7 Pokals, and 2 European titles, S04 & HSV rank amongst the most successful sides in history, yet next season they will be just the glamorous jewels in a second division steeped in history and significance.

Of the top 20 teams in the Bundesliga’s all time league table, 10 of them will play outside of the topflight this season, with the seemingly indomitable pair of Bayern and Dortmund chased down by none other than Werder Bremen and HSV in third and fourth. 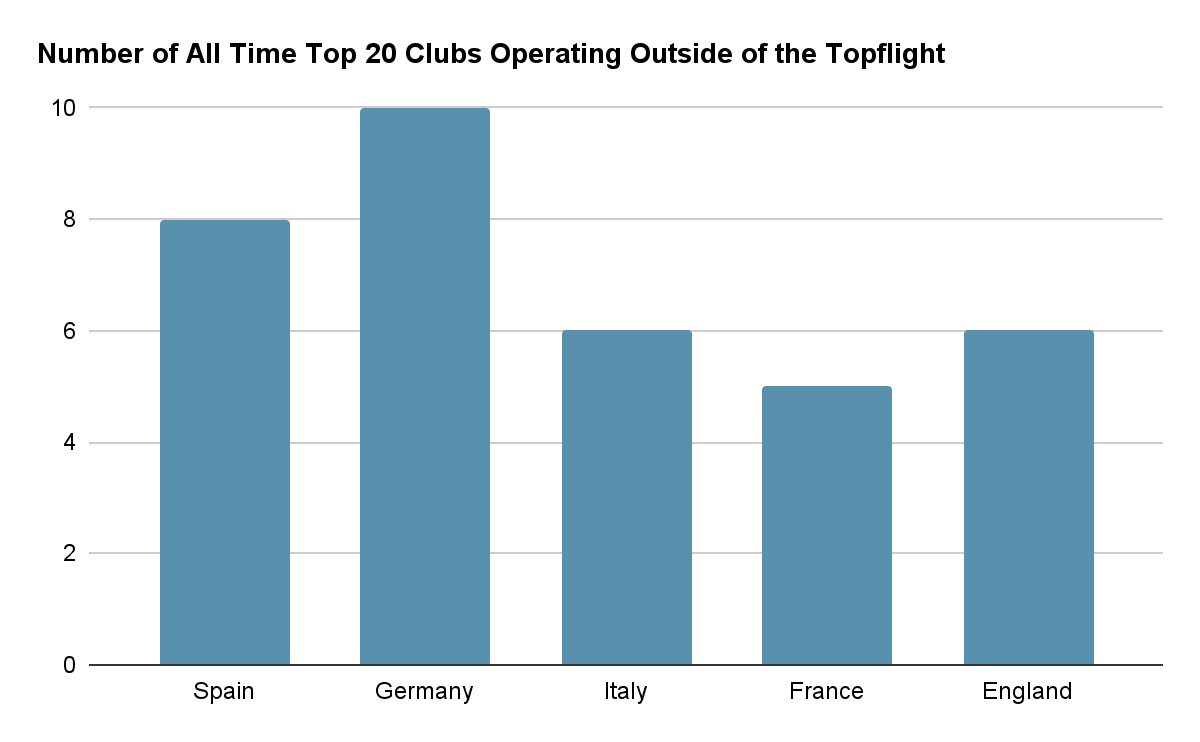 The sheer quantity of former trailblazers operating in Germany’s second tier is unmatched in any of Europe’s other top five leagues. The Zweite Bundesliga will not just be a breeding ground for young talent and spectacular football, but also one where the game’s purists can be transported back to the days before television rights and financial greed took over the sport.

The nostalgia doesn’t just end there though, with fans of the DDR-Oberliga – the East German topflight from 1948 to the country’s reunification in 1991 – happy to see Hansa Rostock and Dynamo Dresden promoted to the topflight. Whilst neither Hansa nor Dynamo have combined for much success since joining the national league, their dominance in the DDR-Oberliga means they still carry a formidable reputation and fan-base wherever they travel.

7 of the top 8 finishers in last season’s Bundesliga changed their manager over the summer, a wild statistic that one will be hard-pressed to find anywhere else on the continent. The Zweite Bundesliga isn’t exactly bucking the trend however, with 9 of the 18 clubs entering the upcoming season also making changes in the dugout.

33-year-old Aleksey Shpilevski takes over the vacancy at Erzgebirge Aue, fresh off winning the Kazachstan first division with Kairat Almaty, whilst another youngster in Christian Preußer (37 yrs.) has been thrust into the Fortuna Düsseldorf job.

A month removed from promoting Freiburg II to the 3rd division, Preußer will now have an opportunity to work with more young talent in a side rearing from promotion back to the topflight. 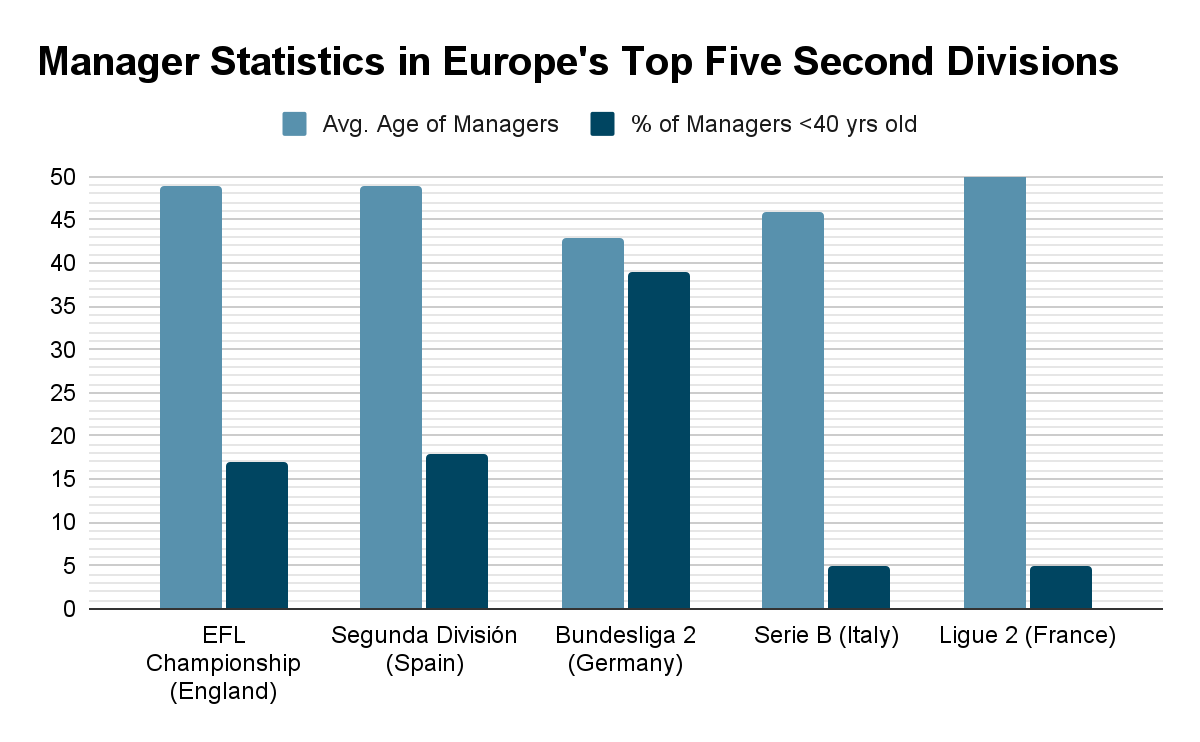 Shpilevski and Preußer are amongst the youngest managers in Europe next season, but they are by no means outliers in the 2nd Bundesliga, where 7 of the 18 teams have a manager under 40 years of age. No other second division even comes close to replicating this feat.

33-year-old Aleksey Shpilevski is a baby-faced debutante when it comes to the managerial game, but at least he isn’t the only one, with Holstein Kiel’s Ole Werner just a couple of months older than his new competitor. Though Werner has never lifted silverware, his job at Kiel last season was eye-catching, knocking out FC Bayern en route to the Pokal semi-finals, and falling at the final promotion hurdle in a playoff versus 1.FC Köln.

We have seen Julian Nagelsmann eating up the headlines as Germany’s next great tactician, but the work Werner has done at Keil should see him leading the way as his competitor. It also wouldn’t be a Zweite Liga season without Frank Schmidt on the sidelines, the Heidenheim coach who is now entering his 14th season at the Voith-Arena.

Whilst the rest of the world seems to fire managers on a monthly basis, it is a reassuring sight to see Frank Schmidt each season, a glaring symbol of the power of longevity and faith in the all too reactive world of European football. Having taken his boyhood club from the regional lower divisions to within one goal of topflight promotion, Schmidt has rightfully earned the legendary record as the longest-serving active manager in Europe.

On June 6, Germany’s U21’s lifted the Junior European Championships, an inspiring feat which bodes well for the talent development in German football. Of the 23 man squad which traveled to the two part tournament in Hungary and Slovenia, 8 played their football in Germany’s second division last season, and another 5 had previous experience in the league.

Yet the Zweite Bundesliga’s talent reservoirs expand far beyond just homegrown talent, with youngsters from around the world finding opportunities in Germany’s second tier. From Dusseldorf’s Japanese midfielder Ao Tanaka, to St.Pauli’s Nigerian international Afeez Aremu, the Zweite Bundesliga can almost guarantee that regardless of where you come from there will be a young talent which you can identify with next season. 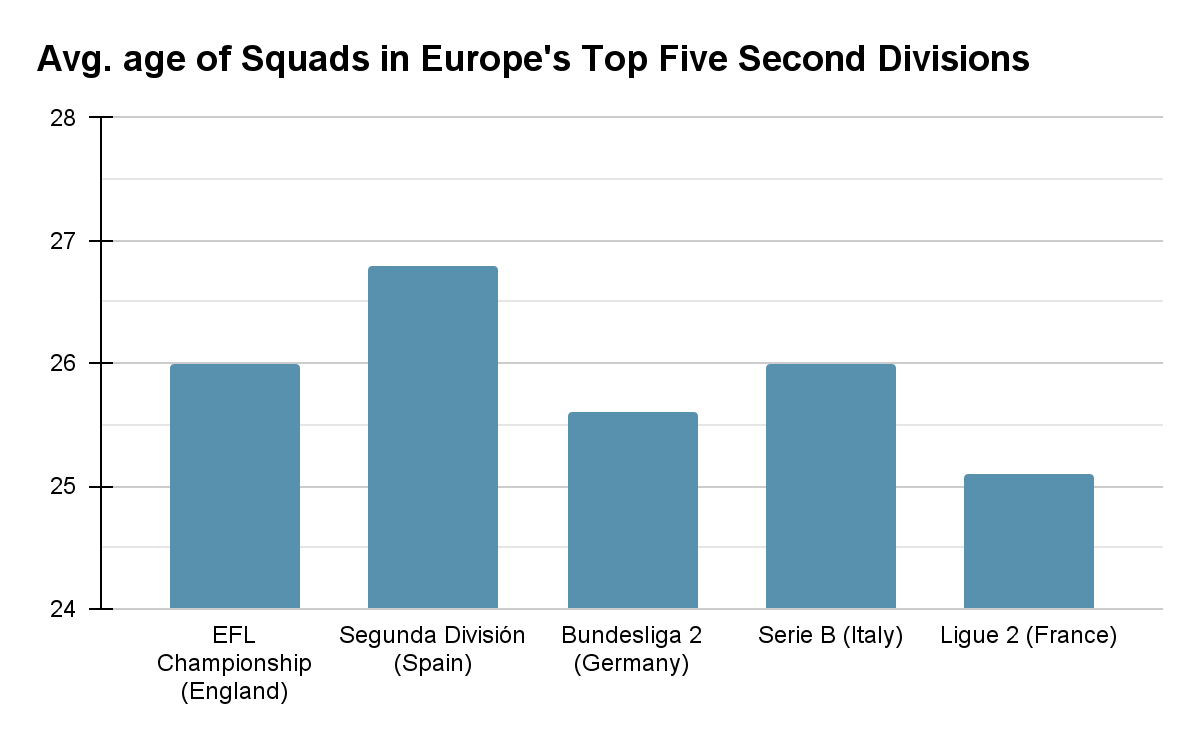 With an average age of 25.6, the Bundesliga 2 was the second youngest league of Europe’s top five second divisions last season.

If the young talent in the Zweite Bundesliga has piqued your interest but you are unsure who to support, then look no further than HSV. After three unsuccessful promotion attempts, Hamburg have finally discarded their quick-fix method of signing the best free agents available, and now want to rely on their academy system and scouting network to get back into the topflight.

With an average age of 24.9, Hamburg are the 4th youngest squad in the division, yet unlike those ahead of them, the youngsters are not just making up the numbers, but key cornerstones to build around. With academy graduates Josha Vagnamon (20), Stephan Ambrosius (22), and Jonas David (21), Hamburg have a trio which could form the heart of the side’s backline now, and in the foreseeable future, with only David yet to register 2000 minutes of 2nd Bundesliga action.

Further up the pitch is where Hamburg’s recruitment reaps its rewards, with La Masia graduate Ludovit Reis (21) potentially anchoring midfield alongside Belgian youth international Amadou Onana (19). Both were signed on free transfers; astute business which sets Die Rothosen up for long-term sustainability, as well as a fighting chance at promotion this season.

Of course, there is no need to go to the second division of German football for young talent when the topflight is amongst the best in the world for just that, giving more minutes to U21 players than any of Europe’s other top 4 leagues. However, when it comes to competitive football, the Bundesliga doesn’t stand a chance in comparison to its less glamorous counterpart.

With Bayern entering their 9th consecutive season as Bundesliga champions, the second division offers much-needed rest-bite from the monotonous spectacle of watching the Bavarian’s halfheartedly lift the Meisterschale each year. 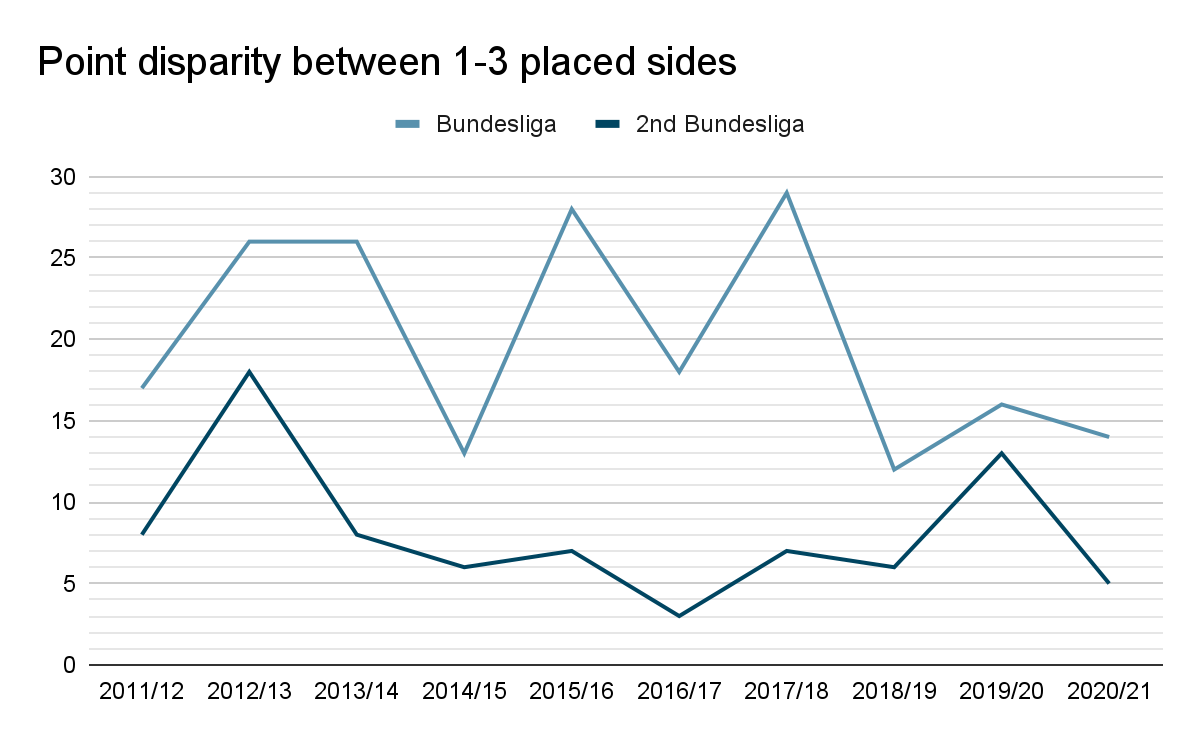 Whilst the last 3 seasons have seen Bayern challenged more intensely by the likes of Dortmund & Leipzig, there rarely is a true title race amongst 2-3 different clubs. Not to worry though, in the Zweite Bundesliga this is a feature that is almost commonplace, regularly featuring a promotion fight amongst 4-5 different teams as late as the final matchday.

In fact, the Zweite Bundesliga is such a competitive anomaly that it is often impossible to even come close to predicting its outcome based on the squads and personnel available. Despite the massive differences in financial power amongst a side that has just been relegated from the topflight to one that has been promoted from the third division, the market value of a team’s playing squad has consistently proven to be a poor determining factor of a side’s ability for success.

“When you think about the power many of the clubs have, there could realistically be more spectators in the Zweite Liga than the Bundesliga next season” (Alexander Rosen, TSG Hoffenheim Director of Football)

With electric crowds, standing sections, and a rejection of absurd ticket pricing, a Zweite Bundesliga matchday is one of the most unforgettable experiences any football fan can have.

Whilst we may not all be lucky enough to hold a season ticket at any of the 18 grounds, the songs, and chants practically bellow through the TV speakers, with it far from uncommon for the rowdy atmosphere to overtake a commentator in its wild enthusiasm. That is why no other empty terraces looked as heartbreaking as those across Germany last season, patiently waiting for the swarm of bodies to return.

Now that wait is finally over, with up to 20,000 fans due to watch Schalke’s opening fixture on Friday evening. Whilst the numbers are still a far way off what normally greets a 2nd division match, the spectacle and passion from those allowed in will elevate the fixture to an entirely new domain. 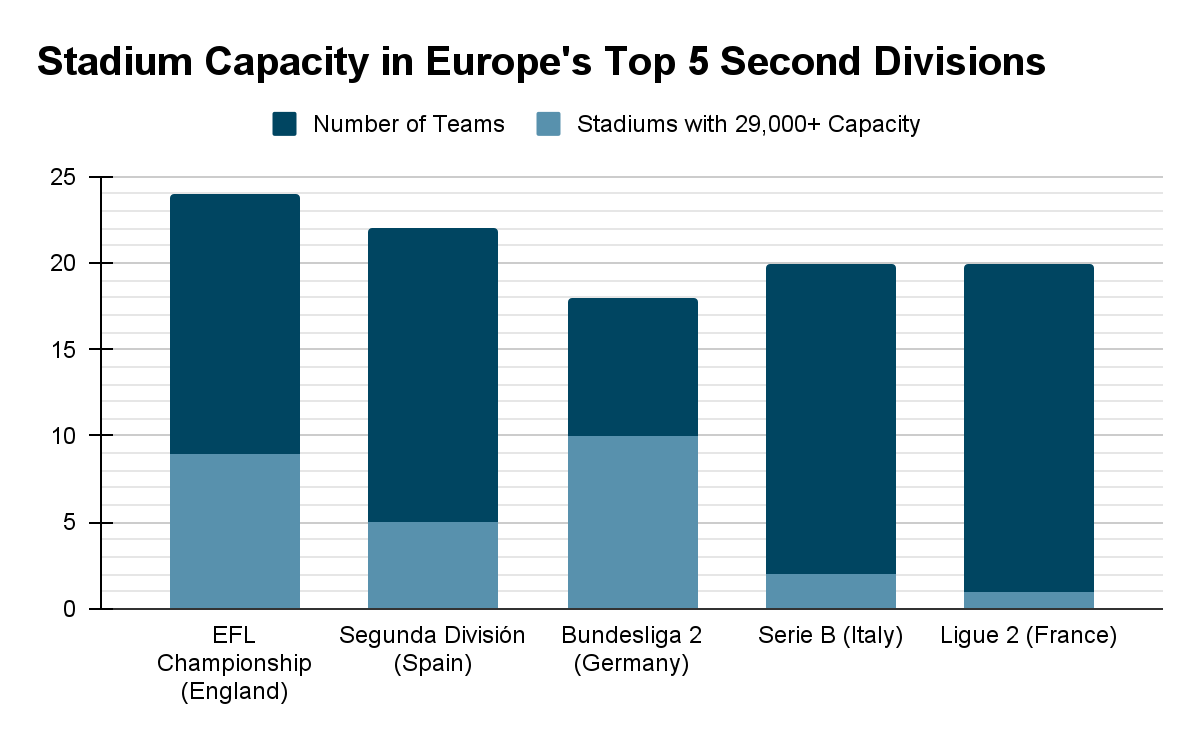 Germany doesn’t just have the most passionate fans in Europe, but they also have the infrastructure to back it up. With 10 of this season’s 18 stadiums featuring capacities upwards of 29,000, expect to see some of the most impressive tifos, chants, and atmosphere coming from the Zweite Bundesliga.

On any given weekend one can find a German football match with an electric stadium feel, whether it be a title decider in the Bundesliga, or a relegation six-pointer in the fourth tier. However, nothing compares to a derby, a match-up rife in this season’s Zweite Bundesliga.

Just 3 matchdays in we have perhaps the biggest spectacle of them all, with St.Pauli hosting city rivals Hamburg in the 42nd edition of the ‘Hamburger Stadtderby’. HSV have always been the glamorous club in the city, but it is St.Pauli who have come out of recent derbies with the upper hand, winning 3 of the last 4. Expect a pyro show from the stands, and a match teetering on the edge of full scale escalation when these two foes meet under the floodlights at the Millerntor-Stadion.

We need to wait just a bit longer for the next grudge match, but it’ll be more than worth it when Bremen & HSV meet in the Nordderby on September 18th. Whilst HSV’s first encounter is all about the rights to the city, the clash between Bremen and Hamburg has always historically determined who is the greatest team in all of North Germany.

Not only was it a constant feature of the Bundesliga for almost 40 years, but the Nordderby was even an attraction on the international circuit, with both sides playing out a fascinating tie in a 2009 European Cup semi-final.

Whilst these two are the most prominent derbies the Zweite Liga has to offer, grudge matches between Karlsruher SC & SV Sandhausen, Hannover 96 & Bremen, Hansa Rostock & Dynamo Dresden, and Jahn Regensburg & FC Ingolstadt means there will rarely be a week which goes by without a cracking fixture to watch from the 2nd division.