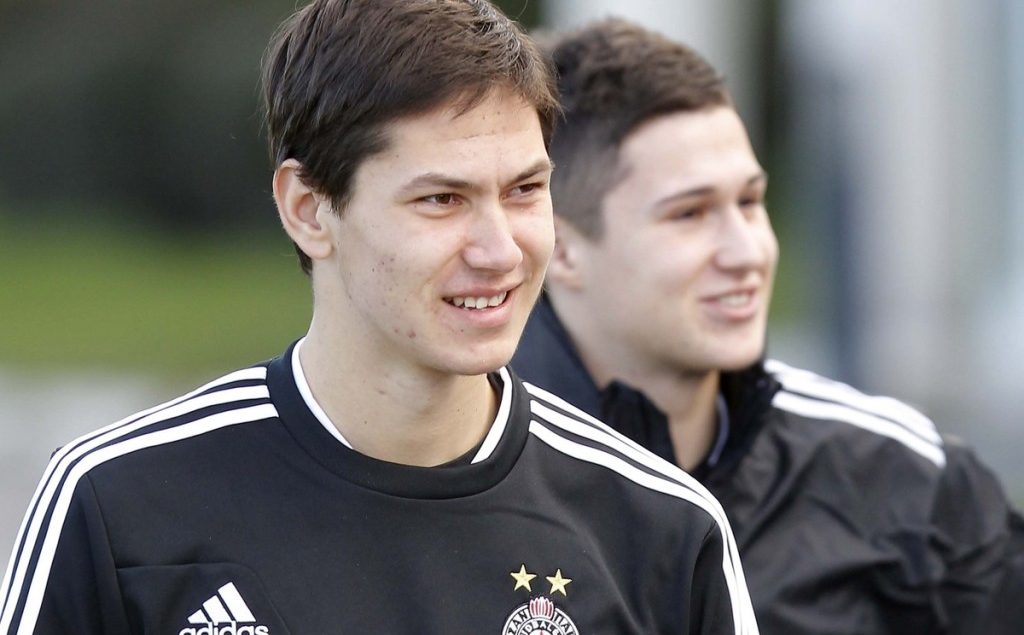 My love story with Saša Lukić began as long as two years ago, precisely on August 22, 2015. I was spending a couple days in the middle of Serbia, in the small town of Čačak, precisely – do not bother asking why. And as luck would have it, the local team Borac Čačak, which plays in the Sbrije Superliga, was facing none other than giants Partizan Belgrade. It was an opportunity I was not going to miss.

Without neglecting the club’s much more complex history and culture, which I could write about endlessly, Partizan is famous internationally for two main features: extremely passionate fans and the reputation of being a Balkan talent factory, much like Dinamo Zagreb in Croatia, or, to some extent, their Serbian compatriots and rivals, Red Star Belgrade. With this in mind, I enthusiastically ventured into Borac’s 5000-strong stadium, ready to witness some real Serbian support, and to scout for some talent.

Both factors met, if not exceeded, my expectations: the Partizan Ultras were outstanding, but we can talk about them some other time, and with regards to Partizan’s young talents, there were many on show that evening. Accompanied by some real Serbian aficionados, I was lucky enough to receive a heads up about the most interesting youngsters on display. The big guy up front was Ivan Šaponjić, spearhead of the Serbian U-20 World Cup victory that summer and later bought by Benfica. That other striker, by Ivan’s side, was Andrija Zivković, who would also eventually be swiped up by Benfica. And in the middle, in partnership with the experienced Stefan Babović, was a kid with long, tidy hair and somatic features: ‘that’s Saša Lukić, in the center, keep an eye on him’ – and so I did.

Throughout the whole game, which culminated with a convincing 3-1 victory for the Crno-Beli, I did in fact keep a close eye on all the Partizani talents. Though not the most noticeable player at a first glance, Lukić was able to showcase his numerous qualities. Slightly obscured by the more affirmed Babović, who was often picked as the preferred passing option in the middle, Lukić did not feature in the playmaker role, but rather as a mezzala, on Babovic’s side and without an excessively rigid collocation on the pitch. In this position, Lukic shone for his mobility and for his rapidity, physical as much as mental. He acted both as a tidy organizer, by often making the right passing choice when under pressure, and as an attacking threat, by moving into open space and continuously orbiting around Borac’s 18-yard box.

Indicative of Lukić’s respectable attacking prowess and ability to find space, the kid scored on that day, further captivating my interest towards him. After an efficient run towards goal, Saša was picked up by a through ball from winger Nikola Trujić. The youngster then proceeded to score the definitive third goal of the game, with a calm control and a cool right-footed finish.

My verdict at the end of said game was that Lukić was, paradoxically, both old-fashioned and a typical product of modern football. On one hand, he didn’t have impressive physical dominance, but rather impressed for his tactical awareness and ability to provide passing options for his teammates. On the other, he was also able to combine an efficient defensive phase with a considerable attacking contribution – like the modern box-to-box. Though my evaluation was fundamentally accurate, it didn’t encompass other qualities, which were then obscured by Babović’s presence, but that Lukić has since revealed.

One year after that evening in Čačak, I was delighted to read that Torino had bought the youngster, for approximately 1.5 million euros. And during his time in Italy, from July 2016 until now, Lukic has demonstrated some characteristics that I hadn’t initially foreseen, in spite of his limited game time.

His Serie A debut came on 17 October, as a substitute for Mirko Valdifiori, thus occupying in the deep-lying regista position in the center of the park. Expecting to see him play virtually anywhere else in midfield, I was curious to see how Lukić would contribute in such a delicate role – I was positively surprised.

Since then, the Serbian has featured in 11 more games, 7 of which as a starter, and always in the role of playmaker. Increasingly, it has become clear that this position is very suiting to the kid’s qualities: he possesses an innate vision for vertical passes, as well as the astuteness needed to know when to not take such risks. Differently from Valdifiori, who is Torino’s regular starter in the same position, Lukić lacks in what is the Italian’s major virtue: long through balls. Whilst the Italian attempts six per game, Lukić averages a mere 1.8 – this is a trait that the 20 year-old must try to develop if he is to succeed as a high-class regista [Stats via WhoScored].

Equally, Lukić’s defensive support is much more effective than Valdifiori’s. The Serbian intercepts double the amount of passes per game (circa two, as opposed to one), which is another indication of his tactical awareness. Moreover, he is dribbled past only half as much as the Italian [WhoScored]. Despite his non-overwhelming physical presence, Lukic outsmarts his opponents, providing solid defensive coverage. On this note, I remember a specifically impressive performance of his during Roma-Torino, a difficult match in which he was trusted with the keys to the Granata midfield. Now, despite the overall four-one victory for the giallorossi, Lukic was regarded as one of the best performing amongst his men, and was noted for a ridiculous defensive intervention on none other than Mohamed Salah – one does not simply anticipate Mohamed Salah, let that be noted.

Considering the limited game time in Italy so far, any judgment of Sasa Lukic cannot be but speculative, at least to some extent. However, due to having witnessed him play at the very beginning of his career – I was lucky enough to see what was his debut goal for Partizan – I believe that this account is a thorough one, truthful to what are the real characteristics of the player in question. Lukic has above-average technical and tactical means, which will enable him to excel in any midfield position, as well as the rare virtue of vision, which, if exploited, will pave his way to becoming a fine playmaker – a rarity in modern football, which Torino’s Siniša Mihajlović has a duty to try and craft.