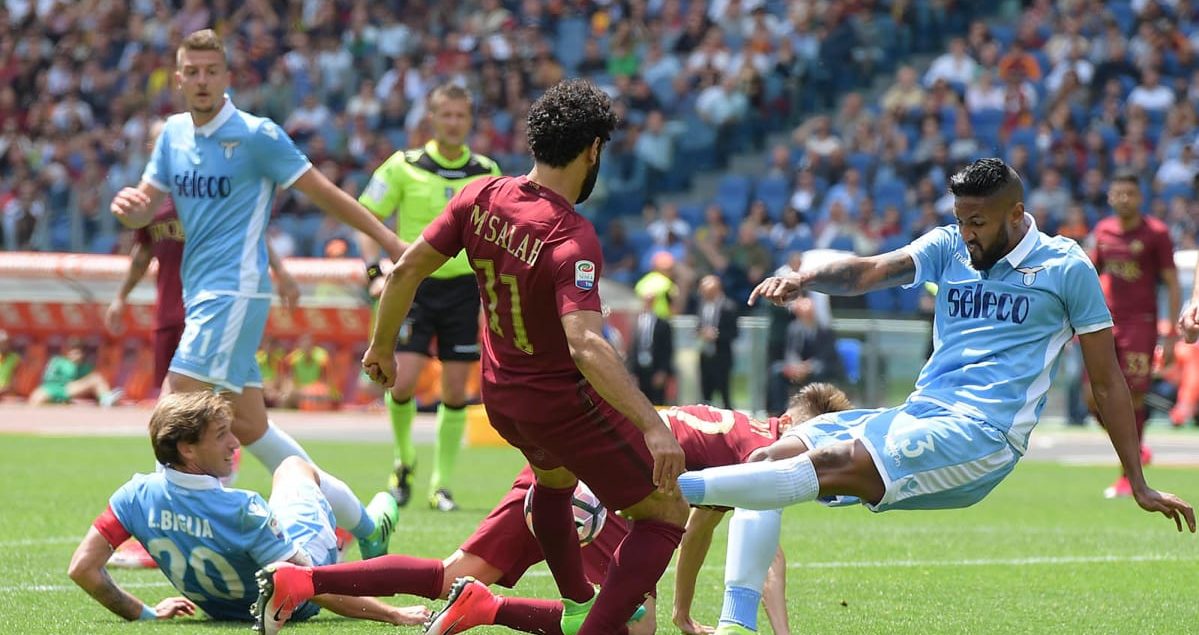 Yesterday’s Derby della Capitale threw away any hopes of the league title remaining for Roma, with the gap between current table-toppers Juventus extending to 9 points after the Bianconeri’s 2-2 draw with Atalanta in Bergamo and the Giallorossi’s shocking 1-3 loss to Lazio at the Stadio Olimpico.

Roma captain Francesco Totti sought to end his last Derby della Capitale on a high with an expected win for the Giallorossi, but unfortunately, it wasn’t the case on Sunday.

Roma started out the match determined with their top goal scorer of the season Edin Dzeko getting his shot denied by Lazio goalkeeper Thomas Strakosha just two minutes after kick off.

It was the 22 year old Keita Balde who put his name first on the scoring sheet, scoring an impressive goal at the 12th minute getting past Emerson Plamieri and then nutmegging Federico Fazio before the ball finally getting past Roma goalkeeper Szczesny.

However, De Rossi equalized with a controversial penalty call in the final stages of the first half after Wallace being wrongly thought to have fouled Strootman, scoring his first derby goal since 2009.

This draw didn’t last long though as Basta scored for the first time in Serie A since March 2014, where he scored against none other than Roma when he was still at Udinese.

The night kept going worse for Roma as Rudiger was shown a straight red card after a reckless challenge on substitute Filip Djordjevic, ending the game exactly the opposite way of how Totti wished for his last derby.

Spalletti took his time until finally giving the Derby’s top scorer Francesco Totti a chance to try and save the day on his last Derby, but he was let down by the several unfortunate events that occurred leading up to Rudiger’s sending off..

This loss came as a surprise to many because Roma have won 7 of their last 8 games in all competitions, and their last loss to Lazio came in November 2012.

Both teams have some decisive games left to play that could have a great impact on how the table standings end, especially now that Roma are second, just one point ahead of Napoli who secured a win against Inter Milan at the San Siro, and with the both of them battling for second place and the automatic entry into the Champions League group stages.

This result means Juventus now only need 4 points to mathematically secure their record sixth consecutive Scudetto, they host Torino next at home.

Head to Head stats between Roma and Lazio: