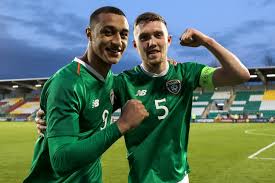 For the record, this match wasn’t as straightforward or lopsided as the 4-1 scoreline may suggest. Ireland got off to a quick start with two goals inside the first five minutes, and while they remained comfortable throughout the following 88 minutes, China showed some promising signs in possession and had a few impressive standout performers.

The most impressive China performer on the night was right back Lei Tong. The 21-year-old was quick to intercept, boasting some fancy footwork to get down the byline. He was quick to snuff out threats and made some crucial tackles, and after Aaron Connolly, who created danger whenever he got on the ball, came off, he had more attacking opportunities late on in the second half. He overlapped on the right side and played a dangerous ball into the box, and late on in the match, he quickly combined, advanced into the final third and played a daring cross into the box.

Apart from Tong, China’s Binbin Chen also created some dangerous opportunities on the ball, offering up deadly whipped set pieces, one of which resulted in China’s only goal. He cut in from the right, impressed with lovely footwork, and offered some nice crosses and cross-field passes.

Still, this was Ireland’s game to lose right from the start. Part of this was due to Conor Masterson. Masterson set up the first goal with a lovely long ball into Brighton’s Connolly, who then found Zachary Elbouzedi in the box. A few minutes later, Masterson’s glancing header bounced into Connolly’s path, who made no mistake with the finish. Apart from a few powerful headers and pinpoint long balls towards Connolly, Masterson also made a crucial goal-line clearance in the first half. With his Liverpool contracting expiring this summer, he’ll be keen to put in more top performances and earn a contract at a new Premier League side.

While Masterson made some important actions, it was his defensive partner Dara O’Shea who had his hands full. Having impressed at Exeter on loan from West Bromwich Albion this season, O’Shea continued his fine form, with some brilliant tackles, strong clearances, and good long balls into Adam Idah up top. He was simply impossible to beat in the air, constantly coming off his line to bat away danger. With the Baggies failing to go up, expect a few Premier League clubs and perhaps Celtic to be in for his services this summer.

All of Ireland’s starters impressed to a certain degree, but one that deserves a special mention is Aaron Connolly. For the first goal, he skipped past Tong on the left flank and set up Elbouzedi with a lovely pass through the middle. With fancy footwork, a brutal change of pace, and aggressive runs to get in behind the China defense, he was a nightmare for China all night.

While he did pick up a brace with two well-placed penalties, Adam Idah’s influence stretched far beyond his goals. This was, without a doubt, the most dominant center forward performance of the tournament so far. Ireland’s main way of beating China’s pressure and breaking the lines was long balls into Idah, which Idah would control and lay off into his fellow attackers with deft headers or passes.

His upper-body strength and control was simply too powerful for the Chinese defense, and between his deadly runs in behind and his tricky dribbling, the Norwich striker was a handful. Furthermore, despite his bulky frame, Idah also managed to swivel past the defense with excellent turns, before bulldozing past the defense and evading tackles with lovely footwork.

Thanks to Idah’s excellent hold-up play, impressive strength, and lovely work on the ball, Ireland could bypass China’s midfield with long balls into the bulky center forward. Expect the Irish youngster to play a key role for the senior team soon.